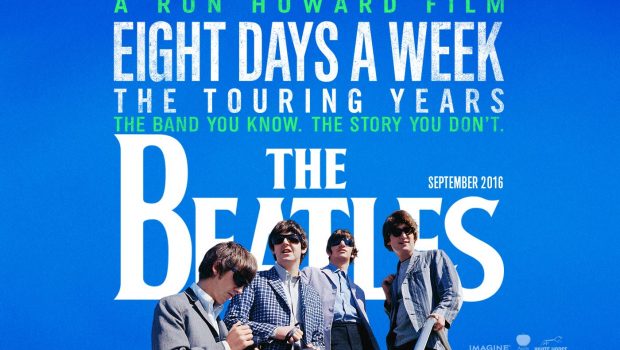 AUSTRALIA #1 FOR THE WORLDWIDE RELEASE OF THE BEATLES: EIGHT DAYS A WEEK – THE TOURING YEARS* | DUE TO POPULAR DEMAND THE CINEMA RELEASE WILL EXTEND

STUDIOCANAL is thrilled to announce Australia’s box office result is Number 1* for the worldwide release of THE BEATLES: EIGHT DAYS A WEEK – THE TOURING YEARS. Beatlemania is alive and well in Australia as audiences flock to see never-before-seen footage of the Fab Four in the latest film from Academy Award® winning director, Ron Howard. Following a highly successful opening weekend, major exhibitors across Australia will now extend the one-week-only theatrical season of the music documentary with encore screenings.

Due to popular demand and reports of audiences spontaneously applauding the film, the encore screenings will commence Thursday 22 September, with exclusive-to-cinema Shea Stadium concert footage screening after the feature at all cinema locations. The Beatles concert at Shea Stadium on August 15, 1965, was the first rock concert staged in a stadium in front of more than 55,000 people. The event was filmed using fourteen 35mm cameras by Ed Sullivan Productions and Brian Epstein; for the  first time the fully restored, remastered, 30-minute performance is available to screen with the film.

EVENT Cinemas General Manager Alternate Content, Alison Deboo says, “Working with STUDIOCANAL on such an iconic piece of music history along with the pedigree of Ron Howard gave us the opportunity to provide the ultimate Beatles big screen experience to our EVENT Cinema audience. THE BEATLES: EIGHT DAYS A WEEK – THE TOURING YEARS brings to the audience young and old a true insight into the life of The Beatles during the height of their touring years and is a MUST SEE! Due to popular demand we are excited to extend our season from this Thursday to ensure everyone has the opportunity to experience history in the making.”

Palace Cinemas Programming Director, Kim Petalas says, “The Palace Cinemas audience has embraced THE BEATLES: EIGHT DAYS A WEEK – THE TOURING YEARS and we fielded so many enquiries for encore screenings. It was so pleasing to see original Beatles fans, and also a younger audience discovering Beatlemania, pack our cinemas last weekend.”

Village Cinemas Alternate Content Manager, Sally Mason adds, “We were proud to join STUDIOCANAL in bringing Ron Howard’s outstanding THE BEATLES: EIGHT DAYS A WEEK – THE TOURING YEARS to the fans, to enjoy it together on the big screen across our Village Cinema circuit including Gold Class. Response and reactions to the film were so incredible, it prompted us to schedule extra shows for a further week to meet demand.”

Chief Executive of STUDIOCANAL Australia and New Zealand, Elizabeth Trotman says, “It is a thrill to reinvigorate Beatlemania and see fans of all ages head to cinemas to experience the pure musical joy of The Beatles. Sharing the theatrical exclusive Shea Stadium concert footage with audiences is a highlight; it is wonderful to see such enthusiasm from cinema-goers and strong support from our exhibition partners.”

THE BEATLES: EIGHT DAYS A WEEK – THE TOURING YEARS covers the first part of The Beatles’ career (1962-1966) – the period in which they toured and captured the worlds acclaim. Ron Howard’s film explores how John Lennon, Paul McCartney, George Harrison and Ringo Starr came together to become this extraordinary phenomenon, “The Beatles.”  It examines their inner workings – how they made decisions, created their music and built their collective career together – all the while, exploring The Beatles’ extraordinary and unique musical gifts and their remarkable, complementary personalities. The film focuses on the time period from the early Beatles’ journey in the days of The Cavern Club in Liverpool to their last concert at Candlestick Park in San Francisco in 1966.

Featuring rare and exclusive footage, the film was produced with the full cooperation of Paul McCartney, Ringo Starr, Yoko Ono Lennon and Olivia Harrison, all of whom attended the star-studded world premiere in London last week.

STUDIOCANAL Australia is the distributor of THE BEATLES: EIGHT DAYS A WEEK – THE TOURING YEARS, in cinemas now.

*Based on a traditional pro rata basis for measuring the box office, Australia is the Number 1 in the world.