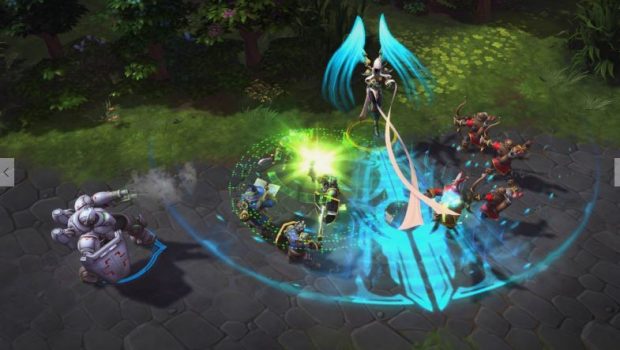 Auriel Enters the Heroes of the Storm Nexus

Auriel is the newest ranged support Hero to join the Nexus, and brings with her a holy host of new abilities and mechanics. As the eternal embodiment of hope, it should come as no surprise that her favoured role on the battlefield is one of a backline support, bestowing clarity, hope, and healing to her allies through the use of her Cord of Hope, Al’maiesh. This archangel is no stranger to the chaos of battle, however– countless hell demons could certainly attest to her deadly abilities during the Eternal Conflict. Now descending from the High Heavens and into the Nexus, we will see what comes of those who hope to stand against Auriel!

Auriel’s talents include, but are not limited to, battlefield basic abilities such as Sacred Sweep, covering an extensive area with sacred power, and dealing 80 damage to enemies, as well as an additional 160 damage to foes caught in its centre. Ray of Heaven allows her to heal allied Heroes for the same amount of energy she has consumed, while her Heroic ability, Resurrect, sees her channel the spirit of a dead ally, bringing them back to life with 50% of their maximum health at the location of where they fell in combat – a first for Heroes of the Storm.

Visit the Official Heroes of the Storm blog here to learn more about her gameplay style – including strengths, weaknesses, and talent picks.