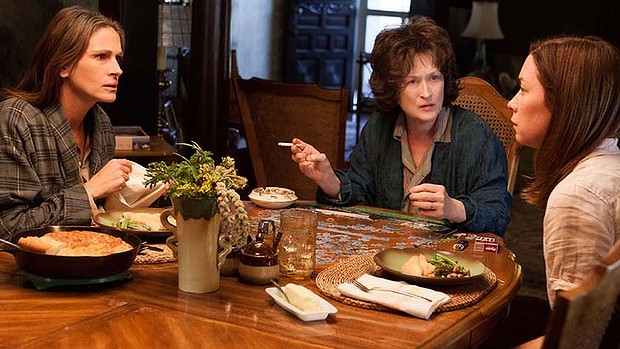 Pulitzer Prize winner, August: Osage County could not possibly have made its switch to the big screen in a more powerful way. August: Osage County doesn’t hold anything back and its family politics are a heavy burden on the audience, but in the best possible way. It is almost confusing as to what type of film it actually is. Too heavy and emotionally draining to be a comedy, but too many laughs and speckled with black humour to be labelled a drama. However, there is no way of getting around the appreciation for its wonderfully adapted screenplay and also its quality performances, especially by the consistently brilliant Meryl Streep.

As the film opens on Beverly Weston (Sam Shepherd) describing how he and his wife Violet (Meryl Streep) have an unspoken agreement in their marriage where he drinks and she takes pills, the foundation is set for understanding that this is one intense family. When Beverly disappears, the whole family is reunited, which brings all the problems they have with one another to a head. The Westons three daughters, Barbara (Julia Roberts), Ivy (Julianne Nicholson) and Karen (Juliette Lewis), who are all incredibly different try to keep the peace for their parents, but trouble finds them whether they like it or not.

As the poster for August: Osage County suggests, this film is very much like being seated at somebody else’s family dinner table and being confronted with all their problems. It is incredibly uncomfortable and often cringe-worthy and embarrassing, but there is something so wrongly entertaining and exciting about it. You want to go and tell everyone you know about it, if you didn’t feel so tired and emotionally drained from it. This is August: Osage County to a tee. It is wonderful and exhausting.

The dialogue is brilliantly worded in a very well-constructed screenplay, but this is only to be expected considering the author of the play, Tracy Letts also wrote the screenplay. The conclusion of the film doesn’t offer any uplifting message, which will not be to the liking of those who want to be given atonement. The opportunity is there to take from the film what you think it is trying to tell you. Whether it be that children exhibit the same behaviours as their parents, whether they see it or not, that you can’t choose your family members, that we are all covering up secrets, or even if this is just a source of entertainment and you are not supposed to take anything from it, it is really up to the individual to decide. Visually there are some incredible shots of the Oklahoma country side throughout the film. It is really quite an oxymoron as the countryside is so peaceful, yet inside the Weston’s house it is complete mayhem. 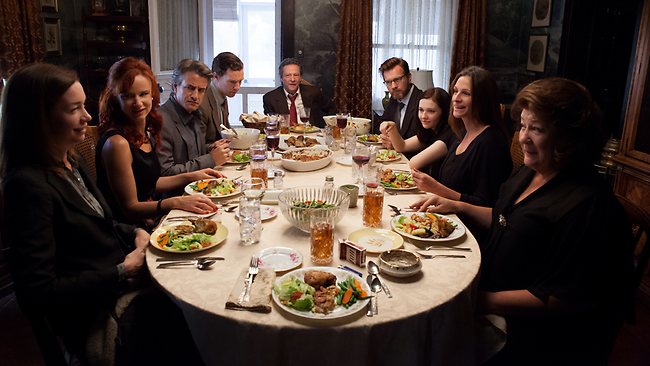 In conjunction with the wonderful dialogue, it is the incredible performances of complex characters which really make August: Osage County a success. Meryl Streep is such a powerful force as the head of the Weston family. Violet is not a pleasant lady, but she commands everyone’s respect as the family’s matriarch. Streep is incredible in this role and she brings out so many different facets of Violet’s personality. She is a thrill to watch and highly entertaining, but always leaves you feeling unsettled and just a bit scared.

Julia Roberts also does her best acting in years. Her performance is so controlled and maybe a little too neat at times, but still very powerful. Her character is very much like her mother as she is very complex and Roberts is able to give us so much information about Barbara just through little moments throughout the film. Roberts and Streep have perfect chemistry as well, playing the tense mother and daughter roles very well. The chemistry also between Roberts and her on screen husband, Bill (Ewan McGregor) and daughter, Jean (Abigail Breslin) is perfect. The scene between the three of them outside at night is unforgettable. 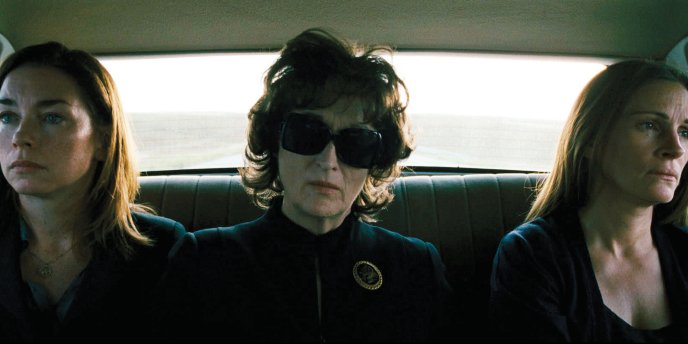 Every actor does very well in the film. Benedict Cumberbatch is particularly impressive, as his character of Little Charlie shows the true anxiety of being in a family like this. The scene at the bus stop between he and his father, played by Chris Cooper, is perfect representation of how any normal person would react having to be subjected to this. Cooper is also wonderful, as his performance is not over the top, but subtle and powerful in its subtlety.

While often uncomfortable due to its burdening weight, August: Osage County is powerful in a most welcomed fashion with memorable performances by a truly stellar cast.

Summary: There is no way of getting around the appreciation for its wonderfully adapted screenplay and also its quality performances