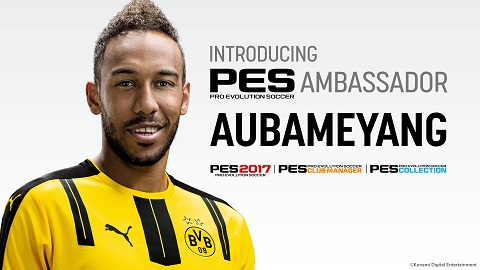 Aubameyang’s participation is an honour for KONAMI and a highlight for the star striker. “I saw for myself the love for PES 2017 that shines from its many fans when I attended gamescom, and am proud to be part of the Ambassador program KONAMI has set up,” said Aubameyang. “PES LEAGUE takes the game to another level making it possible to play against PES players from all over the world. To be selected to work with this talented team is amazing, and I look forward to sharing ideas on how we can take the series forward and show its stunning gameplay to an even wider audience. This is just the beginning though for PES LEAGUE and there are some big announcements coming soon so watch this space.”

Aubameyang, is known for his incredible speed, having clocked 30 metres in 3.7 seconds, and his capability of playing as a forward or a winger.

PES LEAGUE originally started in 2001 by KONAMI as a national tournament in France, and later broadened its scope to become a full-scale global tournament. The PES LEAGUE has seen huge growth in recent years, and the 2016/17 event will be even bigger with each player looking to represent their region and take the title from current holder, Rachid Tabane – the first person to retain a title since the league launched. Full details of KONAMI’s exciting plans for this year’s PES LEAGUE will be announced early December.

PES 2017 launched for PlayStation®4, XboxOne™, Windows PC, PlayStation®3 and Xbox 360™ on September 15th, and the myClub mode adds huge depth to the stunning on field action. The mode was introduced in PES 2015 and has proved incredibly popular with the series’ many fans. myClub rewards strong match day performances with GP (GamePoints) which can be used to spend on new players to bolster a team. Users can now also purchase myClub coins for use in the game via affordable micro-transactions, and the full currency system is now up and running enabling players to vie for the world’s best talent using PES 2017’s network of top agents.