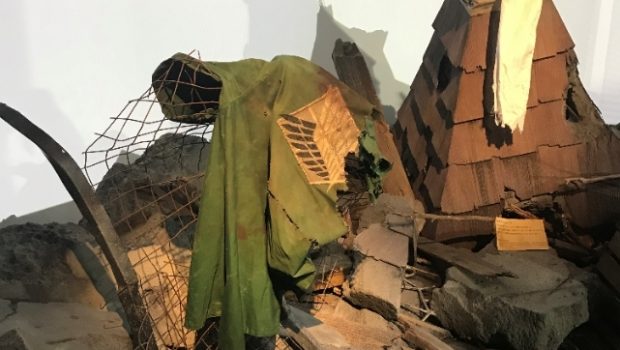 Summary: An amazing tribute to an amazing series!

Since living in Japan this past year I’ve had some pretty amazing experiences. Now I can add the Shingeki no Kyojin (Attack on Titan) FINAL Exhibition to that list. The exhibition runs from July 5, 2019 to September 8th, 2019 at the Mori Art Museum in Roppongi Hills, Tokyo. I got the chance to attend the special press preview, and I wasn’t disappointed. 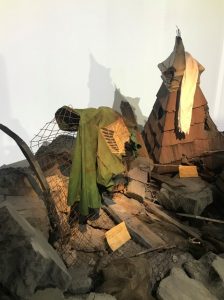 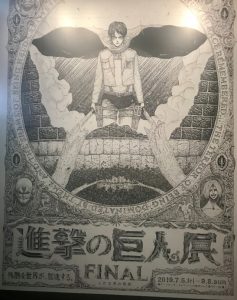 The adventure started in a room strewn with rubble. The level of detail was impressive—though this massive heap of debris looks chaotic, nothing here was placed by accident. Behind the wall of debris is a screen which alternates between projecting a bleak cityscape, complete with ambient lighting and weather effects (a thunderstorm started up while we were there), to animated scenes of titans fighting. We were greeted by costumed actors portraying Levi and Eren, when they were suddenly attacked by a mini titan! Fortunately, Mikasa swooped in at the last minute to save the day. 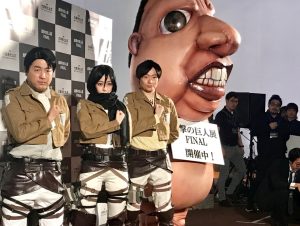 After this initial introduction we were free to roam the exhibit and look around. Let’s take a look at what they’ve got on display.

When you first enter the exhibit you’re given a choice (spoilers for season 3 ahead, FYI, if you haven’t caught up on the series yet). You have to choose whether you were born inside or outside the walls and once you make your decision you can’t turn back. The path you choose determines which pictures you see for the first little part of the exhibit (fortunately, it isn’t a long section so you don’t miss much by picking one choice over the other). For instance, if you choose the blue path and say you were raised outside the walls, you’re treated to information about the devils on Paradise Island. 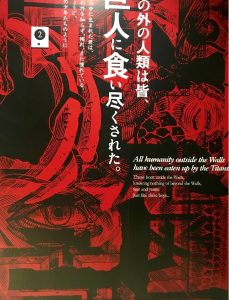 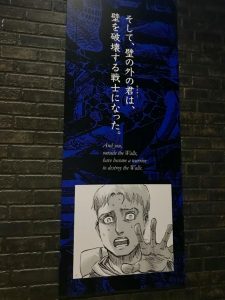 The paths converge and lead into the rubble strewn room I mentioned earlier. Among the debris you can spot all kinds of artifacts. A ragged Survey Corp cape hanging off a post, Annie’s ring laying on the ground, Sasha’s pack (complete with a potato) sitting open spilling its contents, and Mikasa’s scarf. I won’t list all of them here in case you get a chance to check out the exhibit and half the fun was exploring and noticing these items. 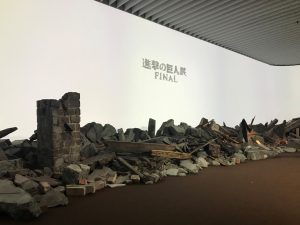 (We weren’t allowed to take pictures in here while the screen was active. But here’s what it looks like without all the ambient effects. Not quite as impressive, but still pretty cool.)

Once you’re done exploring the ruins, you step out into a gallery filled with framed panels from the manga along with the original dialogue as written by Isayama Hajime. 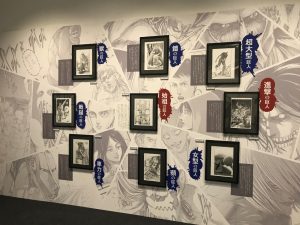 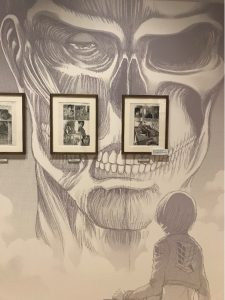 Your path eventually leads to an area behind a black curtain without any images whatsoever. Here, you’re given audio from the final moments of the series as imagined by the creature and you’re asked to visualize the scene. We heard sounds of explosions, fire, people shouting. There were no voices here, but it still felt exciting and dramatic. I can’t wait to see what the final scene actually looks like! 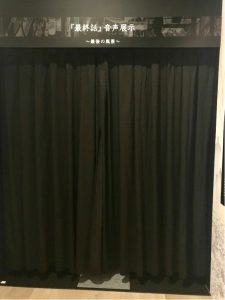 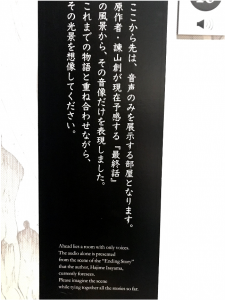 You exit out into a white room filled with more panels and character drawings. On a screen in this part of the exhibit you can watch an interview with Isayama Hajime on a loop, where he discusses various thoughts on the series—from its humble beginnings to where it is now. 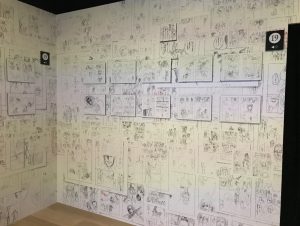 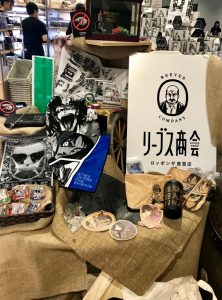 Next is the well stocked gift shop where you can purchase a wide assortment of Shingeki no Kyojin merchandise (I picked up a Levi, Mikasa and Survey Corps travel sticker for my laptop. My wife got Shingeki no Kyojin tea and a Hange pen).

After you’re done with the exhibition, why not go and relax in the Attack on Titan themed cafe? Run by the Reeves Company, this cafe features a menu based around the series and some pretty impressively designed snacks, foods, and drinks. Unfortunately they weren’t up and running for the press event so we didn’t get a chance to sample anything, but everything looked pretty amazing! 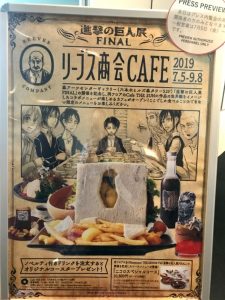 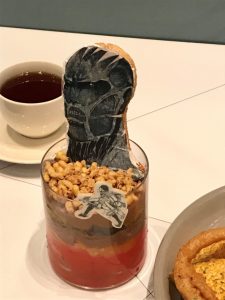 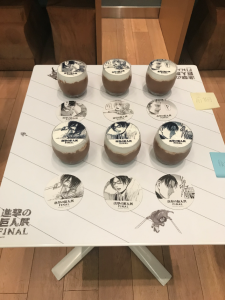 From start to finish, this event was a fantastic experience. It’s mostly presented in Japanese (there’s an audio guide, but no English option), but even knowing only the most basic Japanese I was not disappointed with my visit. There’s also enough English on most of the signs you’re never left feeling totally lost.

If you’re in Japan and you’re looking for something to do between July 5th and September 8th, 2019, I definitely recommend checking it out! Just don’t forget to dedicate your heart! 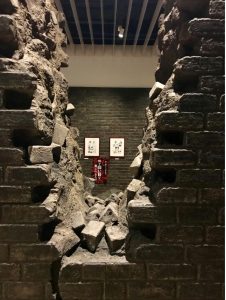 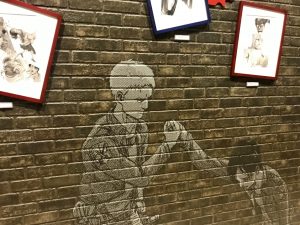 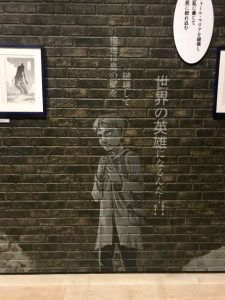 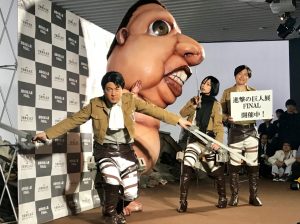 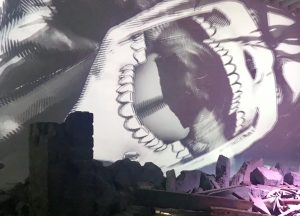 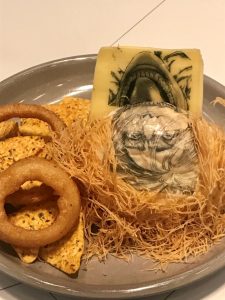