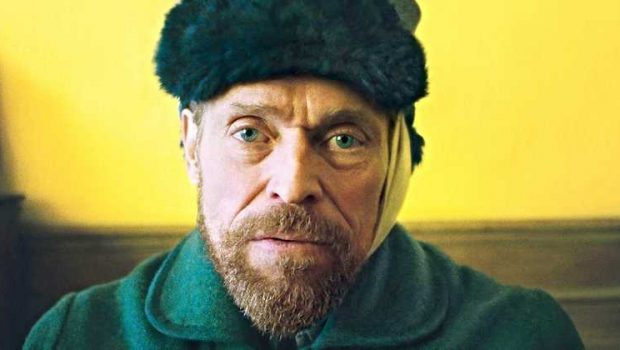 In the collective consciousness of society, Vincent van Gogh is remembered as the famous Dutch painter who cut off his own ear. Sadly, for many people this is the beginning and end of van Gogh’s story. Their knowledge of his work may also be limited to scenic works of flowers and a self-portrait. For a long time, this applied to me too.

However, all good films expand our minds and understanding of foreign and impossible ideas. Painter and filmmaker Julian Schnabel (Basquait, Before Night Falls) has continued that tradition with the biopic At Eternity’s Gate. It is a beautiful film about van Gogh’s final days before his confusing and tragic death at age thirty-seven. Despite forgoing a Dutch accent and being significantly older, actor Willem Dafoe, who is sixty-three years young, is remarkably convincing as van Gogh.

An equally talented supporting cast includes a subdued Rupert Friend as van Gogh’s supportive brother and Mads Mikkelsen (Hannibal) as a priest who has been sent to determine the artist’s mental state after being institutionalised for erratic behaviour. ‘Maybe my paintings are for people who aren’t born yet,’ van Gogh says to the man of god as if addressing the audience and posing the same statement.

Director Schnabel ensures that his cinematic formal choices are apparent to van Gogh and the audience. For example, he photographs the faces of the characters in intimate close-ups as they brood over art, or in Vincent’s case, misery and art. While the archetype of the damaged artist is a cliché today, van Gogh was as troubled as he was talented. Fortunately, Schnabel’s lens does not deter from exploring the painter’s personal demons. 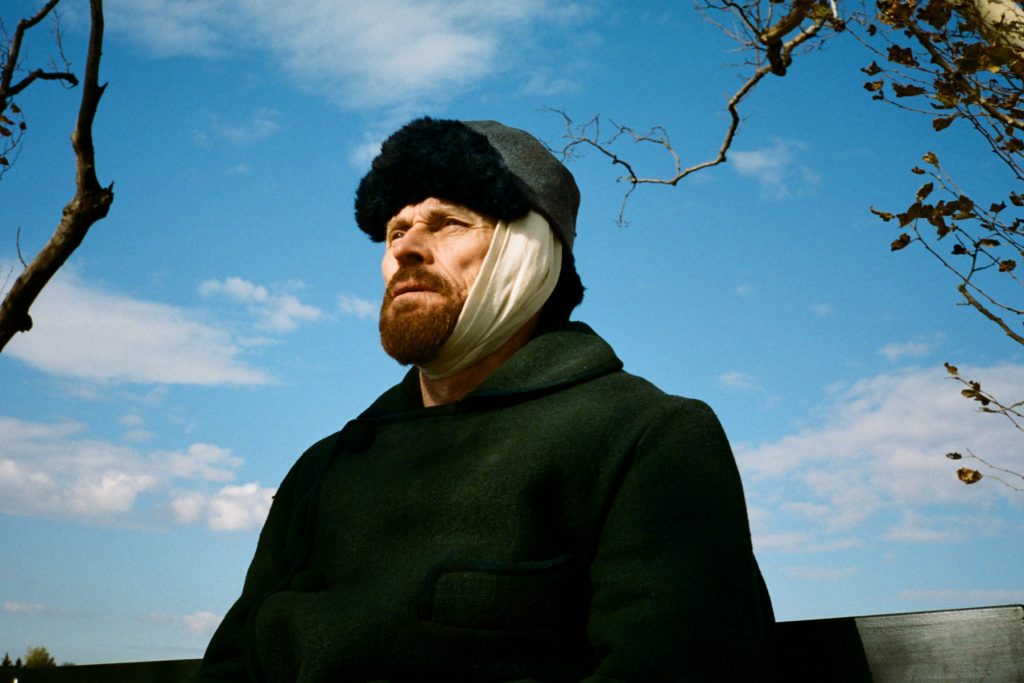 Schnabel’s formal selection of handheld cameras also provides a wall-breaking, metafictional quality to sequences. We literally follow Dafoe through the real-life locations of Arles and Auvers-sur-Oise. These are the areas that van Gogh trudged through with an easel and canvas on his back. The closeness of the camera examines the actor’s facial lines, which is usually a physical attribute secluded by Hollywood. Fortunately, this is not The Fast and the Furious series.

Additionally, At Eternity’s Gate makes bold strides towards unveiling the origins of van Gogh’s most famous works. When shyly talking with a barmaid, he chooses to evade her affections. Instead, he asks a bearded postman to pose for a portrait. Revelations for art lovers are feverishly placed throughout the film, although I am unsure of their authenticity. In one instance, van Gogh’s frantic painting of a pair of ragged boots is attributed to a day of fruitless exploration of the French countryside. 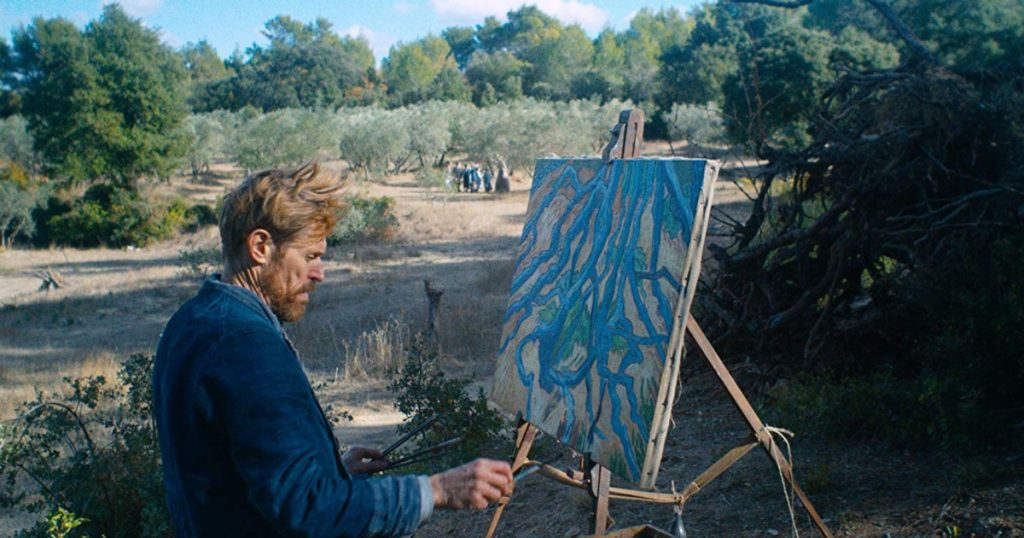 While van Gogh’s art is loved by millions of people today, he was a broken outcast as he created his masterworks. Consequently, Dafoe plays him as a mentally troubled, sad, lonely figure. Schnabel and co-writers Jean-Claude Carrière and Louise Kugelberg successfully complement Dafoe’s interpretation. Their script does not romanticise van Gogh’s emotional pain and loneliness. They have also visualised his emotions through a dark atmosphere, particularly the scenes draped in muted colours that signify van Gogh’s deep depression.

Van Gogh gazes at the beautiful scenery of Southern France as if he is pain. It is as though he cannot handle what he is seeing unless he immediately puts his brush to the canvas. ‘You’re rushing!’, advises French artist Paul Gaugun. He is played by the excellent character actor Oscar Isaac (Inside Llewyn Davis; Star Wars: The Force Awakens) who also chooses not to pursue an accent. Van Gogh counters Gaugun by explaining that art needs to be created in the heat of the moment to preserve one’s inspiration. 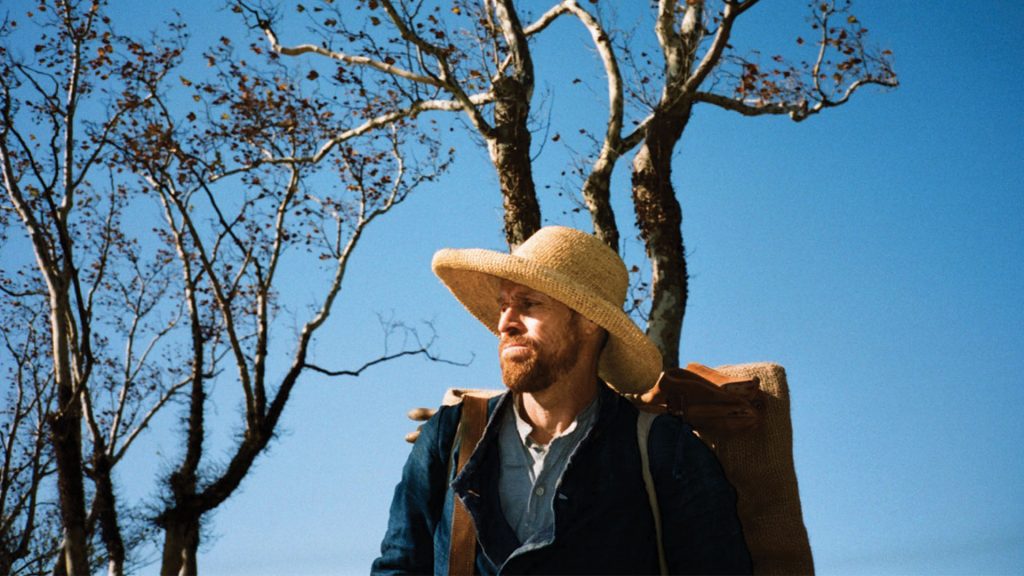 For those unfamiliar with van Gogh’s life, and have not seen the stunning animated feature Loving Vincent (2017), the film’s storyline might seem choppy. One detraction is that the artist’s death is overlooked. Otherwise, this is a fantastic film whether you are well versed in his works or not. It captures the pain of a tortured artist by Dafoe giving a career-defining performance where his face twists in agony at the thought of his own existence. At Eternity’s Gate is a masterpiece that can hopefully achieve the same level of appreciation as van Gogh and his timeless work.

Summary: At Eternity’s Gate is a masterpiece that can hopefully achieve the same level of appreciation as van Gogh and his timeless work.