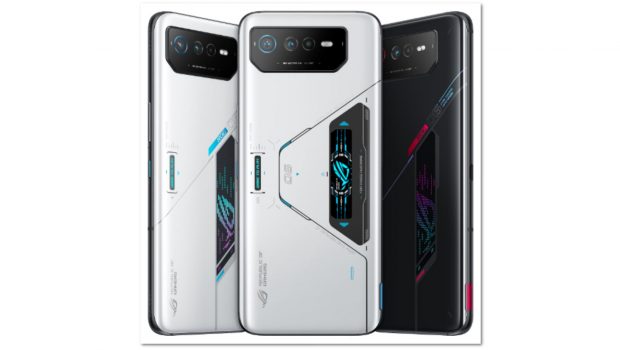 ASUS Republic of Gamers (ROG) hosted the ROG Phone 6: For Those Who Dare virtual launch event to reveal the new ROG Phone 6 series of gaming smartphones, along with new models in the ROG Cetra series of True Wireless gaming headphones and ROG Delta series of gaming headsets, plus a collection of ROG Phone 6 accessories. The event concluded with an all-star show match, where 14 well-known influencers from 8 different countries competed on PUBG MOBILE to showcase their skills on the world’s premium gaming smartphone.

The new ROG Phone 6 series includes the ROG Phone 6 and the ROG Phone 6 Pro, the most powerful ROG Phones ever made. They are powered by the latest flagship Snapdragon® 8+ Gen 1 Mobile Platform with up to 3.2 GHz CPU clock speeds, up to 18 GB of LPDDR5 RAM, and up to 512 GB of storage. The upgraded GameCool 6 cooling system features novel 360° CPU cooling technology to unleash maximum sustained performance. A monster 6000 mAh battery capacity provides extended battery life for long game sessions. Supreme visuals are delivered by a 6.78-inch Samsung AMOLED HDR10+ display that uses exclusive ROG tuning technology to achieve an amazing 165 Hz refresh rate, an industry-leading 720 Hz touch-sampling rate and a world-beating 23 ms ultra-low touch latency. The new series is accompanied by a full array of exclusive ROG Phone 6 accessories, including the new AeroActive Cooler 6 and ROG Phone 6 Glass Screen Protector.

The ROG Phone 6 series is powered by the latest flagship Snapdragon 8+ Gen 1 Mobile Platform, a premier-tier powerhouse that delivers power and performance enhancements for the ultimate boost across all on-device experiences. Snapdragon 8+ Gen 1 offers amped-up gameplay — unleashed with the full suite of Snapdragon Elite Gaming® features plus an improved Qualcomm® Adreno™ GPU — delivering a more than 50% performance improvement when compared to the Snapdragon 888 that powered the ROG Phone 5. The device is backed by up to 18 GB of LPDDR5 RAM and up to 512 GB of storage, for the most reliable and stable gaming experience.

The upgraded GameCool 6 cooling system includes 360° CPU cooling technology, a 30% larger vapour chamber and 85% larger graphite sheets, along with a centered-CPU design to increase heat dissipation from the core. Combined with the new performance manager in Armoury Crate, the ROG Phone 6 series allows gamers to tune performance settings for different games, giving them a competitive edge in any gaming scenario.

For ultra-smooth and ultra-responsive gaming visuals, the ROG Phone 6 series is equipped with a 6.78-inch 165 Hz AMOLED HDR10+ display with an industry-leading 720 Hz touch-sampling rate and a world-beating 23 ms ultra-low touch latency. This astonishing display can be set to 60 Hz, 90 Hz, 120 Hz, 144 Hz, or 165 Hz for an unparalleled gaming experience. The superb visuals are tuned in collaboration with leading visual-processing company Pixelworks® for world-beating colour accuracy.

For even more advanced control possibilities, the AirTrigger 6 has been significantly upgraded. The ultrasonic sensors fully support various gestures, including new features such as Dual Action, Press and Lift, and Gyroscope Aiming.

The new Cetra True Wireless Pro is a wired / wireless dual-mode model featuring an ESS Quad DAC and an AI Noise-Canceling Microphone, giving exceptional in-game audio and communication with the freedom to easily switch between wireless and wired USB-C® modes.

For wired mode, ROG engineers also developed the innovative in-line audio optimiser with built-in ESS 9280 Quad DAC for exceptional audio with rich, detailed spatial sound. In addition, the AI Noise-Canceling Microphone reduces over 500 million types of background noise such as chatter, keyboard clatter and mouse clicks by up to 95% for crystal-clear voice communication.

The brand-new ROG Delta S Wireless is the first ROG dual-mode wireless gaming headset. It can be used in either 2.4 GHz or Bluetooth® modes for maximum flexibility when connecting devices. The concealed AI Beamforming Microphones with AI Noise Cancelation ensure impeccable voice pick-up and reduce background noise by up to 95% for clear in-game communication, providing comfort and style without compromising the quality of in-game communication.

After the event, ROG held an exclusive all-star gaming show match, where 14 influencers from 8 different countries — including Germany, UK, France, Italy, Poland, Denmark, Sweden, and Norway — competed in a 7 vs. 7 team deathmatch on PUBG MOBILE. Before and during the match, the influencers’ communities and audience had the opportunity to predict the winning team of the tournament as well as the influencer accumulating the highest in-game kill count, for a chance to win a ROG Phone 6.