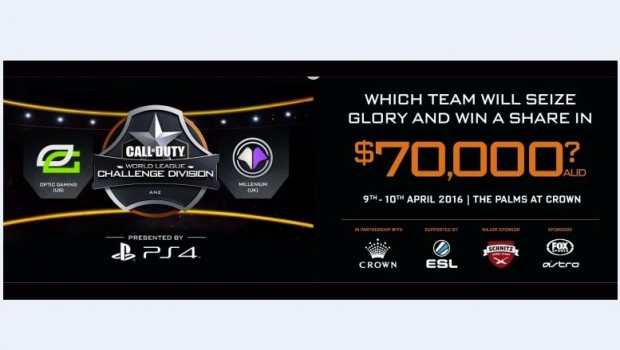 Be on-site on Saturday 9 April, to watch four teams in the Australia/New Zealand region battle it out in a fierce Challenge Division event.

Sunday 10 April hosts two of the juggernauts of international Call of Duty, including USA’s OpTic Gaming and Europe’s Millennium as they come face to face with Australia and New Zealand’s best to battle it out for a share in $70,000 AUD.
All players throughout the tournament will be gloriously wired for sound with the all-new ASTRO A40 + MixAmp TR system and the Call of Duty Black Ops III A40 TR Mod Kit.

A limited number of tickets are on sale now, available here. For more information please visit Crown Melbourne. The event will be livestreamed to a global audience, available to view online at http://www.callofduty.com/cwl. Further distribution channels to be announced soon.

For the more information, follow @ASTROGaming, CallofDuty.com/eSports and @CODWorldLeague on Twitter for the latest coverage leading up to and throughout the event.