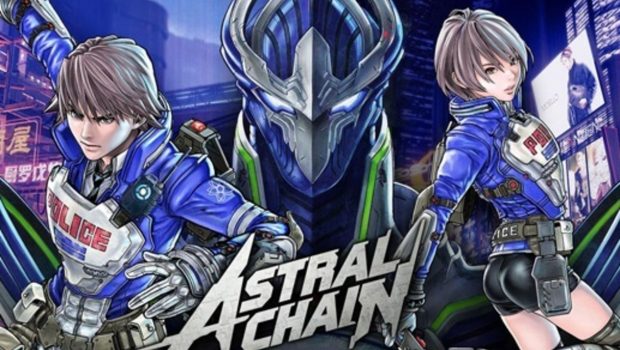 Summary: PlatinumGames have made another essential game. Fast paced combat, interesting characters and a lived in world. Don't miss out on Astral Chain

Astral Chain is a game that knows what it is. After an extended bout of fast paced, balletic combat, in which my character and its tethered Legion combined forces to reap destruction I find myself back in the Police Headquarters. Instead of the usual e-mail checking and water cooler conversation I’m tasked with putting on a gigantic dog costume and cheering up my fellow officers. Yep, I’m playing something designed by PlatinumGames.

By that I mean that Astral Chain is a game with an intuitive combat system, a fleshed-out world with interesting characters and a sprinkling of the batshit insane. It’s also another great success for the Nintendo Switch, who seem to be releasing must have titles every other week. 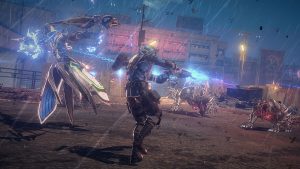 Taking place in 2078, humanity is on its last legs. Invading creatures from the Astral realm called Chimera, are kidnapping citizens and destroying vast swaths of the world. What is left of the population has moved to the Ark, a man-made fortified city that represents the last hope for the world. Unfortunately for the Ark, the Chimera invasion is starting to gain traction and it’s up to the Neuron Police Unit to help combat this. 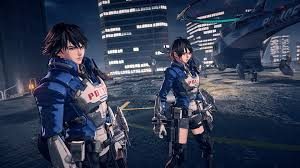 The Neuron Unit has managed to tame Chimera and bind them to a human operator. Together they do battle against the forces of the Astral Plane. The main protagonists are a set of twins who are new to the Neuron unit. Almost as soon as you meet your fellow officers there is an incident where everybody but the player character loses their Neurons. That means they are tasked with saving humanity.

Those expecting a Nier: Automata style meditation on death, rebirth and existence may be disappointed. Astral Chain is a straightforward Sci-Fi Action tale. There are a few narrative twists along the way but the majority plays like an above average anime tale. That’s not to say that the story and the characters are not enjoyable. In fact, the fleshed out cast of characters often elevate Astral Chain above its fairly basic plot. 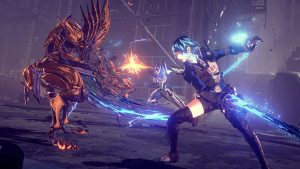 As the game progresses you will come to learn and care about your fellow Neuron officers. Especially if you undertake the various side quests available in most missions. What does ring as slightly odd is making the player character a silent protagonist. While silent protagonists can work in games, this feels like an odd choice. The protagonist’s main relationship is with their sibling, and involves many dialogue heavy scenes that are completely one sided. Later events have some of their gravity robbed from them when all your character can do is grunt in the face of an intense plot development.

If the narrative can’t match the heights of PlatinumGames best, the combat sure can. Fighting is a joy in Astral Chain, and one you won’t tire of.  The basic beats of striking, dodging and countering are all fluid and gorgeous to look at. The addition of the Legion is where Astral Chain really takes it up a notch. The Legion is tethered to you by a chain, and can be brought into combat at any time. From there the Legion will assist you in attacking enemies but can also be instructed to do a number of things. 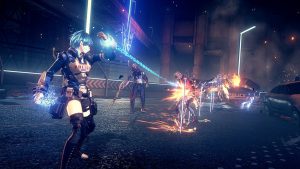 You can send your Legion to attack enemies while you sit back and shoot from a distance. Or you can get your Legion to sit back while you deal up close damage. You can also walk your Legion using the L trigger to do a variety of things. If you walk a circle around an enemy they’ll be bound by the chain, allowing you a few free hits. If you angle your chain around multiple enemies, your Legion can pull you so you deal damage to each enemy you’ve tagged with the chain. It’s a testament to the game design that after the initial learning curve this all feels natural and exciting. Executing perfect dodges and tapping your L trigger in time will result in a joint attack which never gets less satisfying to pull off.

Astral Chain isn’t just about combat though. As the main character is a police officer there is also a lot of work to be done processing and investigating crime scenes. This portion of the game is frequently delightful and helps break up the combat segments. Every case you will be tasked with interviewing the locals around the scene. They will provide keywords that get added to your detective’s notebook. At the end of the investigation you will be quizzed on the information you took and the more you get right, the more bonuses you will receive for combat upgrades. It’s fun, engaging and really helps the Ark feel like it is a living breathing city. 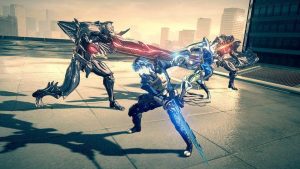 Usually once a case has been investigated, a “Gate” will open up, which sucks you in to the Astral Plane. This is where the game falters a little. The Astral Plane is made up of little dungeons that involve puzzles solved with Legion assistance, some combat, and some precision platforming. The platforming parts almost universally fall flat, as the controls just aren’t quite as intuitive as they are in the combat. You cannot die by failing a platform section, but watching the animation of falling again and again gets tiresome. This is particularly true when you are required to ride the Beast legion, who controls like someone who’s had a few too many bottles of wine.

The Astral Plane also suffers from a rather drab design scheme. It fits based on the narrative, but when the world of the Ark looks so lived in, the big red blocks of the Astral can’t help but feel unimaginative. It’s quite obviously the weakest part of the game. Well actually that would be the vehicle levels, but they happen much too infrequently to compete.

Astral Chain also suffers a little from repetitiveness. Every mission is broadly the same thing. Hang out at the Police Headquarters, investigate a crime scene, head into the Astral Plane, repeat. The scenery changes, but not the structure and it would have been nice to see a little more done to break up the sections of the game.

Ultimately, these flaws are outweighed by the awesome combat and the stylish world. The game looks gorgeous and makes the most of the Switch hardware. The soundtrack is catchy and the game is just a hell of a lot of fun to play. PlatinumGames and the Nintendo Switch have another hit on their hands.