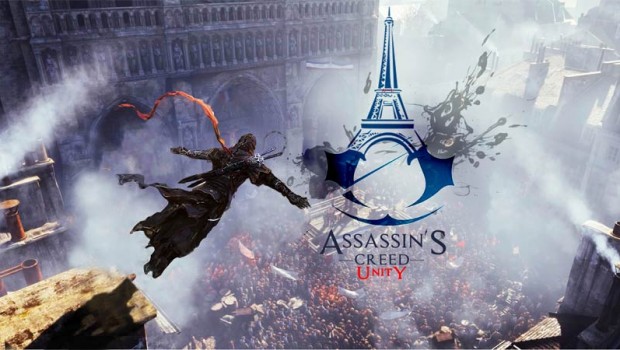 Although Assassin’s Creed Black Flag was the first of the Assassin’s Creed saga to arrive on the next batch of next-gen consoles (e.g. PS4 and XBox One), it also boasted one of the best stories to date, however it did suffer from some graphical issues. Apart from one of the best protagonists of the series since the first two games, Captain Edward Kenway, Assassin’s Creed Black Flag still felt like a PlayStation 3 title but thankfully the characters and story more than made up for this short-fall. Almost a year later, we have Assassin’s Creed Unity which follows Parisian Arno Dorian with the game set in the French Revolution as players are once again drawn into the deadly war between the Brotherhood of Assassin’s and the Templars. 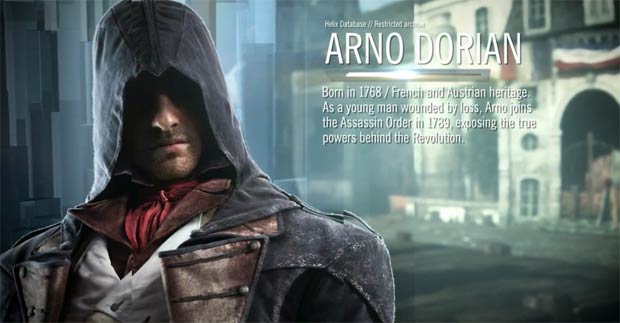 However the first thing that you notice about Assassin’s Creed Unity is the detailed graphics that really screams next-gen, especially as you climb the rooftops of Paris and enjoy the many sights and sounds of this very large city. Then you have the crowded streets of Paris itself and I don’t think I’ve seen so many additional characters in a game before which really blows your mind the first time you experience it. Needless to say it’s probably the most detailed open-world sandbox experience to date in the Assassin’s Creed franchise. I also like the inclusion of real-world people as such as the Marquis De Sade which adds to the realism of the story and is a little more grounded than Black Flag. To complement the story of Arno, the game boasts some very amazing cutscenes that merge well with the in-game graphics.

So like the previous games, players control a newly appointed assassin by the name of Arno Dorian who becomes embroiled in the never war between the Brotherhood of Assassin’s and the Templars. Unfortunately those pesky Templars are up to their nefarious activities again with this current storyline being linked back to the real-world French Revolution which makes the perfect back drop for this series. Interestingly enough, in terms of the protagonist of Unity, Arno Dorian actually works quite well, although he is lacking a little of the charisma that Captain Edward Kenway had from the previous game but he is still enjoyable. In terms of the previous games, this game is a continuation of the Abstergo storyline and commences with a small tutorial to teach the player how to control Arno with the new gaming engine. 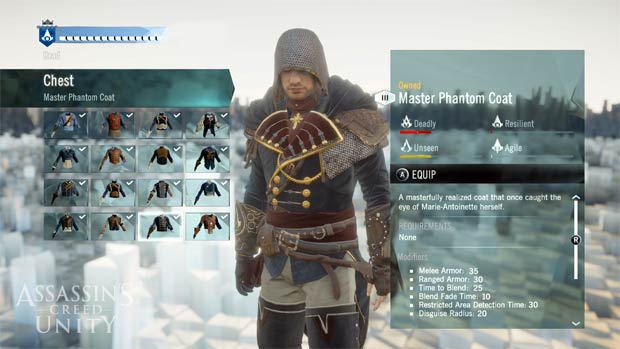 Then you have the new gameplay. As Parkour played a key component to the previous games which was quite realistic, Assassin’s Creed Unity takes it to a totally new level, especially how Arno’s clothes move with all his circus-like moves. Combat has also received a makeover that feels sturdier and less clunky as you attack and parry your way to victory. To add to Arno’s arsenal, besides his deadly weapons (including a dual sword and gun combination… sweet), the player also has the ability to upgrades his abilities that by the end of the game will turn you into a lean mean killing machine.

In terms of the revamped combat mechanics especially the counters, they feel a lot smoother which is more evident when you’re fighting more than 2 enemies at once. The AI is more realistic but some of those boss battles are very challenging. Add in smoke bombs, stun grenades and lots of other weapons and you have all the tools needed to complete your missions. Another difference is the customisation aspect of the game that when Arno levels up, he has the ability to unlock additional weapons and skills which even includes costumes. The only drawback of this purchase system is that the game does link to real-world money which is a real gripe for me. Sure, you could grind your way through but this targets a money making aspect, opposed to a one-off gaming purchase. 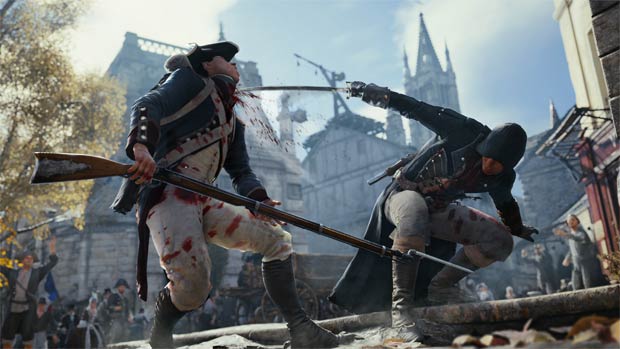 With that said, there are quite a few ways to kill your enemies in the game which once again feel more fluid and flawless than the previous titles. Assassination missions are of course the highlight of the game that when linked to your “assassin” abilities, it creates a great sense of adventure and tension, especially when you finally unleash your deadly blade for that one hit kill. Missions are still as varied as the previous games that include escorting, sabotage and retrieving a variety of items and goodies hidden away through this virtual world of Paris.

Matched with your trusty eagle-vision, this allows you to scan the environment for clues and people in order to proceed with the main storyline. As you hack and main your victims which is quite gory in Unity, Arno must also use stealth that when linked to your eagle-vision, it allows you to maximise the environment and find any weaknesses. The cover system of the game has improved since Black Flag, although enemies still have a knack of finding the player even when you know 100% that in reality, your move would have fooled them. 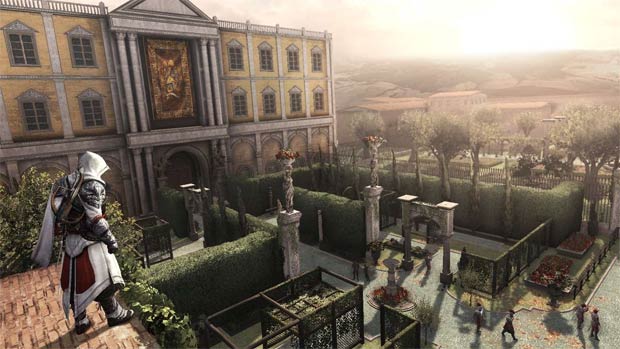 Add in online play which allows you to join up to four players really and it creates a sense of “unity” within the game, especially those co-operative missions that are littered through the game. Nothing is more entertaining than a collaborative assassination attempt which is ingenious but best of all, you can customise your own assassins. This means that you can tailor your own character for particular skills that when matches with your friends (who of course do the same), creates this awesome posse of assassins.

Graphically, Assassin’s Creed Unity is a beautiful looking game on the PlayStation 4 that has successfully recreated the streets of Paris during the height of the French Revolution. The attention to detail is quite insane as is the realistic animation of all the characters that you encounter. The developers have also done a great job at highlighting the differences between the various areas of Paris from the slums to the majestic Notre Dame which looks quite spectacular. It should also be added that the gaming world is huge and according to the developers, the area is considerably larger than Black Flag, not to mention that the gaming engine has the capacity to simultaneously display up to 10,000 non-player characters at once. 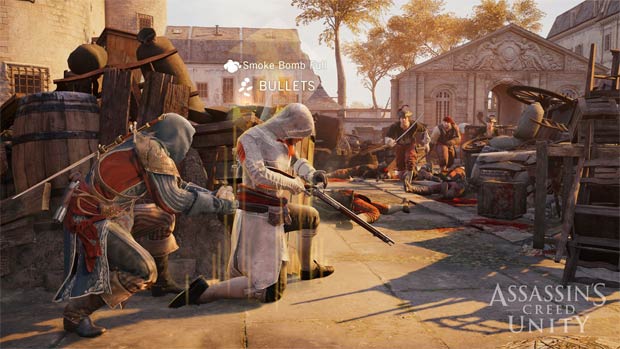 Needless to say, Paris is truly a living  breathing city in Assassin’s Creed Unity and on launch the game did suffer from a variety of graphical issues such as frame rate issues but thankfully a lot of these have been addressed on the PlayStation 4.  Audio is another highlight of the game that boasts some professional voice acting, especially from the main character and a very majestic soundtrack that enhances the overall gaming experience. All in all, the gameplay, graphics and audio creates a decent Assassin’s Creed experience.

Although Assassin’s Creed Unity doesn’t reach the same heights of last year’s Black Flag, it definitely screams next-gen, however it is plagued by some graphical bugs and occasional slowdowns. Thankfully this doesn’t hamper the gameplay experience too much. Even so, I love how big the world of Unity is and that that the developers used the French Revolution as a backdrop which works perfectly with an Assassin’s Creed game. Add some great customisation options and fun multi-player co-ops and the Assassin’s Creed franchise is definitely looking bright, especially with the Unity engine.

A Ruthless new hero for a brutal world: Play as Arno, an entirely new breed of Assassin, more lethal than his ancestors. Take down your prey with a range of new weapons such as the Phantom Blade, a Hidden Blade with crossbow capabilities.

Customisation mechanics: Craft your own unique play style by choosing your weapons, gear, outfit and specialised skills. Mix and match from hundreds of possible combinations and build your Stealth, Fighting, and Navigation abilities from a new expansive skill tree. Become the ultimate Master Assassin.

Discover Revolutionary Paris: Carve your way through a stunning full scale, open-world city, a feat only possible through the power of the new Anvil engine. Explore detailed building interiors and discover secret underground catacombs and sewers. Embark on Ancestral Missions, Treasure Hunts, Murder Mysteries, Contracts and more. Witness the chaos of the French Revolution first-hand by immersing yourself in realistic, systematic crowds of up to 5,000 AI driven characters.

Brand-new parkour, combat, and stealth gameplay: Enjoy an unprecedented degree of freedom and control over your Assassin, brought to life by the new Anvil engine.

A Unique Co-op Experience: Join three friends and experience the online open world of 18th century Paris. Pull off ambitious heists and take part in unique narrative driven missions designed exclusively for cooperative play. Sabotage an execution. Protect an emperor. Assassinate a Templar agent. But victory won’t be easy; you and your lethal band must rely on communication, coordination, and diverse skills to accomplish your mission, then vanish into the shadows.