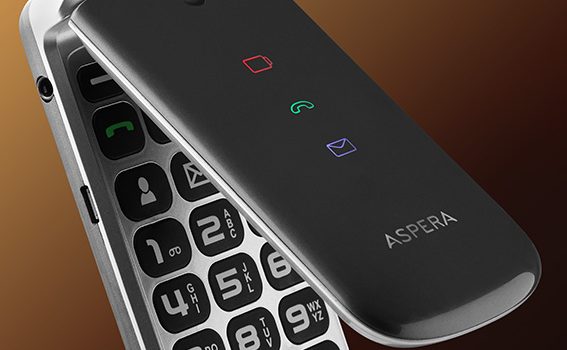 Aspera Mobile has launched the new 4G F40 ‘Easy’ flip phone, the latest evolution of the company’s feature phones, targeted at people who want a simple and easy to use, fully-functioned 4G phone.

Aspera Mobile MD Allan Robertson explained, “With so many customers asking us about potential 3G network closures, and the cost of 4G chipsets coming down, the time was right to launch an affordable 4G flip phone, and so the F40 was born. The feedback from our customers was that they essentially wanted to retain the experience they were getting on our previous 3G F24 and F28 phones, but also wanted access to some new features and capability that comes with Android and of course operating on 4G.”

Robertson and the Aspera R&D team set about defining their customers’ requirements for the F40 which included customising the Android OS to be operated solely from the physical keypad rather than a confusing hybrid keypad-touchscreen experience, retaining the popular SOS button on the phone’s back casing, maintaining Aspera’s trademark ease of use, introducing WiFi hotspot functionality, improving Bluetooth functionality and improving the camera experience.

Robertson added, “The F40 means WiFi hotspot is available for the first time on our ‘Easy’ phones. Also with the new phone Bluetooth has been updated for improved compatibility with more vehicles and other devices, there’s a higher resolution 5MP camera and higher call quality with VoLTE.”

The customisation of the Android OS in order that it can be operated without a touchscreen is one of the major advantages of the F40 as it overcomes the resistance Easy phone users have to using a touchscreen. At the same time it introduces them to a range of Android smart functionality.

Roberston added, “The F40 provides users with an easy adoption of 4G smart technology and the experience is very similar to the 3G Easy models but with an improved camera for picture messaging with family and friends. The significant increase in battery size caters for increased power usage on 4G and programmable speed dial settings, including an SOS button for emergency calling, make operating the phone simple, safe and effective.”

The F40 has a broad appeal and was designed with the typical Aspera ‘Easy’ Mobile customer who enjoyed their experience with the previous F24 and F28 phones in mind.

Robertson explained, “Many ‘Easy’ users do not want to use a smartphone with a touchscreen. The F40 is also ideal for anyone who doesn’t want to carry a smartphone at all times, but still needs to make and receive calls and messages.

With WiFi hotspot the F40 now also can be used as a 4G modem, allowing sharing of the 4G data connection to a computer or tablet, even with multiple users. We tested this by running our entire office internet over the F40 and achieved very acceptable and usable data speeds. It really is an amazing function in a $99 Easy phone.”

There are a lot of features and a lot of value in an unlocked, 4G, slightly retro F40 phone that isn’t only just available in plain black.

Allan Roberston concluded, “The F40, from its features and price to the Titanium colour is a great example of how we can customise a device to the specifications  our customers and the market are asking us for. F40 buyers know they are getting a well thought out, well-designed 4G flip phone that comes with local Australian customer service for just $99.”

The new 4G F40 flip phone is available now and can be purchased for just $99 at Big W, Harvey Norman, BP, Retravision and MobileCiti.

For more information on the new 4G F40 go to: https://asperamobile.com/phones/easy-phones/aspera-f40/