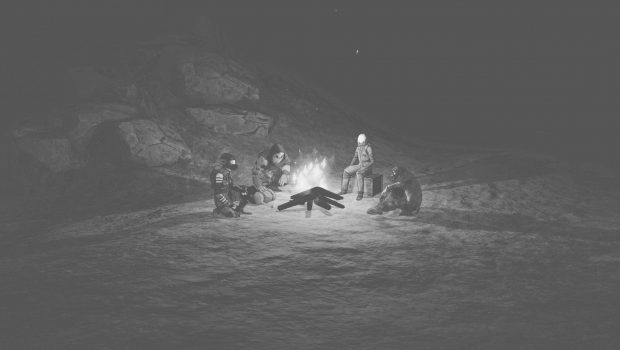 Summary: Ashwalkers is nothing but a seedling of an idea that is struggling to grow in the fields of ash that surround it.

Apocalyptic survival game with moral choices, that sounds like a video game right there. We’ve seen games like Overland blend turn-based tactical combat and survival mechanics, but Ashwalkers is aiming to do something a little different. Taking a leaf out of Inkle’s book, Ashwalkers is creating a text-focused branching narrative pathway through the ash-laden wastelands of a world post volcanic catastrophe. Unfortunately it fails to deliver on its promises, and is an utter chore to move through.

Ashwalkers is the debut release from Nameless XIII, a French indie studio headed up by Life Is Strange co-creator Herve Bonin. That carries some pedigree; Life is Stange is considered by many to be a shining example of what narrative choice in video games can be. Unfortunately their inexperience as a studio shows, because Ashwalkers is devoid of any true moments of humanity, just like the barren wasteland you will be trudging through for the next two hours.

After a massive calamity that saw immense volcanic activity, the world was covered with ash, and society began to crumble. You are in control of The Squad, a group of four protagonists who have been sent off from their home, The Citadel. Failing to provide safe shelter for their 200,000 inhabitants, our squad is on a journey to The Dome of Domes, a mythical evergreen base that can support the entire congregation, and harbors the promise of prosperity. The setup is actually pretty intriguing. Typically when we think of the apocalypse, we are given a zombie outbreak scenario, perhaps an ice-age, but to be thrust into a world that is grey and full of ash is a unique take that I haven’t seen before.

And that’s about where my praise ends, because Ashwalkers is nothing but a seedling of an idea that is struggling to grow in the fields of ash that surround it.

The entire gameplay can be broken down into three core loops. There’s the exploration loop, where you click across a rather empty landscape, directing your characters along a pathway towards glowing resources to be gathered. You party has a number of meters attached to them, such as health, energy, heat, hunger, and morale. As you trudge along these mostly barren locations, those meters will begin to fall, which will force you to camp out and recuperate.

The camping loop is where the the main focus is. Here you will spend resources such as wood, food, and medicine in order to satisfy the needs of your four adventurers. Then you will schedule their time, either letting them sleep, have someone stand guard, send someone off to forage for supplies while the others are resting, or engage in conversation. There’s actually some neat ideas here, and I really love the idea of setting up certain squad members to have a chat, to learn more about heir backstories. 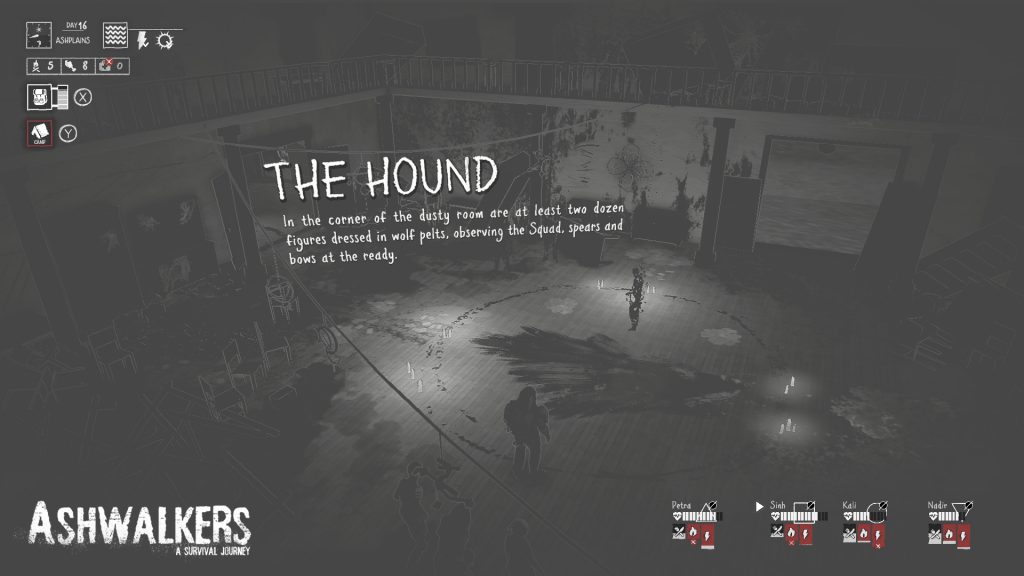 Or I should say, I would enjoy that. The writing in Ashwalkers is less than mediocre. None of the dialogue between characters feels natural, or worthwhile. There’s no deep emotional dives, or learning a huge amount about the the calamitous events that caused us to be in this mess. It all just feels a little soulless. Considering that narrative is supposed to be the selling point here, I can’t help but feel disappointed.

The final loop is the events loop. As you are walking through the world you will uncover certain events that will offer up choices that affect your overall outcome. Some of these are as simple as choosing to diplomatically speak to another group of survivors, or instead attempt to sneak into their camp undetected. Others will have you choosing to help someone out, or perhaps leave them to die so you can sneak by and stay the path. Once again, these branching paths filled with moral dilemmas rarely felt impactful at all, most of the time boiling down to a question of whether you wanted to be compassionate, or self-serving.

And some of these events are just plain bad. There’s a scenario where my party triggered a trap when investigating a strange structure during our run. Once inside we were “met” with a gang of nomads, which led to a situation that had us fighting their leader in order to prove our worth, and get safe passage. The problem is that while this scenario plays out, the squad is standing in an empty room, with no action playing out, just the words playing out on the screen.

There were many scenarios like this. For instance where my party found a shelter and decided to camp there for the night. At least, that’s what the text was saying. My characters were standing in an empty field the entire time. Another time, rain came and soaked my crew to the bone, causing their heat levels to drop. However they were still sitting there, roaring fire by their side.

This left me questioning the overall design of Ashwalkers as a whole. Why create these sparse, boring, slow moving environments if they aren’t really adding to the experience, nor representing my actions as I’m making my way towards the end goal? I’d much rather an 80 Days style game, where my party are moving along and then events pop up, the camp management loop happens, and it’s snappy and impactful. The emptiness just feels unfinished, like this is a proof of concept pitch, not a released title.

There were other issues I had along the way. Given that a single run of Ashwalkers is approximately two hours, the fact that events and dialogue were repeating already was really disappointing. I never really felt threatened, only needing to use medkits a handful of times, which took away from the urgency of it all. 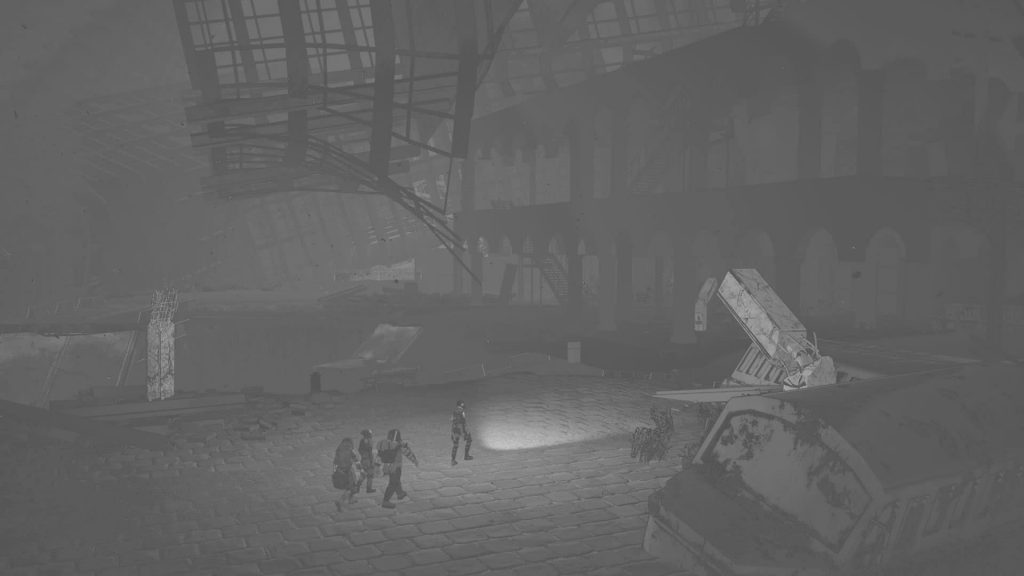 With no real affinity for my squad, and no real connection to the story, I decided to let one of my crew members perish when we were attacked by a threat. I thought it would inject some much needed drama, and hopefully deliver some kind of memorable moment.

It delivered a memory, that’s for sure. Because approximately ten minutes later at a critical moment of the story, my dead comrade was delivering dialogue, despite no longer being in this mortal plain. As if dealing with a volcanic apo clypse wasn’t enough, now I have to deal with ghosts too.

Eventually I made it to the end of my journey. I made a choice for the ending. It gave me a summary screen, and it filled out some of the in-game encylopedia. To think that there are another 33 possible endings to this, and my first run was this empty, I struggle to imagine what else is out there for me to discover.

I’m not in the business of slamming indie games. In my mind, smaller projects take bigger swings, and the ones that try to do interesting things sometimes end up failing, and that’s okay. But Ashwalkers is a true disappointment, failing to deliver on its main focus – a compelling narrative filled with moral choices. Given the pedigree of Bonin and his new studio, I can see a lot of people jumping head first into this game, and I totally get that. The trailers look striking, and the promise is strong. I was excited, I even included it in my Top 10 New Indies video last month. But now that it’s here, I can’t help feeling that Ashwalkers does nothing to push the boundaries of its genre, looking like a fumble at the starting line rather than a strong debut release.

Devoid of personality. Lacking meaning. Missing purpose. Ashwalkers is a game I cannot recommend to anyone, even the most die hard of narrative fans.