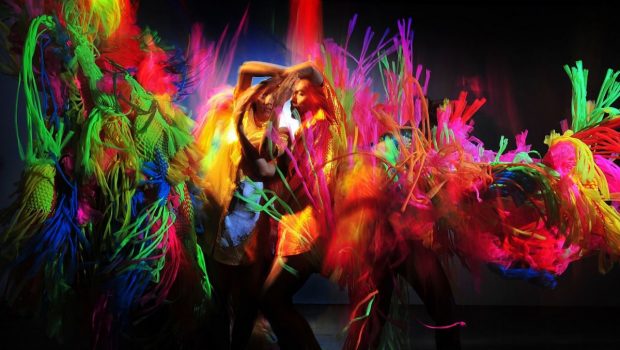 Inspired by Phi Ta Khon, a traditional Thai folk festival where locals don colourful masks and vibrant costumes to honour fertility and death, Klunchun has created a new physical vocabulary marrying the improvisational and intuitive nature of folk expression with his staple contemporary choreographic system based on classical Thai dance.

Dancing with Death presents mortality as something to be celebrated, rather than feared, and dance is free, fluid and organic. Seven dancers, including Klunchun, navigate cyclical paths in a lyrical meditation, negotiating the layers of human desire, fear, joy and spirituality.

Dancing with Death is an Arts Centre Melbourne commission in collaboration with Tokyo Performing Arts Meeting (TPAM) and The Esplanade (Singapore). This project was supported by the Australia-ASEAN Council.

“Dancing with Death is situated in the spiritual everyday. It boasts liminal figures: gods and the godlike…When the dancers come together they exert a palpable force, the force of common humanity” – RealTime Arts, Australia