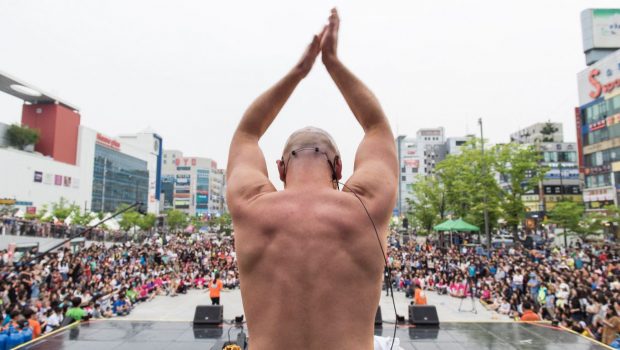 MELBOURNE, TUESDAY 28 FEBRUARY 2017 – Victorians are invited to join Fun Run, a riotous celebration of endurance at Arts Centre Melbourne on Sunday 12 March from 4:30pm. Over five hours, crowds will cheer on Melbourne artist Tristan Meecham as he runs a grueling 42km marathon on a treadmill. An eye-popping display of visual effects, along with a sizzling soundtrack and hundreds of performers and athletes drawn from the local community will join in the celebration of Tristan’s remarkable display of endurance.

Multiple award winning comedian, performer and writer Eddie Perfect will EMCEE the event, which pays joyous homage to the Greek messenger Pheidippides who was sent to Athens to announce the Persian’s defeat in the battle of Marathon, running the entire distance without stopping. The free interactive spectacle for the whole family has it all… shiny lycra, gleaming muscles, bouncing pom poms and an epic Fun Run Flash Mob that bursts to life on the hour, each hour that everyone can participate in.

Turning ordinary moves into extraordinary heart-pumping action, Fun Run is Arts Centre Melbourne’s fourth project in the Betty Amsden Participation Program and the work of acclaimed Melbourne based performance company All The Queens Men. The event will take place less than a fortnight after the death of Miss Betty Amsden AO, DSJ, who died peacefully at her home on Sunday 26 February.

To make it across the finish line, Meecham will draw energy from the hundreds of athletes, martial arts experts, aerobic trampolinists, dancers from Indigenous Hip Hop Projects & Outer Urban Projects, cheerleaders, traditional Chinese drummers, cyclists and many more – all of whom will perform on stage.

The general public can get involved by joining the Fun Run Flash Mob on the day as well as taking part in free rehearsals during March. Everyone is invited to join the free public workshops or they can practice at home with a free online instructional video.

Speaking about the monumental community event, Arts Centre Melbourne’s Creative Producer of Participation Patrick Cronin said: “Fun Run brings together artists, communities and the public in an outdoor extravaganza where sport meets art meets dance party. We invite everyone to join in this extraordinary celebration of the every-person and our boundless creativity.”

Circus Oz artistic director Rob Tannion said the Circus Oz team will “work in schools to empower kids who are facing more challenging circumstances and invite them to fall in love with and share the benefits that both circus and the arts can offer.”

The Betty Amsden Participation Program is a four year large-scale community engagement and public participation program that celebrates the creativity in all of us. It is made possible by the vision and exceptional generosity of the late Miss Betty Amsden AO, DSJ.

In 2015, 7,000 little wooden houses, all individually decorated by people from across Victoria to represent our feelings of home, filled Melbourne’s streets, parks, city spots and social media for Home.

In 2016, in an Australian first the Dominoes project saw a 2km chain of more than 7,000 breezeblocks snaking through the city to bring Melbourne to a stand-still for one day.

In 2017, Fun Run will be the first large scale participatory event to get hips shaking and bodies moving.

By All The Queens Men

In association with Circus Oz

All The Queens Men create spectacular and participatory art experiences. Led by artists Tristan Meecham and Bec Reid, All The Queen Men collaborate with diverse communities in the making and performing of our inclusive works. For more information visit allthequeensmen.net