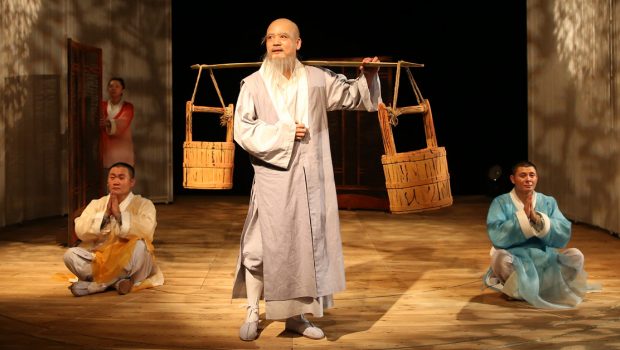 China National Theatre for Children will present Three Monks at Arts Centre Melbourne, Fairfax Studio for two performances only on Saturday 2 September 2017.   Adapted from an ancient Chinese legend, this beautiful, wordless production integrates traditional Chinese opera, martial arts and classic elements of Chinese culture in an exploration of philosophy of unity, cooperation and the harmony between man and nature.

On top of the mountain, in a small temple, live an old monk master and his three students. They live together in peace, but things haven’t always been so easy.  As each of the monks reflect on how they came together, they will take the audience on a heart-warming journey of laughter, anger and everything in between.

Arts Centre Melbourne collaborated with China National Theatre for Children (CNTC) in 2008 and 2009 which resulted in the presentation of The Dragon Child in the Playhouse in October 2009. In August 2016, Arts Centre Melbourne Chief Executive Officer Claire Spencer and members of the programming team were invited and attended the Beijing Children’s Festival which is presented by the China National Theatre for Children.

China National Theatre for Children says of the production and the upcoming Melbourne season, “We created this show in 2014 and since then it has travelled to 14 countries and been warmly received by audiences. This show presents the spirit of Chinese traditional culture and emphasises to children the meaning and importance of cooperation- a universal theme that has resonated around the world. This will be the first time the show has been presented in Australia and we are thrilled to be bringing this production to Arts Centre Melbourne”

Three Monks will be presented at Arts Centre Melbourne as part of the Families and Arts Learning programs. Arts Centre Melbourne’s year-round Families Program was launched in August 2009 and has grown in reputation to become a highly respected program both in Melbourne and nationally. Featuring free events, intimate and large-scale theatre from some of the world’s most respected companies and a diverse range of interactive workshops, the program is robust and growing in size, scale and scope.

Guaranteed to take young people and their families on a journey that will stretch their imagination, this is an incredible performance opportunity not to be missed.

This program is supported by the Department of Foreign Affairs and Trade, Australia China Council.