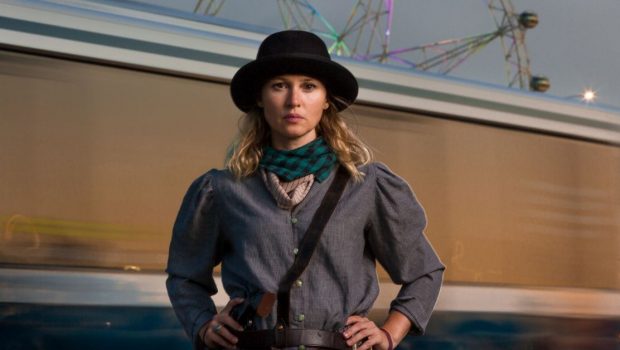 MELBOURNE, FRIDAY 24 FEBRUARY 2017 – Arts Centre Melbourne (ACM) and Footscray Community Arts Centre (FCAC) present Passenger, a new theatre experience from 23 – 26 March. Audiences are taken aboard a moving suburban bus on a narrative-based journey that departs from and returns to the same location. This is theatre on the move.

As audiences gaze at the passing world outside the windows of the bus, they overhear a conversation between two fellow passengers through on board speakers. An original filmic soundtrack subtly seduces passengers into an alternate understanding of what they see outside and Docklands becomes a hostile frontier landscape.

Referencing Western films where cowboys respond to a lawless world by taking the law into their own hands, Passenger explores contemporary ideas of what is ‘right’ and ‘wrong’, and what happens when people decide to hold others accountable for their actions.

On board the bus, a mysterious female character entices a male passenger to divulge the unethical actions of his corporate employer. The layering of conversation and dramatic score against a shifting backdrop of the real world creates an intriguing theatrical experience. Audiences are left feeling acutely aware of the modern-day Western unfolding before them.

“We wanted to create an experience of theatre that is moving and set in a real landscape – something that feels like being inside the drama rather than watching it from the outside. We put the audience on a bus. They are still passive, like in a cinema or theatre, but the overall sensation is much more awakening and exciting.”

Passenger is a production by Jessica Wilson created with fellow artists, Ian Pidd and Nicola Gunn.

“The vehicle becomes a bubble, the dashboard a console, and the landscape all around unfolds as a television screen.” – Jean Baudrillard, The Ecstasy of Communication.

This project was co-commissioned by Arts Centre Melbourne and presented in partnership with FCAC as part of WOW – Women of the World Festival Melbourne.
The project is supported by the City of Melbourne annual Arts Grants Program.

It has been assisted by the Australian Government through the Australia Council, its arts funding and advisory body.