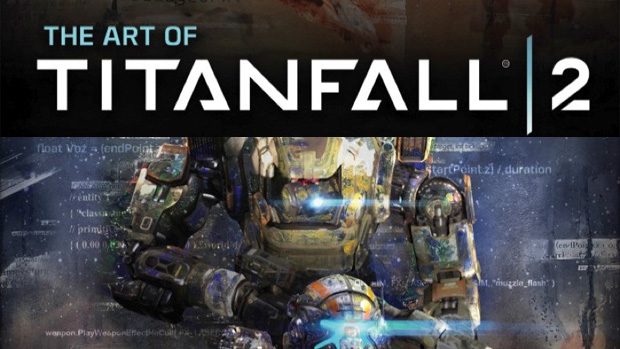 The Art of Titanfall 2 Review

Summary: The Art of Titanfall 2 is a beautiful look at the behind the scenes of this blockbuster game!

The original game Titanfall had some mixed reviews, however in the sequel, the developers have listened to the complaints and the sequel is far superior in terms of both gameplay and graphics. Our review for Titanfall 2 can be found here and as you can see, even the reviewer didn’t know what to expect but thankfully was pleasantly surprised. Although the first game focused on online multiplayer, the sequel actually has a decent story behind it was you’re transformed into a Militia rifleman named Jack Cooper who is forced to become a Titan pilot in order complete a dangerous mission. Of course, the multiplayer component of Titanfall 2 is the main focus but it’s great that the developers have added a little extra to this franchise. It should also be noted that the mastermind behind The Art of Titanfall 2 is Andy McVittie who has worked in the video game industry for over 20 years and was responsible for the excellent The Art of the Rise of the Tomb Raider which is another spectacular book. 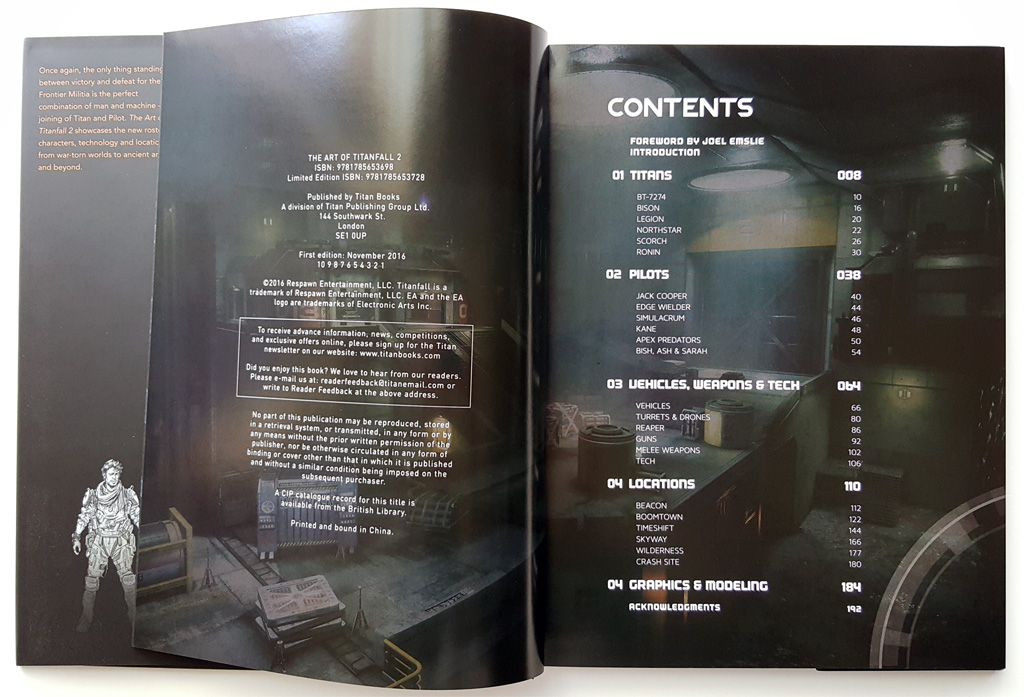 However this book, The Art of Titanfall 2 captures the marvel, beauty and development of this virtual world with some stunning imagery and snippets of information. At almost 200 pages, this book is bristling with content and is neatly divided into four interesting and visually impressive sections. This includes Titans, Pilots, Vehicles/Weapons/Tech, Locations and finally Graphics/Modelling plus an acknowledgement section. But before jumping into the content and amazing pictures, there is a short forward by Art Director Joel Emslie who explains his challenges, passion and how over a two year period, the art was created for this PC, PS4 and XBox One game. Following this, you have an introduction which explains the story of this game and the motivations used in creating this title such as drawing down from the post-American Civil War era, including the Wild West which after finishing the game, I can really see the parallels thanks to this book. 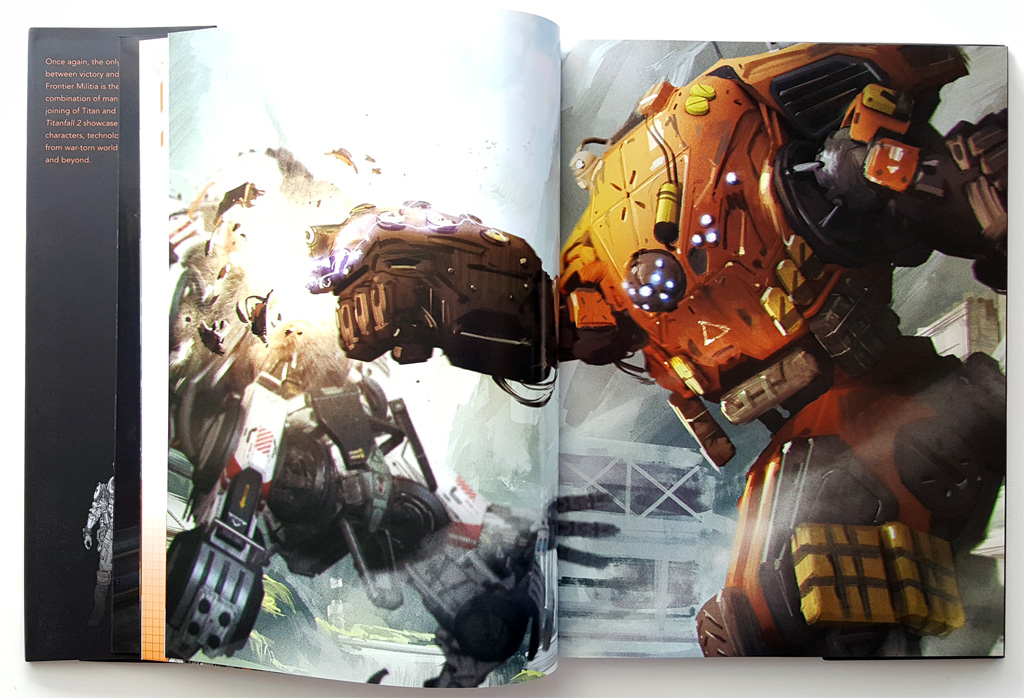 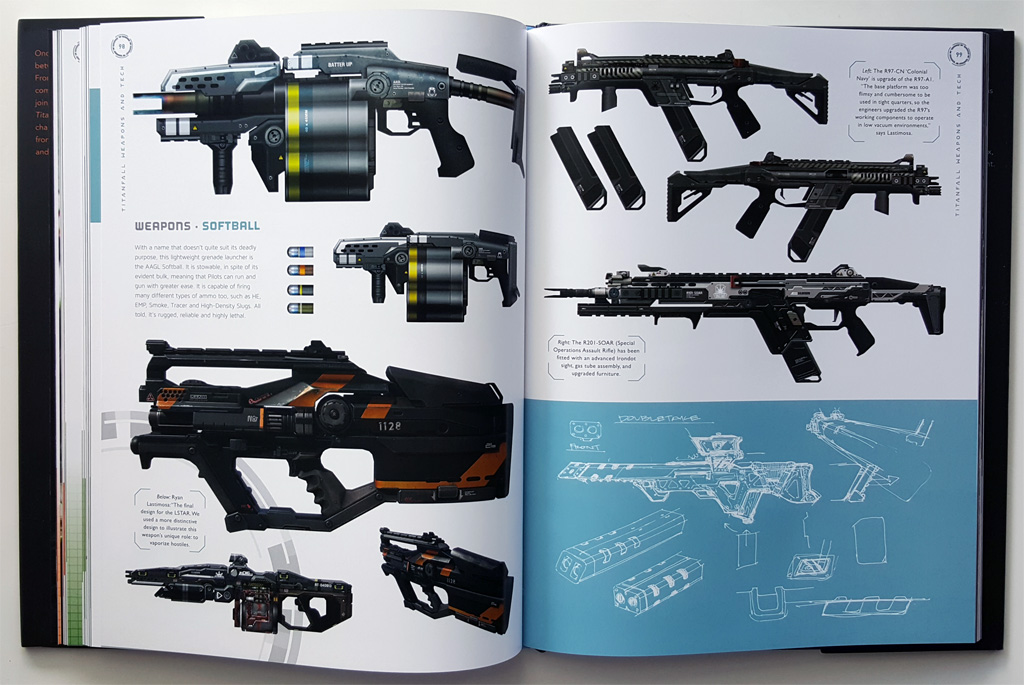 My favourite part of the book was the first section which revolved around the powerful Titans which are mech-like metal giants which are not only quite powerful but really channel that Godzilla spirit. This section includes sketches, coloured renders, concept art and even some gorgeous paintings of the Titans themselves. Another cool element of this book is that there are blurbs about the creations from the people involved in the game which may include some of the challenges or ideas that they implemented into the final look. The pilots section is another insightful section that commences with hero Jack Cooper and I love how they speak about his very cool visor which was quite prominent in the game. They also have the development phase of some of the pilots, including their faces and uniforms plus the dreaded Apex Predators who are the bane for the player. 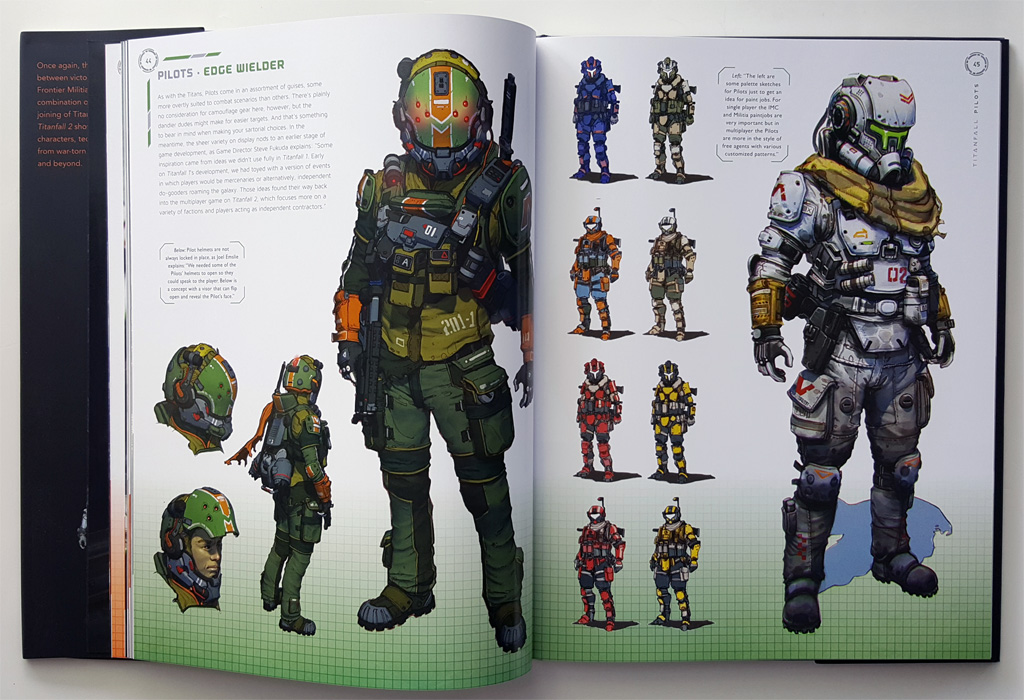 Furthermore, I found the section on vehicles, weapons and tech quite fascinating because it gives another perspective on these items that played an integral part of the game. Given that the majority of illustrations are not only colourful but quite detailed, seeing the initial sketches of some of the more basic tech like drones really highlights the development of the art team. Add in an explanation of what these vehicles and items do and The Art of Titanfall 2 is a great compendium to anyone who owns the game. Locations take the player through the various areas in the game which are visually quite detailed and explain the inspirations behind their appearance and even purpose. The final part of the book is about real-world modelling of some of the characters from the game which helped created the virtual models that are almost the final piece of the puzzle, which is the gaming world. I just wish there was a bit more information on the models and more imagery but nonetheless, it’s still a fascinating insight into the video game Titanfall 2. 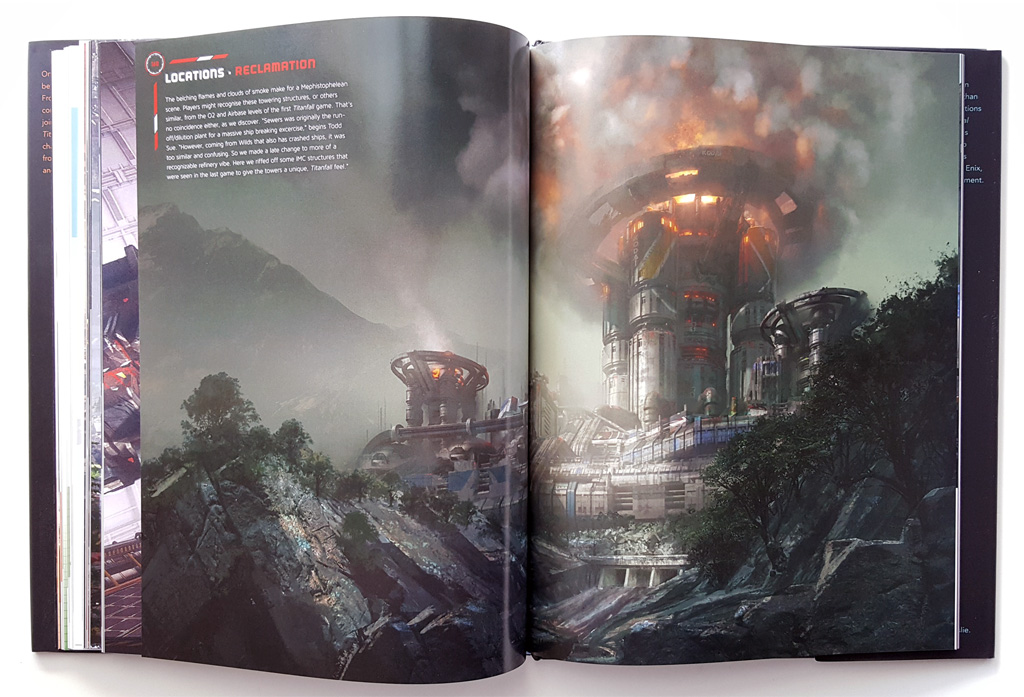 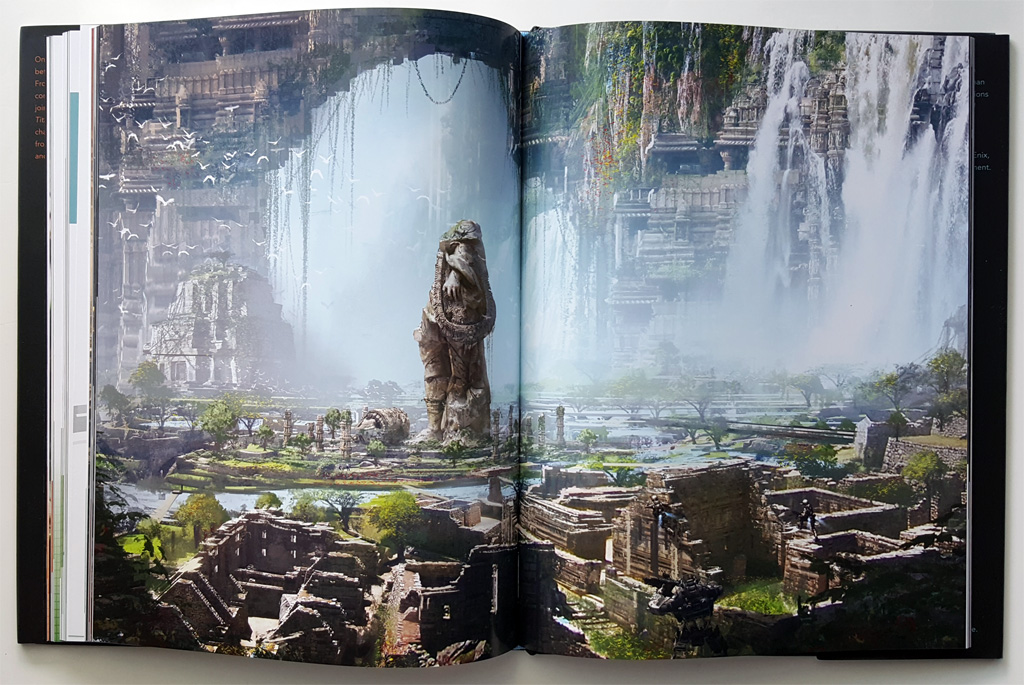 For lovers of the game or even art, The Art of Titanfall 2 is brimming with content that boasts some truly amazing artwork from the development of this game. It’s a great compendium that is filled with interesting information about the characters, weapons, locations and vehicles that graced the game that when matched with the images, creates something very special. 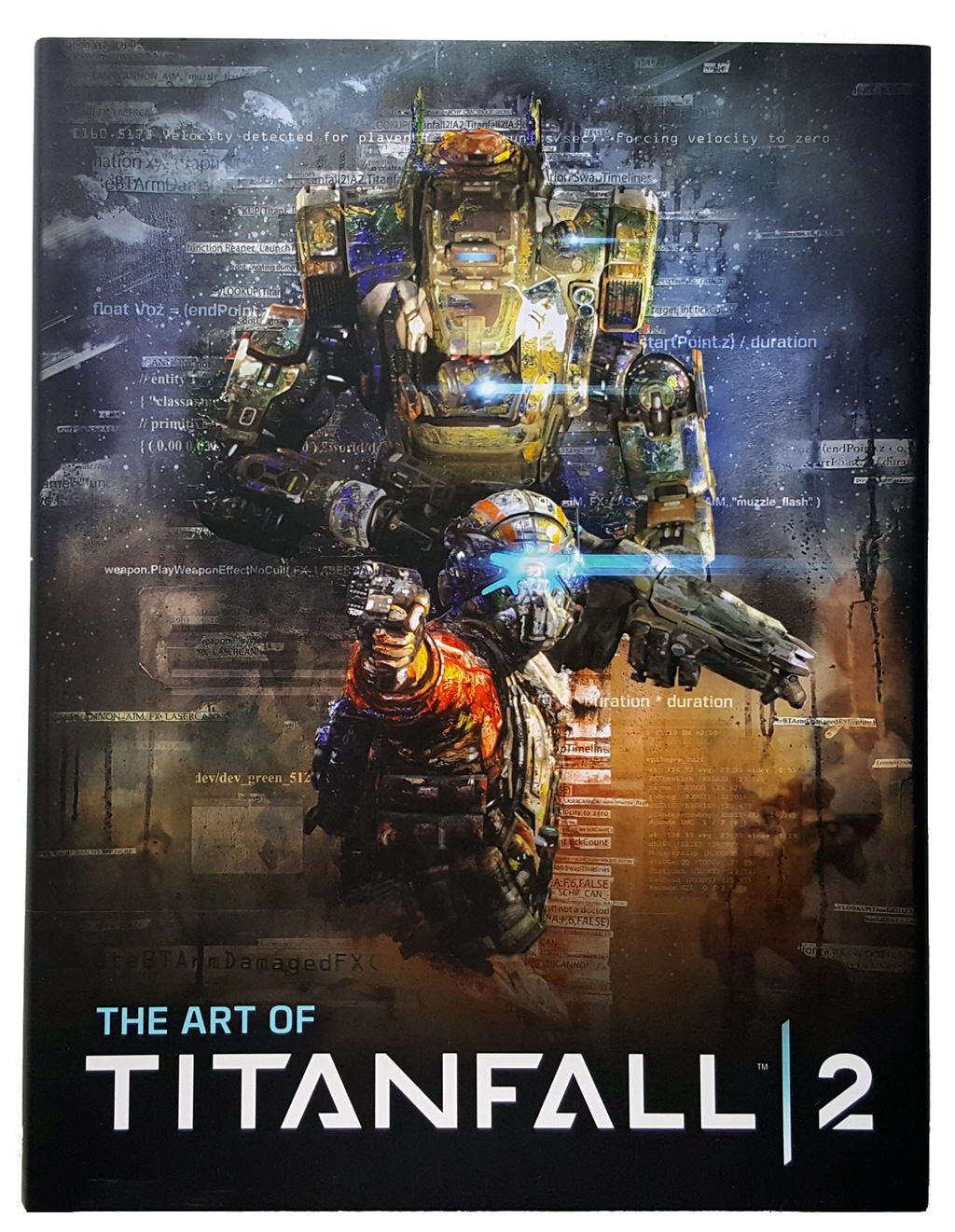