Summary: Archangel brings us a taste of what many have always wanted. Being at the controls of a giant robot!

Archangel gives you that sense of being small in a larger world. It gives you access to that secret fantasy of being the pilot of a giant robot that towers over everything and can dish out the punishment to the enemy. Archangel is also in the first wave of games for VR and among the hits and misses in the VR gaming world, in it may not be a mega hit, though it is a blast to play.

Archangel does not give the player full autonomy of the giant robot. It is a game set on rails as the saying goes. Therefore, it takes you to an area; you fight off and or defend against enemies and move on. The actors do their part to bring this world to life. With varying degrees of success, you do feel the emotional gut punch they give your character when the base is attacked. Anger and revenge are always some of the great universal motivators. The designers/writers did well to throw it at the players. You feel vested, more so than other games I have played. It is an emotional card to the Psyche that could have went badly. Not here. Well played. Well played indeed. 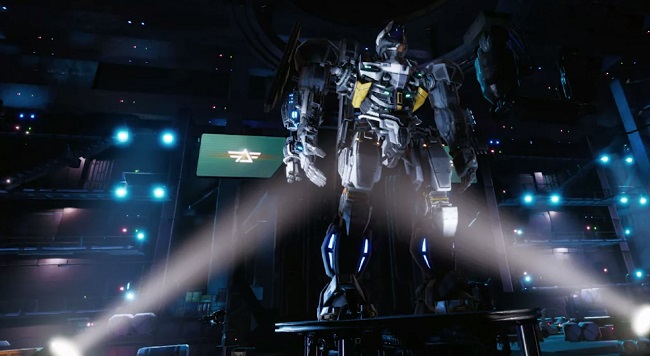 If you come to Archangel expecting a lot of free roam combat, you’re out of luck. If you come into it knowing that, it is a straight up arcade shooter wrapped in the awesomeness of Virtual Reality, well then you’re spot on.

Let us talk a bit about the design and premise of the game shall we? It is the year 2089. It seems there has been war going on against HUMNX. Your character is introduced to a test facility and a very impressive secret weapon. A giant robot, the Archangel… with different weapons and defensive systems sits in the massive hanger. It is truly awe inspiring in virtual reality as your character rides the infrastructure up to the cockpit of this robot.

After a few tests and you as the player get used to the weapon and defense systems, all hell breaks loose. Which by the way the Oculus touch controls are spectacular in this game. The utilization feels so natural. You feel like you are in control of this massive robot’s arms and systems. 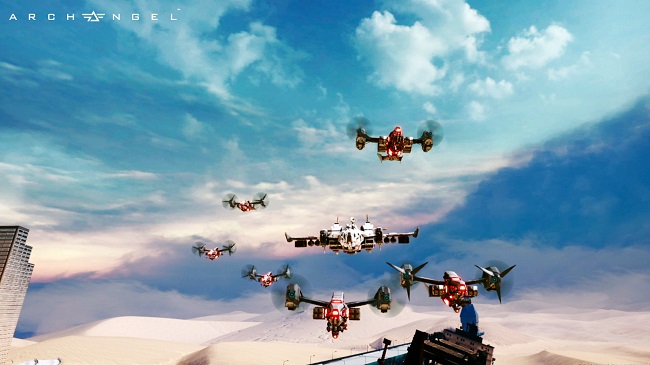 It seems a traitor has revealed the secret development facility for Project Deliverance, resulting in a surprise attack from HUMNX.

Thrust into the action and unable to save people in the hanger or the observation deck, the player is forced to launch Archangel before it is fully ready. Linked up to the systems through a neural link the pilot is forced to make a run for it. Destroying as many as the enemy as is thrown at them and this Archangel prototype is the platform to dish out the destruction.

Thankfully, Archangel does not hand the victories to you on a silver platter. Oh no, throughout the game the enemy sends more high tech machines after you. Not only on the ground, but waves of flying enemy as well. There is an upgrade system in the game, so as the player advances, more upgrades become available. The hard part is making the choice. Choosing the wrong one can make some of the coming battles that much harder or even end in a crushing defeat. 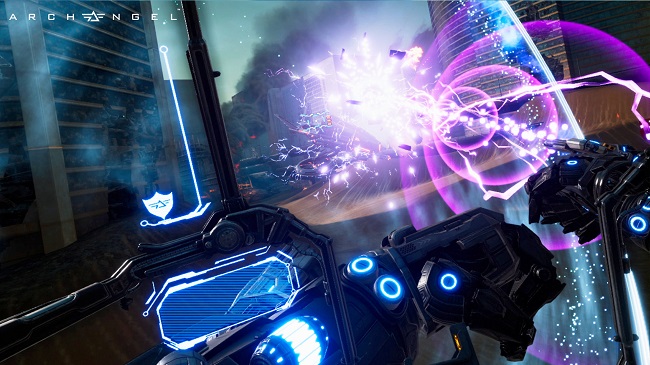 Given that, Archangel as a VR arcade game has some mild punch to it. It does not claim to be anything more than it is. Thankfully, what it does… it does well. There are times in the game that it makes you feel big and powerful, in control of this massive machine.

The designers clearly had use of hand controls in mind when they worked on the development and design of Archangel. During game play, players shoot at enemy targets by manipulating the aiming and arms with the controllers. The hand controls initialize the defensive systems. The defensive systems consist of two circular energy shields, one on each arm. These energy shields have limited power and can overlap one another for better coverage.

There are times when your energy is low, some other friendly ships will shoot supplies towards the player, and the player must grab these supplies in midair.

Players also get to let out some aggression by punching objects with the Archangel’s massive fists. I found it a bit of a letdown that punching things was not used more in the game. That feeling of letting lose with a giant haymaker is awesome. 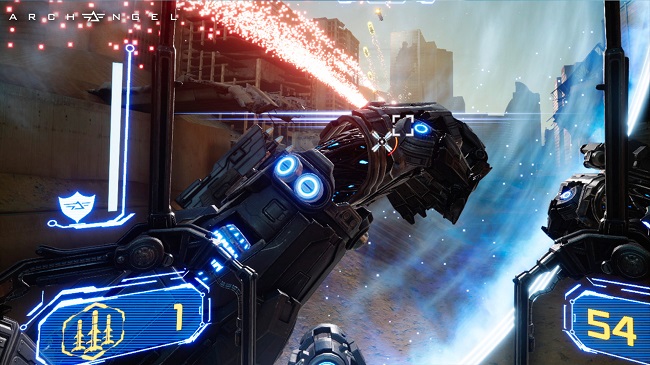 The gameplay is weak at times and feels a bit of a slog, however the level designs do throw different things at you to try to keep it interesting though.

The story, while a basic affair keeps things interesting enough to make sure it does not get to boring on you. Voice acting is not to over the top, nor is it out to win awards. However, most of the actors are really being in the moment, delivering those lines, and bringing the character to life. 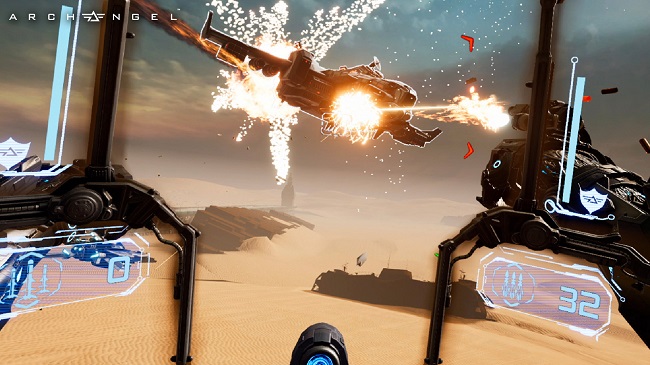 Graphically the game looks OK, the world around is not all that detailed. Buildings especially are not very good looking. However, it all gets the job done in relaying that you are playing in a desolated, war-ravaged world.

While we are still in the infancy of Virtual Reality Gaming, Archangel brings something to the table worth checking out. Giant Robot seated game play making you feel like you are at the controls of the Archangel. Awesome mindless on rails entertainment… that is Archangel, the kind of game you can sit back and just enjoy.