Summary: Climb into your Mech and take on the overwhelming forces in your path.

So… there’s a big limitation in my review here… I wasn’t able to join any muliplayer games. That’s not for want of trying, in fact my first experience trying to jump into the game claims I spent two hours in it… so I guess I was more patient trying to find a game than I thought. As a result I’ve only really played the single player campaign, I’ve read about the multiplayer and apparently it is far superior to the single player… so take what I write with that in mind as to how keen you are to try the multiplayer aspect.

The introduction to the solo campaign is quite well done, you can choose your gender and then you will find yourself being transported to the mech facility with your child who is seemingly more excited than you about what you are about to experience. When you arrive on site you get to experience one of those scenes that makes you appreciate VR… standing and looking up at the towering mech you are set to pilot is an impressive moment. Things quickly go pear shaped however and after a quick over view of how to use your mech, you find yourself called into action. 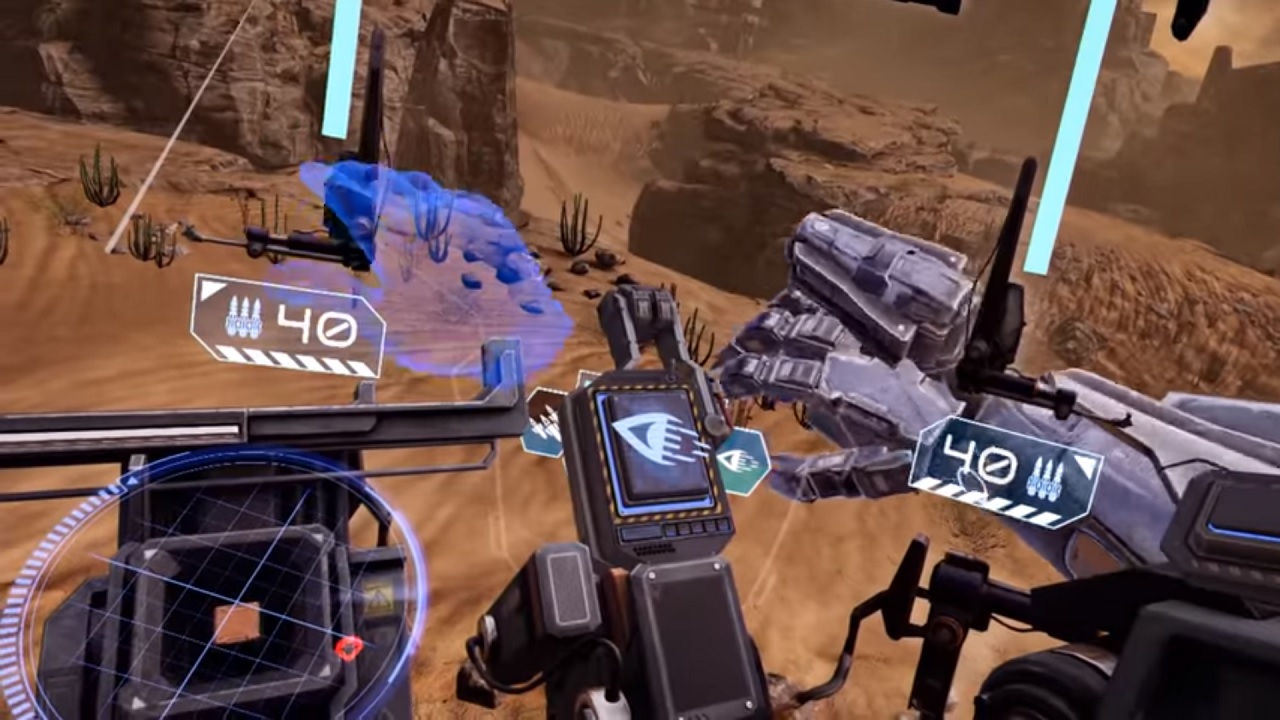 It’s always helpful in a game of seemingly ruthless destruction to have a decent story to back up your actions and Archangel gives you a pretty good reason to be doing what you find yourself engaged in… I won’t go into details (you learn pretty quickly anyway)… but it does give you that sense of justification for your aggressive attitude. Furthering this story throughout the game is the ability to talk to your team mates and HQ… it’s optional (which is a nice touch) but it serves as both a way of indicating that you care for the well being of your team by asking them how they are doing and works as a great way to put in some exposition without seeming to forced. 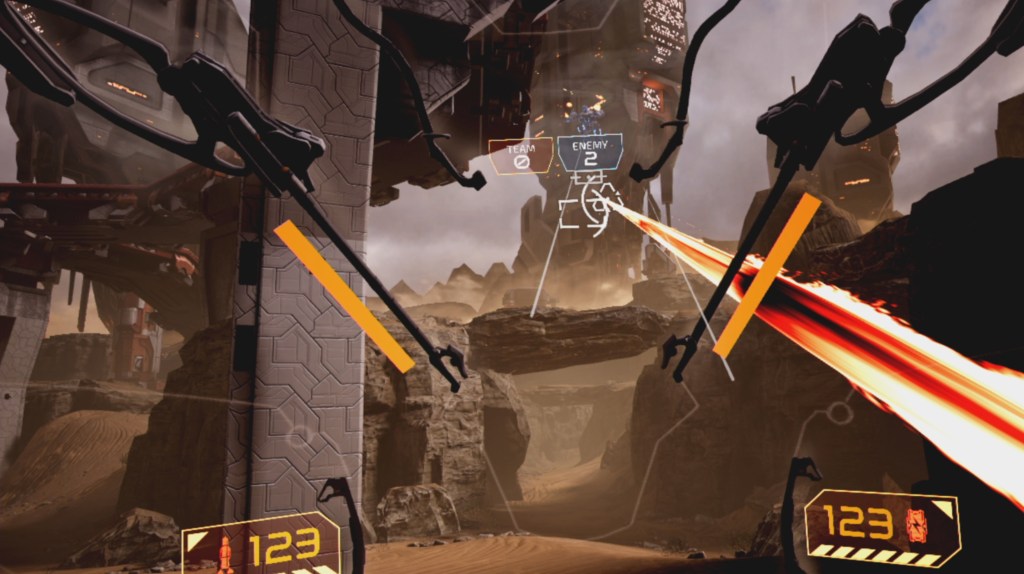 Gameplay is a bit of a mixed bag. The core gameplay is on rails (the muliplayer has free movement) which is fine and arguably works here as it claims it’s taking you along the most efficient route etc. Weapons are relatively straight forward to use, you have your primary weapon (which you can change later in the game) and you have a punch which is great for clearing some obstacles and knocking enemies down). The one issue I had was with the shield… each arm has a shield and a certain amount of charge so it can stay on for a given amount of time then it has to be rested while it recharges. The problem I had was with my left arm shield which would keep blinking out… not a problem with it’s charge but with the button to engage it… it is probably very important to note here that issues with parts of the controller failing are well known and it could simply be that my controller is starting to get a bit faulty… but it can still be a bit fiddly getting shields up and keeping them engaged. 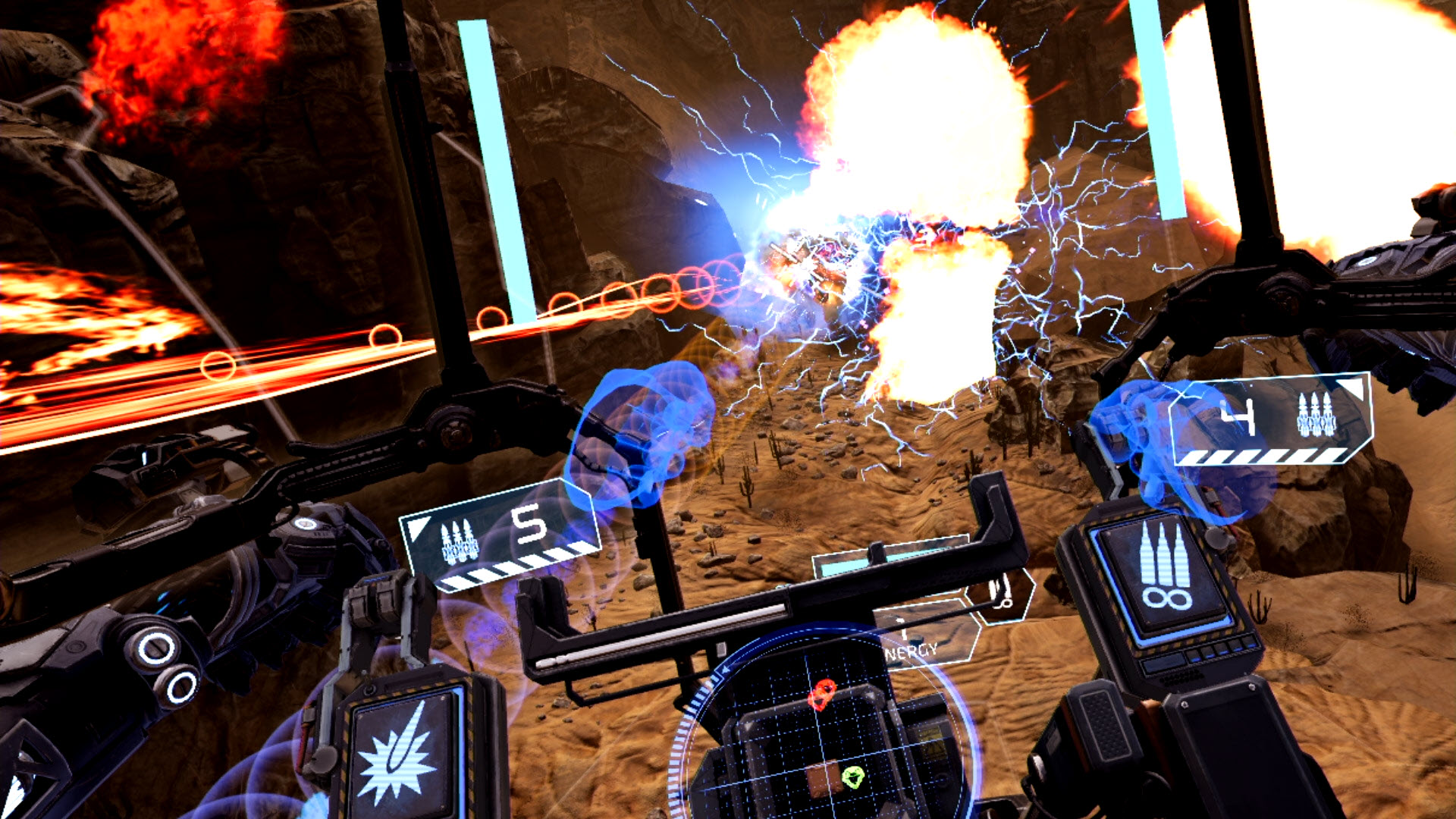 Overall there is a nice sense of scale and mechs are always fun to play in. It sounds like the multiplayer component is a lot of fun but if you are like me, you may find it hard to find a game to join. I’m happy playing single player though so it doesn’t bother me too much (though free movement in a mech would be nice). If you are only really interested in the muliplayer just keep in mind it might be hard to find a match… but if you are keen on the single player then this is certainly a decent option.