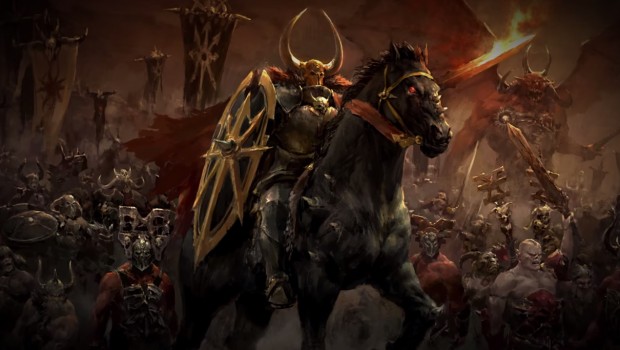 Total War: WARHAMMER – See the Chaos Warriors in battle for the first time!

Watch Emperor Karl Franz and the forces of the Empire join battle with the Chaos Warriors, led by the Archaeon the Everchosen!

This first-look at the Chaos Warriors showcases a range of Chaos units, from core infantry such as Chaos Marauders and Warriors, to higher-tier monstrosities such as the Chaos Giant and the brutal Hellcannon – a foul instrument which transmutes souls into flesh-searing bolts of arcane energy and hurls them into the enemy ranks.

Accompanied with developer commentary, this land battle also showcases spells from the Lore of Light and Lore of Fire as the two armies clash on the frigid plains of Norsca.

Please note that players will be able to replicate battles such as this in Total War: WARHAMMER’s Custom Battle menu, regardless of whether they own the Chaos Warriors Race Pack.