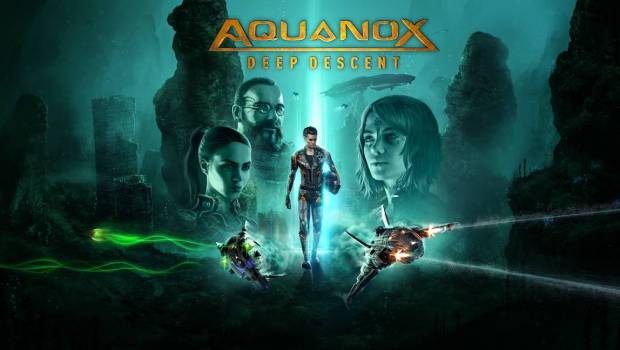 What is Aquanox Deep Descent?

Frozen for thousands of years and awakened from cryo-sleep with amnesia, you and your crew find themselves in a dystopian world where the oceans have claimed the lands and all of humanity now live in divided warring factions beneath the waters.

Led briefly by the man who woke your team up, you blindly follow his instructions to rendezvous with the leader of a big vessel, “it’s all arranged, now go”. Naturally, this man dies saving your life from a warring faction.

With only questions and a basic submersible ship, you meet with a faction leader and in order to regain your memories and find the answers you seek, you have to play fetch, fulfill bounties, make deals and kill enemy vessels and the odd wild animal.

As you progress through the game, there are opportunities to trade credits or resources for better ships, engines and shields upgrades and access additional advanced weaponry. All pretty straight-forward. 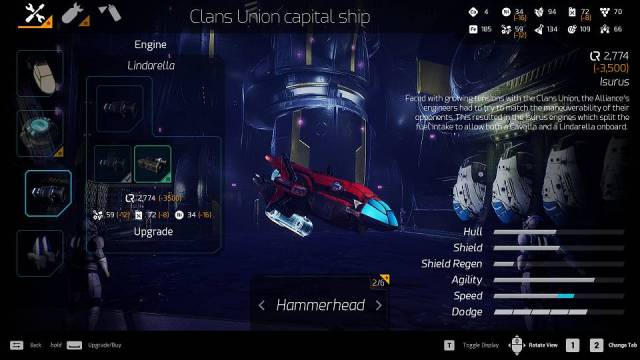 All of this is just so you can find Nemo, seriously, you get to find Nemo, although he isn’t a clown fish.

A first player is provided with a very comprehensive tutorial which is themed as though the player character is being put through an initiation phase of coming out of cryo-sleep, so in a dream-like simulation environment, the controls are explained and some enemies are introduced to allow characters to understand the vessels dynamics and movement; this is nicely done.

The controls are appropriately well laid out and simple for any casual gamer used to WASD navigation. The weapon systems are a left and right click fire with the ability to change weapons using numbers 1-4 if equipped. 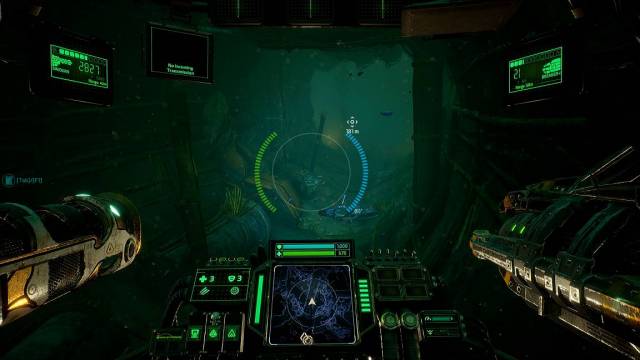 Navigating the submarine towards the target on the HUD, through caves and obstacles.

Although the developers shine with such intuitive and simple controls, there is a noticeable disconnect between the size of the vessel and the world in which it travels, that is to say that the vessel is simply too big to actually fit the world and it should get stuck almost everywhere. Instead, the focus is on the game play, ease of navigation and the vessel simply moves where you point it; collisions are kept to a minimum.

Although that may be bothersome for some, it is actually a good thing, because the focus is simply on the gameplay and instant ‘action’, with a result that is quite frictionless. 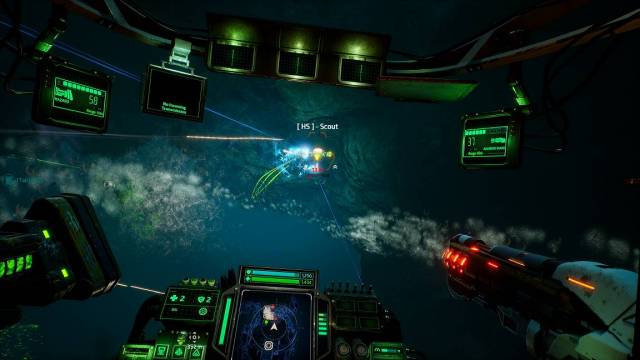 The scout ships are more of an easier target, but deadly in numbers. The submarine can fire both weapons at once.

Unfortunately, the maps are quite repetitive in layout and required movement, the dynamic scenery is limited and despite the lighting and water colour changes, it really feels like you are playing the same map over and over and over.

The player has to mine minerals and salvage from wrecks etc, which are scattered in very specific predicable and notable locations, which are marked on the map. The graphics used for these elements seem kind of ‘meh’ and are uninteresting. The ship must face the object being scanned and wait for the scanner indicator to complete then the salvage is collected by pressing ‘E’. There are no visuals for this though. 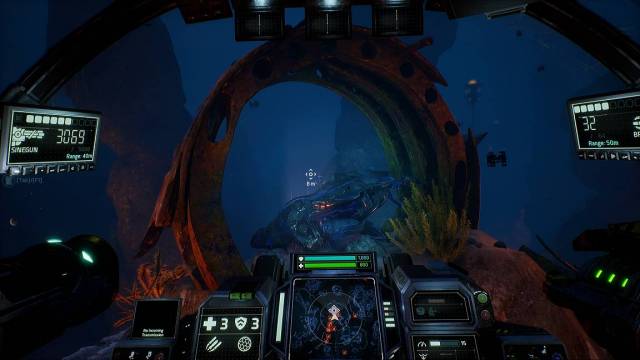 Another ‘fetch’ mission, where you have to scan debris for audio logs to find Nemo. The red dots are ‘nano fauna’. We don’t like Nano fauna. Nano Fauna, baaaad.

The player character story is unfolded via static screen dialog between the NPC’s with subtitles underneath a still image of the NPC and the player character. There are also a few video animations at key moments, but otherwise there is a big detachment between the gameplay and the narrative.

The cockpit of the submarine is very steampunk with hints of futurism, depending upon the layout in question. Outside however, there is a mix of canyons, rocks, caves and seaweed and that is about it really. 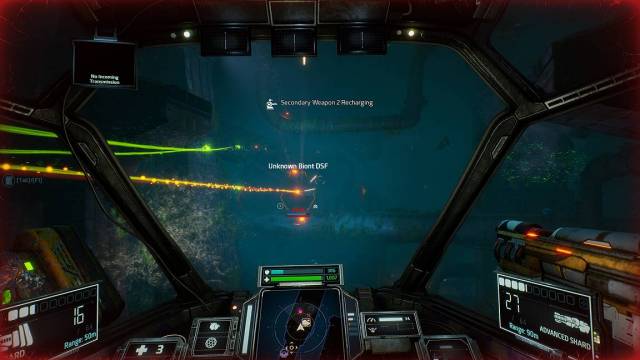 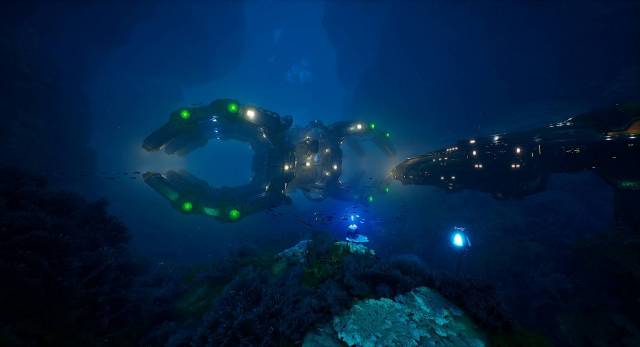 Map transitions are handled by these ‘gates’ which are essentially transition loaders. Nothing special.

Everything looks about right, moves about right and fits the narrative, however there was perhaps a ‘less is more’ approach which missed the mark. Overall, there is a generic commonality to everything and aside from other enemy vessels and sea-life there really is nothing to draw the eye, this may perhaps be by design though.

A great feature is the ability to customize the ships colours, which does not require an in-game upgrade or cost. Although since the colours cannot be seen by the player, it really is for the AI’s benefit.

The sounds of the submarine have been nailed perfectly, the whirring of the motors and the woosh of the turbo is beautiful.

Weapons fire creates an array of sounds depending upon the weapon and they are all delightful. Since some are quite futuristic, it can be only speculative how that would sound from within the cockpit, when the weapon is exposed to water, under deep pressure.

The enemies all seem to announce themselves via radio to you in one of the handful of ‘war-cries’ before they open fire on you. These get old fast, especially without any change between one faction to the other. Still without it, the game would feel empty.

As far as the voice actors are concerned, there are some moments of wonderful acting which is responded to by moments of woeful cringe-worthy acting which simply lowers the experience. This is especially noticeable in the dialogue between the player character and the NPC’s when docked at a station or large vessel.

This game is essentially Free Space but underwater.

When playing this game, there is a general sense that this game had the potential to be a really good AAA title, but somewhere along the line the brakes were tapped perhaps too early to get it to release on time. Although that is purely speculative; one thing is for certain, this game could do with just a bit more polish to bring it up a level or two.

Despite the lack of polish the game is actually quite good, the story is still interesting and the game play is just ‘ready to go’. There is no need for learning a complicated control system, or hours of investment to identify how to identify the tactics to fight enemies, just load it up and start shooting.

This game can offer a great escape for anyone who wants to spend the casual 30-60 min gaming session at the end of a long day of work without using any brain cells.

The repetitive nature of the battle system and scenery will make most players feel like they have mastered the game play very quickly and the story element breaks up this monotony enough to sustain most players attention.