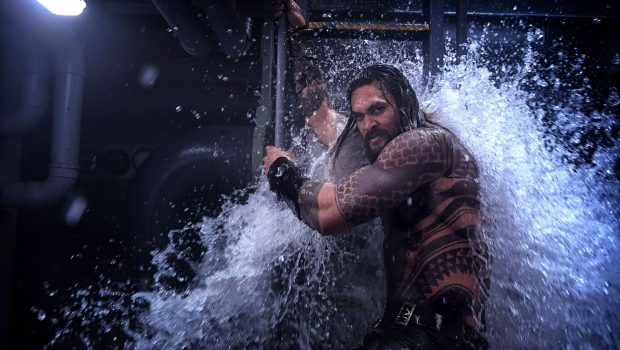 The DC Extended Universe (DCEU) is currently at its lowest point. It started off promisingly with the ambitious but flawed Man of Steel (2013), only to be hit with critically reviled flops, including Suicide Squad (2016) and Batman v Superman: Dawn of Justice (2016). There was hope again for the film universe once Wonder Woman (2017) was released. It was a financial and critical success. However, the goodwill dwindled after the long-awaited Justice League movie tanked.

Plagued with studio edits and restrictions, tragic events and a change of director, Justice League was directly responsible for giving the DCEU a bad name. It may have also resulted in delays to the solo Batman film, Henry Cavill and Amy Adams being unwilling to reprise their roles as Clark Kent/Superman and Lois Lane, respectively, and many other problems. The best superheroes may get beaten down, but they will always get back up. Now we have the latest project from the DCEU, James Wan’s Aquaman.

Wan has proven to be a capable director in the horror genre, having pioneered the Saw and The Conjuring franchises. His ability to steer the incredibly problematic development of Furious 7 (2015) was also underappreciated. It was plagued by the tragic death of its star Paul Walker. Wan deserved more praise for the film’s final cut being as good as it was.

Now he is in charge of helming another blockbuster film. With his directorial expertise, a varied and multicultural cast of rising stars and veteran actors, a huge budget and oddball source material to play with, will Aquaman steer the DCEU back on track?

Set after the events of Justice League, Arthur Curry (Game of Thrones’ Jason Mamoa) is currently living in exile on land and saving people out at sea. He is then contacted by Mera (Amber Heard), who informs him about the power-hungry King Orm (Patrick Wilson), who plans to conquer the remaining oceanic people and the surface world with his vast army.

Despite his reluctance, Arthur is supported by Mera and royal counselor Vulko (Willem Dafoe). In order to complete his quest, Arthur must retrieve the legendary Trident of Atlan and embrace his destiny as protector of the deep and truly become Aquaman.

Does Aquaman succeed in being an entertaining superhero film as well as a course correction for the DCEU franchise? While it may not be a great film per se, Aquaman is a very entertaining ride that shows director James Wan at his energetic best.

What made Furious 7 stand out compared to the other entries in the franchise was that Wan brought a certain sense of vitality to the film. He made the material fresh and full of life again by spinning all the plates of the various characters.

By giving each of them their moment, he indulged in the insanity of how far the limits of the franchise could be stretched and coalesced them into a very entertaining whole. With Aquaman, he brings the same type of verve to the material and it really makes all the difference. 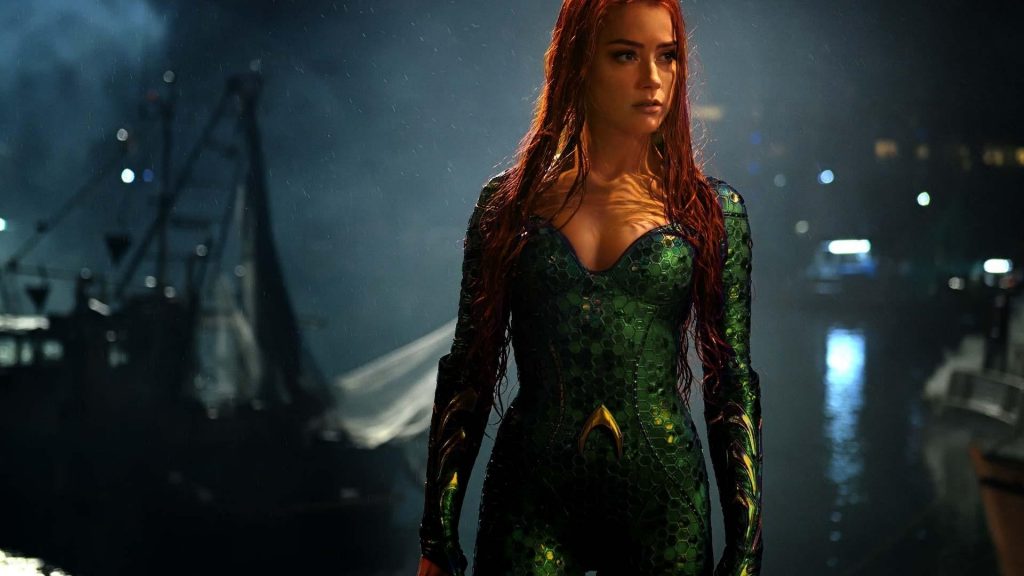 The pacing is so fast that the editing by Kirk Morri starts to crumble. This is apparent when moments of exposition are dealt with in such a swift way that it almost becomes a running joke. For example, there are scenes when Vulko starts to explain something and Arthur rebuts with lines such as, ‘Really? Another story?’.

The peak of this running joke is reached in the middle of the exposition scenes when villains repeatedly intrude, and an action sequence ensues. It brings an underlining sense of self‑awareness that action is paramount across the film’s running time of nearly 150 minutes.

Most of the exposition is well-executed through the visual storytelling and world building. The special effects crew deserve enormous credit for creating a world that is wondrous and insanely goofy. 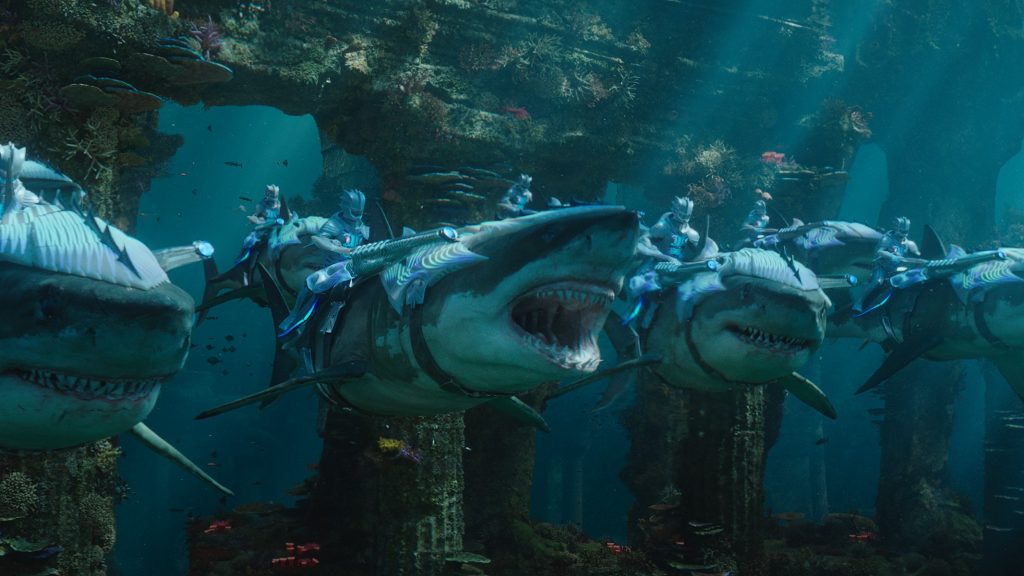 There are many moments and sights that could only have emerged from a fantastical comic world. Its inspirations include tokusatsu-style television series and sci-fi stories such as The Abyss, Humanoids from the Deep and especially Journey to the Centre of the Earth. There are also sharks with ‘frickin laser beams attached to their frickin heads’, an octopus that plays music out of shells like a drum kit and weapons that can be armed with water. Thankfully, Wan and the scriptwriters embrace the material with utmost sincerity, which makes the film amusing and fun without it coming off as abrasive.

The varied and multicultural cast assembled are all in for Wan’s comic vision, and unlike Justice League, they all treat the material the same way. Amber Heard nails the aura of Mera; she provides convincing action chops, conviction in her character’s motivations, the overall wonder of witnessing new things outside of her world and is generally a great foil to Arthur’s antics.

Patrick Wilson brings both pantomime fun and grounding to the role of Orm and makes the most out of the part, despite the ridiculously entertaining costumes he must wear and the moniker that he’s donned with: the Ocean Master. The rest of the cast, including Nicole Kidman, Temuera Morrison, Willem Dafoe, Dolph Lundgren, Yahya Abdul-Mateen II, Julie Andrews and others, add credibility, colour and fun to the proceedings. 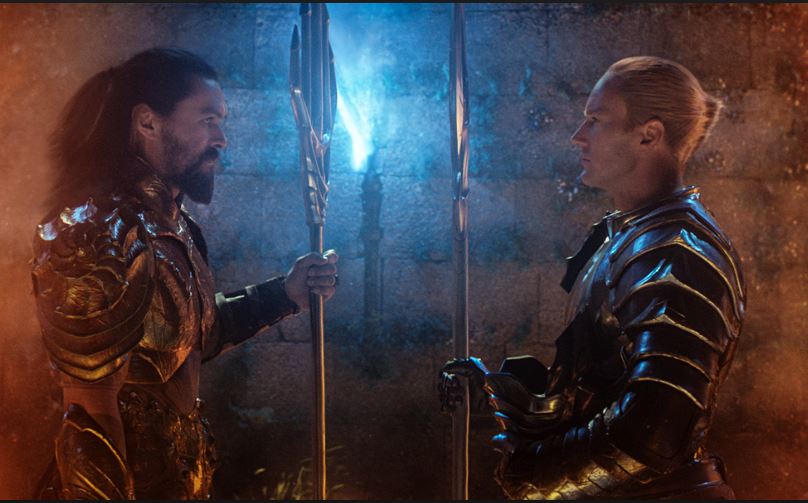 But let’s look at the star of the show. Saddled with terrible circumstances, Mamoa’s debut performance as the titular role in Justice League was poor. Thankfully, all is redeemed, and it is perfectly clear why Mamoa was cast. Similar to the casting of Gal Gadot as Wonder Woman/Diana Prince, Mamoa may not have much acting range, but he certainly has the presence, the physique and especially the charisma to pull the role off. He is so charismatic and joyous in the role that he genuinely looks like he’s having the time of his life, but never at the expense of the audience.

The film does overuse CGI to the point that it resembles a video game. Also, the musical score by Rupert Gregson-Williams is good overall but tends to be a mishmash of styles. The way it veers from orchestral to synthesizing jars. The biggest problem though is the formulaic script co-written by Wan. The story itself plays too predictably, and the beats are overly similar to many others, including The Lord of the Rings, the Indiana Jones films, The Little Mermaid and many more.

Aquaman is an incredibly silly and derivative due to its adherence to the source material and the anemic and uninspired script. Thankfully, James Wan’s directorial eye brings much-needed energy to the proceedings, and an element of sincerity to its goofiness that is highly appreciated. With the game cast, a charismatic lead performance by Jason Mamoa, the electrifying visuals and a fun tone, Aquaman is a cinematic wave you will want to catch.

Summary: While it may not be a great film per se, Aquaman is a very entertaining ride that shows director James Wan at his energetic best.