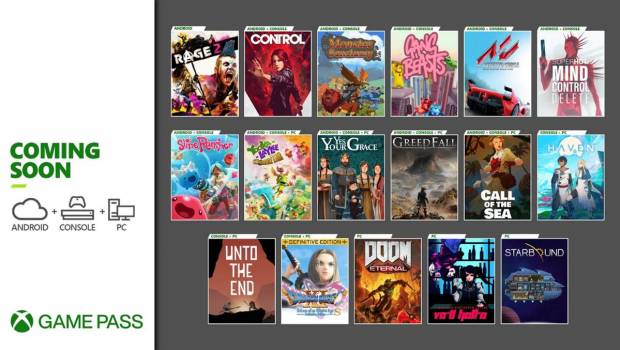 Another Wave of Great Games Coming To Xbox Game Pass!

A lot of you are new to Xbox Game Pass right now (hi everyone!) and to those of you lurking here to check out what games will be coming soon – hi to you too! We have a big list of games coming at you, and to sweeten the deal for those that haven’t tried Xbox Game Pass Ultimate yet, for a limited time starting December 3 you can get your first three months for $1! That’s all the games we already have, plus everything coming soon here below, all our Perks (like 30 days of Disney+!) and starting December 15 all the EA Play titles on PC as well. *Slaps roof of Xbox Game Pass Ultimate * You can fit a lot of games in here for just $1!

And for everyone (new, lurking gamers, and long-time Game Pass community members alike) let’s get to the games!

Control (Android & Console) – December 3
After a secretive agency in New York is invaded by an otherworldly threat, you become the Director struggling to regain control. This third-person action adventure game will challenge you to master a combination of supernatural abilities that will keep you on the edge of your seat.

Doom Eternal (PC) – December 3
Now coming to Xbox Game Pass for PC! Hell’s armies have invaded Earth and now you must become the Slayer in an epic single-player campaign to conquer demons across dimensions and stop the final destruction of humanity. Experience the ultimate combination of speed and power in Doom Eternal – the next leap in push-forward, first-person combat.

Haven (Console & PC) ID@Xbox – December 3
Does love really conquer all? Play as two lovers who gave up everything and escaped to a lost planet to be together. Glide through a mysterious landscape, explore a fragmented world and fight against what’s trying to tear them apart in this RPG adventure about love, rebellion, and freedom.

Rage 2 (Android) – December 3
Dive headfirst into a dystopian world devoid of society, law, and order. Rage 2 brings together two studio powerhouses – Avalanche Studios, masters of open world insanity, and id Software, creators of the first-person shooter – to deliver a carnival of carnage where you can go anywhere, shoot anything, and explode everything.

Slime Rancher (Android & Console) ID@Xbox – December 3
Slime Rancher is the tale of Beatrix LeBeau, a plucky, young rancher who sets out for a life a thousand light years away from Earth on the “Far, Far Range” where she tries her hand at making a living wrangling slimes. Attempt to stake a claim, amass a fortune, and avoid the continual peril that looms from the rolling, jiggling avalanche of slimes around every corner.

Va-11 Hall-A: Cyberpunk Bartender Action (PC) ID@Xbox – December 3
Welcome to Va-11 Hall-A, the original cyberpunk bartending simulator! Take on the role of Jill Stingray, bartender at the downtown watering hole of Va-11 Hall-A (affectionately nicknamed “Valhalla”). In this story-driven game you’ll influence a myriad of decisions through the drinks you prepare, so listen carefully to your clients and mix the drink that will change their lives.

Yes, Your Grace (Android, Console & PC) ID@Xbox – December 3
In this kingdom management RPG, petitioners will arrive in the throne room each turn to ask for your advice and assistance. Decide whether to help them with their problems, or to conserve resources for more important matters. Remember: supplies are limited, and not everyone has the kingdom’s best interests at heart…

Dragon Quest XI S: Echoes of an Elusive Age – Definitive Edition (Console & PC) – December 4
Follow the perilous journey of The Luminary who must uncover the mystery of his fate with the aid of a charismatic cast of supporting characters. This Definitive Edition includes all the content from the acclaimed Dragon Quest XI, and adds extra scenarios, a grand orchestral version of the music, the ability to switch between 2D and 3D graphic modes, a Japanese audio option, and much more!

Call of the Sea (Android, Console & PC) ID@Xbox – December 8
Dive into an otherworldly tale of mystery and love set in the 1930s, South Pacific. Play as Norah, an enigmatic woman on the trail of her missing husband’s expedition. The search takes place on a strange but beautiful island in the South Pacific, filled with secrets waiting to be unearthed. Call of the Sea is a story-led game with puzzles, where every clue leads you deeper and leaves you questioning everything.

Monster Sanctuary (Android & Console) ID@Xbox – December 8
On your quest to become the ultimate Monster Keeper, you’ll unravel the cause of a mystery that threatens the peace between humans and monsters. With over 100 monsters to encounter and dangerous lands ahead, you’ll need to build a powerful team if you want to save the Monster Sanctuary.

Starbound (PC) ID@Xbox – December 8
In Starbound, you can create your own story! In this space-sandbox adventure you may choose to save the universe from the forces that destroyed your home, uncovering greater galactic mysteries in the process, or you may wish to forego a heroic journey entirely in favor of colonizing uncharted planets. Farm, collect, craft and build – the possibilities are limitless.

Unto The End (Console & PC) ID@Xbox – December 9
Unto The End is a challenging combat adventure game in the style of a cinematic platformer. The story is simple: get home to your family. Master read-react combat in intense sword fights. Spot opportunities to trade and use items. An adventure told through your actions; how will you make it home?

Gang Beasts (Android & Console) ID@Xbox – December 10
Gang Beasts is a silly multiplayer party game with surly gelatinous characters, brutal slapstick fight sequences, and absurd hazardous environments, set in the mean streets of Beef City. Customize your character and fight enemies in the melee game mode or fight with friends against the gangs of Beef City in the gang game mode.

GreedFall (Android, Console & PC) – December 10
Engage in a core roleplaying experience with GreedFall, and forge the destiny of a new world seeping with magic, and filled with riches, lost secrets, and fantastic creatures. With diplomacy, deception, and force, become part of a living, evolving world. Influence its course and shape your story.

Superhot: Mind Control Delete (Android & Console) ID@Xbox – December 10
Time moves only when you move. The long-awaited third game in the groundbreaking Superhot franchise, Mind Control Delete gives you more insight into the signature power fantasy world of Superhot with more story, more signature gameplay, more action, more guns. Keep dancing the slow-motion ballet of destruction for so much longer than ever before.

Yooka-Laylee and the Impossible Lair (Android, Console & PC) ID@Xbox – December 10
Get the Royal Beettalion ready to take down Capital B and his Impossible Lair! Join Yooka and Laylee in an all-new 2.5D adventure! Run, jump, and roll your way through a series of challenging 2D levels and explore a puzzling 3D Overworld packed with secrets and collectibles.

Starting December 3, Ultimate members will have new ways to play these cloud enabled games via their Android devices – each now featuring touch controls!

Mount & Blade: Warband (PC) ID@Xbox
In a land torn asunder by incessant warfare, it is time to assemble your own band of hardened warriors and enter the fray. Lead your men into battle, expand your realm, and claim the ultimate prize: the throne of Calradia! Mount & Blade: Warband is a stand-alone expansion pack for the game that brought medieval battlefields to life with its realistic mounted combat and detailed fighting system.

Age of Empires II: Definitive Edition Free Anniversary Update
It’s time for a Battle Royale, Age of Empires style! Celebrate Age of Empires II: Definitive Edition Anniversary update including a new game mode, and new features to help welcome our growing community, balance changes, bug fixes, and more! The new Battle Royale mode pits up to 8 players against each other in a free-for-all contest to see who can be the last combatant standing! Read more.

Fallout 76 Steel Dawn Update
Steel Dawn is the first chapter in the new Brotherhood of Steel questline, free for Fallout 76 players. Paladin Leila Rahmani and her troops have arrived from California to establish a new Appalachian chapter. Work with or against the other Factions to achieve success. Visit settlements populated with new NPCs and unlock powerful weapons and armor from the Brotherhood arsenal. Join in their mission to rebuild society and aid in securing valuable technology – but only you can determine how it will be used.

Golf With Your Friends: The Deep Free Update
Swing into some fast-paced mini golf action in Golf With Your Friends! Play with up to 12 players on a range of whacky courses simultaneously for some of the most exciting mini-golf you’ll ever experience. If that’s not thrilling enough, powerups can be enabled to sabotage your now ex-friends!

Microsoft Flight Simulator: Free World Update II: USA
USA features an improved digital elevation model with resolution up to one meter, along with new aerial textures for significantly better appearance in several states across the country. Add to that, four new hand-crafted airports (Atlanta, Dallas/Fort Worth, Friday Harbor, and New York Stewart), visual and logical improvements to 48 more airports, plus 50 new high-fidelity POIs, and your state-side journey is sure to be stunning. Visit the Marketplace to download the USA content bundle and enjoy the majesty on display in the Land of the Free and the Home of the Brave. Read more.

Minecraft Dungeons: Howling Peaks DLC – December 9
Xbox Game Pass members save 10%! Danger awaits atop mighty peaks, and it will take a hero to stop the brewing storm! The path to the summit will lead you to new mobs, missions, and gear – just don’t look down. Plus, with the new cross-platform free update, you can create a multiplatform alliance and battle together!

Don’t forget to claim your Perks by going to the Perks gallery on your Xbox Series X|S or Xbox One consoles, Xbox App on Windows 10 PC, or the Xbox Game Pass mobile app on iOS and Android!

Gears 5 – The New Day Bundle
Make sure to claim this Perk before it leaves on December 4! Tag in with The New Day. Grab character skins for Big E, Kofi Kingston, and Xavier Woods in addition to a weapon skin set and other extras.

Discord – 3 Months of Discord Nitro
Did you miss out on claiming your Discord Nitro Perk earlier this year? Well, we have you covered. Starting December 2, new to Nitro members can enjoy 3 months of an enhanced Discord experience normally at $9.99 a month. Take advantage of features like custom and animated emojis anywhere, animated avatars, 2 Server Boosts a month, custom profile badge, and more.

Make sure you check your daily, weekly, and monthly quests! As a holiday bonus for December, we are doubling the points you can earn from Ultimate Quests for EA Play and Xbox Series X|S Optimized titles. Don’t worry, you can still earn the double points playing on an Xbox One console too! Some examples:

You’ve made it down to the end! There was a lot to cover and I applaud you for your dedication. Follow Xbox Game Pass on Twitter and Instagram and Xbox Game Pass for PC on Twitter for a reminder when each game is ready for you to download and play. See you at the Game Awards friends!