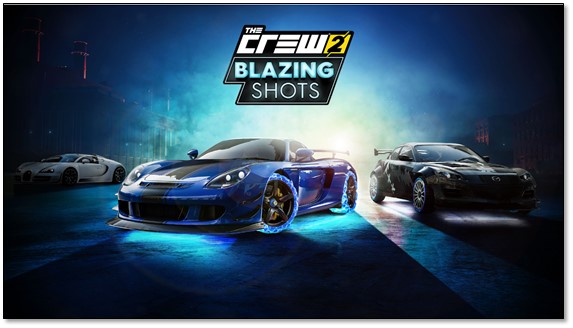 Ubisoft announced that Blazing Shots, the fourth free major update for Ubisoft’s open world motorsports game, The Crew® 2, is now available on PlayStation®4 computer entertainment system and the Xbox One family of devices including Xbox One X and Windows PC. The Crew 2 is also available on UPLAY+,* Ubisoft’s subscription service.

With The Crew 2 Blazing Shots, the competition intensifies with new and unique LIVE Summit events where players must reach the top of the leaderboard to win exclusive rewards based on their ranking. Players can participate in weekly PvE competitions where they can take on nine activities selected among the game’s wide range of playgrounds and disciplines. Additionally, once a month, challengers can also take part in the Premium LIVE Summit that will reward the best competitors with a unique, special edition vehicle.

Additionally, new vehicles will be added throughout the coming months, including some of the most iconic cars ever created such as the Bugatti Veyron 16.4 Grand Sport Vitesse (hypercar) and the Mazda RX-8 (street race). To trick out the rides, a brand-new vanity category, Underglows, is now available, and 78 new vanity items will be added throughout the month so players can create a vehicle fit for a motorsports champion.

Developed by Ubisoft Ivory Tower,** a studio based in Lyon, France, The Crew 2 lets players experience the thrill of the American motorsports spirit inside a fully redesigned USA. The game’s playground pushes physical boundaries to let driving and open world fans test their skills in nonstop competition and exploration. From coast to coast, drivers can explore America and compete to become the greatest motorsports champion by collecting a wide variety of exotic cars, bikes, boats and planes.  Players can dominate the motorsports scene on land, on water and in the air. They can find challenges and inspiration among four different motorsports families: street racing, off-road, pro-racing and freestyle, and players will be given a broad set of options among a wide selection of vehicle types.