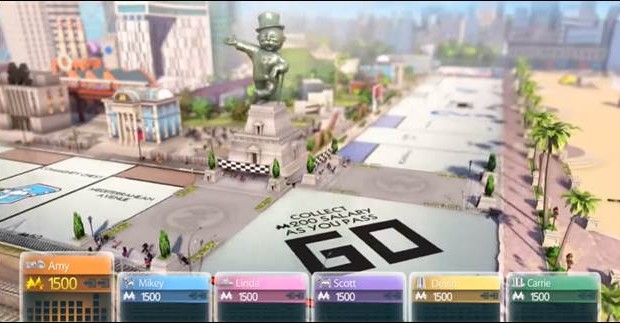 ANNOUNCEMENT: ENTER THE NEXT-GENERATION OF FAMILY GAME ENTERTAINMENT WITH MONOPOLY

Sydney,  Australia – December 2, 2014 – Today, Hasbro, Inc. (NASDAQ: HAS) and Ubisoft® announced that the MONOPOLY Plus, My MONOPOLY and MONOPOLY Deal console games, all based on the famous MONOPOLY board game, can be downloaded on Xbox Live for the Xbox One and Xbox 360 video game and entertainment systems from Microsoft, and on PlayStation Network for the PlayStation®4 and PlayStation®3 computer entertainment systems. The party continues with the MONOPOLY Family Fun Pack, a bundle featuring all MONOPOLY games available which is available for purchase online and at all good retailers.

The MONOPOLY Plus console game brings the classic board game to new heights with a colourful 3D-animated board that comes alive and evolves as players interact with it. Available as an extension to MONOPOLY Plus, My MONOPOLY downloadable content pack pushes the customisation options even further by allowing players to create their own personalised game boards and property spaces. Last but not least, MONOPOLY Deal card game is a new take on the fast-dealing property trading action of MONOPOLY. The MONOPOLY Plus, My MONOPOLY and MONOPOLY Deal console games introduce a fresh, new take on the world-famous family gaming brand, and are the first collaborations between Hasbro and Ubisoft for the Hasbro Game Channel.

MONOPOLY Family Fun Pack can be purchased at retailers on December 4 on Xbox One and PS4, and is available today for download via the PlayStation Network and Xbox Live from $39.95.