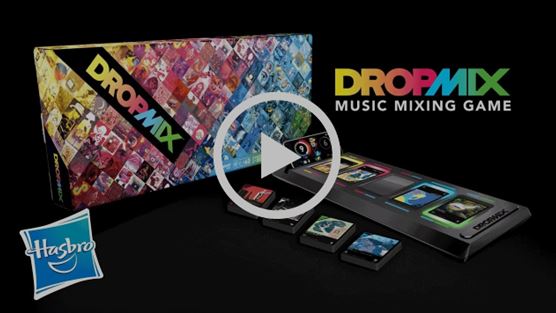 Announcement | Dropmix to launch this November

Sydney, Australia (November  1, 2017) – Hasbro, Inc. (NASDAQ: HAS), a global play and entertainment company, is set to launch the highly anticipated DROPMIX music-mixing game developed in collaboration with video game developer Harmonix Music Systems, Inc. DROPMIX uses cutting-edge technology to empower players to create unique mixes with their favourite hit songs by playing cards on a game board connected to a mobile app. DROPMIX is set for release in early November through Toys R Us, eBay, Kogan & Dick Smith across Australia and in EB Games & Mighty Ape in New Zealand.

DROPMIX is a first-of-its-kind competitive gaming experience that blends physical and digital play to give players a fresh way to combine their favourite artists and songs and discover new ones. When a DROPMIX Card is placed on a Mix Slot, the electronic DROPMIX Board immediately starts playing the corresponding part of the song (bass, beat, loop or vocals) noted on the card. The board reads up to five DROPMIX Cards at time, using NFC chip-enabled cards, and the proprietary software in the app seamlessly combines the music within each card to create a unique mix.

“We are one step closer to fans being able to get their hands on the DROPMIX game and begin to create and discover their own mind-blowing music mixes with their friends,” said Samantha Lomow, senior vice president of Hasbro Brands. “Featuring some of the biggest hits from a variety of genres, the DROPMIX game offers a first-of-its kind music gaming experience that we can’t wait for fans to experience.”

DROPMIX cards feature some of the biggest hits in Pop, R&B, Dance, Indie, Country, Rock, and Hip-Hop from around the world that players can combine in unexpected ways. Announced hit tracks include: