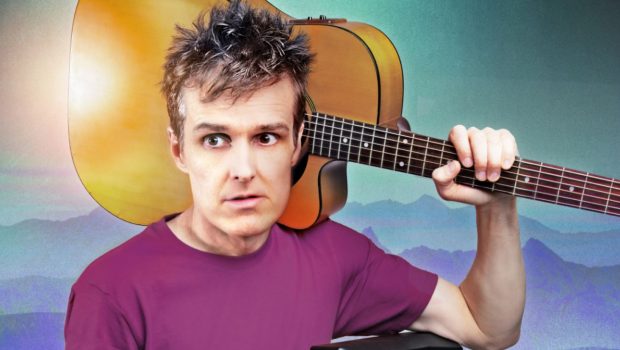 The delightful Mr Andrew Hansen is back at the Melbourne International Comedy Festival and we chew the fat … minds out of the gutter please… to talk comedy, COVID and life!

Growing up, who were comedic inspirations?

Compared to today’s dizzying selection of screen comedy, there was a tiny number of offerings available when I was a kid. The shows back then were also slightly out of date. In Australia, we seemed to have a law against broadcasting any British or American show within 2 and a half years of its original release. So I grew up on whatever comedy the TV networks and local video store decided I could have. It was the UK ones I adored: The Goodies, Monty Python, Fawlty Towers, Ripping Yarns, Kenny Everett’s TV stuff, Blackadder, The Young Ones, and Billy Connolly’s standup gigs on VHS. For some reason the ABC kept repeating the Canadian sketch show Wayne and Shuster, which I watched religiously. I found it captivating if not especially funny. I didn’t mind The Two Ronnies and Some Mothers Do ‘Ave ‘Em, although they were more something my parents would enjoy while I observed from the sidelines. Does The Hitchhiker’s Guide to the Galaxy count as comedy? The TV version blew my mind at the time. But I don’t recall the TV networks offering me any female comics. Perhaps we had a law against them as well.

How did you ‘fall’ into comedy?

It was indeed a fall. I never had a burning ambition to do comedy but I did have a burning ambition to avoid a proper job. I was at high school with Joel Edgerton, though he was a bit older, and we played two of the main characters in a school production of Noel Coward’s play Blithe Spirit. Despite being a co-ed school, our drama teacher cast me as Madame Arcati, the batty psychic. It was a hugely happy experience during a time when I was otherwise very down. I also performed songs and sketches in my school’s variety shows, some of which I wrote, and some of which were ‘cover versions’ of Python. The best one I wrote was a bit I called ‘The Mad Pianist’. It was a music-and-slapstick routine, no dialogue, where I played a Chopin waltz and it went increasingly wrong at every phrase. All of that was terrific fun so I went on and did the same kind of comedy at uni. One uni revue was noticed by Maurice Murphy, who’d directed and produced all sorts of things. He hired me as one of many writers for a TV sketch show pilot for Ten called 60 Seconds, whose premise was the sketches were exactly 60 seconds long. Dreadful idea, we soon realised! Sketches need to be whatever duration they need to be. It didn’t get commissioned, perhaps for that very reason. Next, I sort of wanted to be a musician so I tried that half-heartedly for a few years, but found that the only time the audience enjoyed my songs was when they had jokes in them. Which was fairly often, as Tom Gleeson and Cameron Bruce were in my band. One day, Tom declared he was quitting to become a comedian. I thought he was mad. But he wasn’t, he was just a few years ahead of me and a lot more ambitious. Finally, my comedy break came from being good uni friends with some of the people who started The Chaser newspaper. What stupid luck!

If you could pick one politician or celebrity to create a show due their own personal content that they keep producing, who would you choose and why?

Chris Taylor and I recently wrote a short musical for TV (yet to air) that features Barnaby Joyce as a main character. But I reckon that character could be the basis for a full-length Broadway show. He has a fascinating turn of phrase and uses intriguing leaps of logic that keep everyone on their toes. Even those who disagree with Joyce find him difficult to dislike, which makes him very engaging as a flawed protagonist.

On a serious note, how did COVID affect the industry and you personally?

COVID screwed my last tour, along with the last tours of anyone else who was touring! Also, comedians do a lot of corporate events to make ends meet, and I haven’t had a single booking since the pandemic began. For my tour this year, though, all the venues are COVID-safe and require masks and vaccinations, so we’ve come a long way and seeing a show is now safe (I swear). Personally, I’ve been mostly fine, except for losing an acquaintance to the virus early on. A completely lovely, brilliant person. But I was lucky to have tiny kids during the Melbourne lockdowns, so I was in a sort of locked-down time of one’s life anyhow. Tiny kids are just trying to work out how a ball bounces and what different clouds look like, they’re not keen on visiting Florence or dining at the latest Mexican cantina. Plus I’m an indoorsy, nerdy sort so I really didn’t mind being homebound. Lucky for some!

What self-care super-powers did you use to survive the lockdowns?

I think I mentioned, I have tiny kids. There is no self-care. 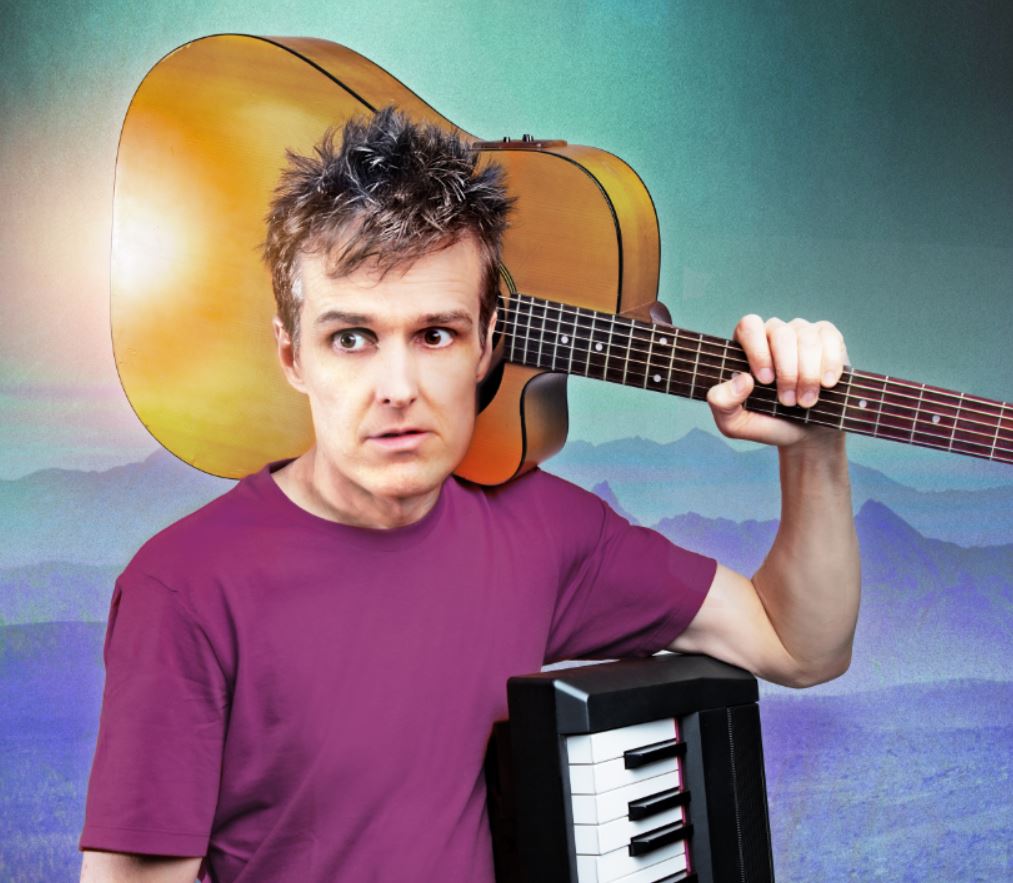 On a not so serious note, what will be the next big thing for humanity?

Nuclear disarmament. Fixing climate change. Food security worldwide. Little things like that. I believe we can achieve all these things if we could just stop fighting for 5 minutes. But to do that, we’d need to rewire our genes to remove the ‘ape’ bit. I think that might therefore be the next big thing: de-ape ourselves.

So where did comedy originate from?

Boredom. I strongly believe people will go to astonishing lengths to avoid being bored. At the top end of the entertainment business, companies like Disney are making billions just by offering ways for people not to be bored for an hour or two.

Everyone Else is Wrong… tell us everything about it, without the spoilers of course?

My live shows are about bringing the chaotic pace and fun and silliness of The Chaser’s War on Everything onto stage. Armed with a guitar, a piano, and an iPad for sound effects, I unleash a mad torrent of sketches and songs about why everyone else is wrong about everything: Gentrification, alternative milks, home delivered shopping, beeping appliances, families, and ultimately the planet and death itself. This show’s also a nifty opportunity to check out the updated 2022 version of ‘The Eulogy Song’, a song Chris Taylor and I did on TV about that odd thing that happens when someone dies and everyone raves about how great they were – even if they were actually a bit of a prick.

Is it safe to sit in the front row?

Yes, provided you wear a mask. And a riot shield.

Lastly, what are you most excited about the MICF?

In the 2010s, the comedy festival became trickier to navigate when it suddenly grew from 24 acts to 38,000 acts. It’s madder than house prices. So it’s easy to be excited by the sheer size of it. There are a lot of great young comics right now, so you’re almost guaranteed a good night out if you dive in and pick an unknown. I mean, pick my show first, obviously. Then try the rest. 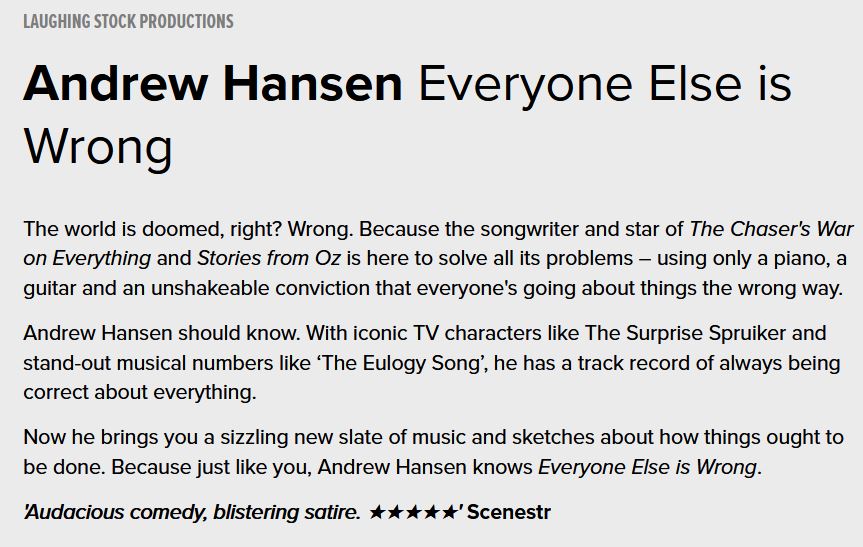