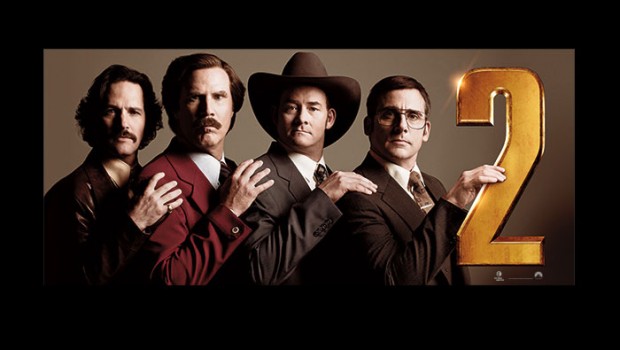 Debuting April 9, 2014 on DVD and Blu-ray™
In a Home Entertainment First the Blu-ray™ version includes
a never before seen SUPER-SIZED version of the film with 763 NEW JOKES
PLUS more than FOUR HOURS of Bonus Features!

Be the first to OWN the long-awaited follow-up to the comedy classic when it arrives 2 WEEKS EARLIER on Digital, March 26
SYDNEY, Aust. – Labeled as “ridiculously awesome” (mX) and “funny, really funny” (SMH), fans and critics agree that “Ron Burgundy and co. pull off a cracker of a sequel” (FilmInk). The highly-anticipated home entertainment debut, ANCHORMAN 2: THE LEGEND CONTINUES, arrives on April 9, 2014 on Super-Sized Blu-ray, DVD and VOD from Paramount Home Media Distribution. Fans can be the first to own the Theatrical Version when it arrives on Digital on March 26.

The ANCHORMAN 2: THE LEGEND CONTINUES Super-Sized Blu-ray includes an alternate version of the film with 763 new jokes! Never before in the history of home entertainment has anyone replaced 763 jokes. This must-own Blu-ray also features OVER FOUR HOURS of bonus content, while the regular DVD also includes commentary by the director & cast, gag reels, more than 90 minutes of deleted, extended and alternate scenes, five behind-the-scenes featurettes, table reads, cast auditions and much, much more!

“When my editor told me we had a whole different version of the movie that was more than two hours long with nearly 800 new jokes, I was shocked” – writer / director Adam McKay

“The original cast is outstanding” (mX) as Will Ferrell, Steve Carell, Paul Rudd and David Koechner who reprise their now iconic roles to take on the 80s and the first 24-hour news channel. Featuring Christina Applegate, Meagan Good, James Marsden, Australian Josh Lawson, and a host of hilarious celebrity cameos, ANCHORMAN 2: THE LEGEND CONTINUES achieved the rare feat of surpassing its predecessor to earn more than $18 million at the domestic box office. “A deliriously barmy, laugh-out-loud sequel that manages to top the much-loved original” (Sun Herald)