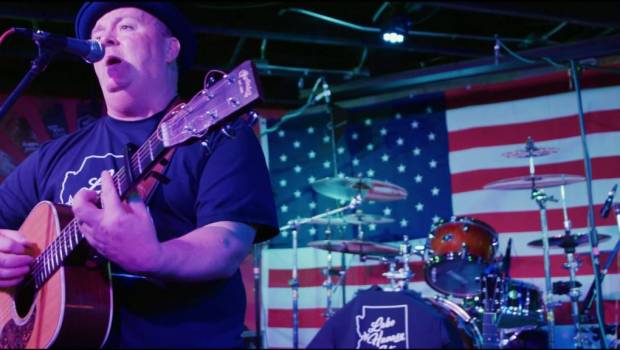 An Irish Story: This is My Home – Film Review

As the world enters forced hibernation and social distancing becomes the new norm, a fun documentary about two Irish musicians embarking on a nation-wide tour of the USA could be what we need right now. Dave Rooney and Dave Browne are the duo The Black Donnellys, an Irish pub band that migrated to America. The film follows the band of merry drunk Irishmen as they try breaking the Guinness World Record by playing sixty performances in fifty states all in forty days. Easy enough right? What could possibly go wrong with a half-baked plan, a busted-up tour van, and a race against time? According to this documentary, everything can go wrong. Gigs are cancelled, tires flatten, and money runs thin. With one world record for the longest live concert (five days!) already under their belt, the two lads don’t let a little adversity interrupt a good time. ‘The plane isn’t working,’ says one of the Daves. ‘Yeah because the fucking Black Donnellys are standing near it!’ cackles the other Dave.

The documentary is highly charming with its two subjects putting on a modest but confident show for the viewers. The problem is that the film is under produced. It starts with a microscopic introduction about the band and then simply jumps into the tour. If some ground rules were set for this world record-breaking attempt then maybe the audience could feel like they’re on the journey too as opposed to just witnessing it. Another strange choice is how the band toured before coordinating with the Guinness World Records organisation about what rules to follow. The tour is as rushed and unprepared as the movie. The music of the band itself isn’t put front and centre. It makes us ask, why do care about this journey? These are the missed opportunities for first time feature length director Karl Nickoley. He previously cut his teeth on short films.

Still, An Irish Story: This is My Home is too sweet to hate. The two musicians are lovely to watch and use their time on screen to give honest and warm recounts of their time on the road. Nickoley also shoehorns in a well-meaning but contrived element of immigration into the narrative as the two Irishmen now call America home. Yet it is undeniably great to see immigrant stories, culture, and positive influences displayed on screen. While far from a must-watch documentary, there is enough sentimentality and charm to make this an enjoyable viewing experience, especially in a lockdown where spreading your wings and hitting the open road is a nice idea of escape in these claustrophobic times.

An Irish Story: This is My Home – Film Review Curtis Mayfield
Score

Summary: The film is too sweet to hate. The two musicians are lovely to watch and use their time on screen to give honest and warm recounts of their time on the road.