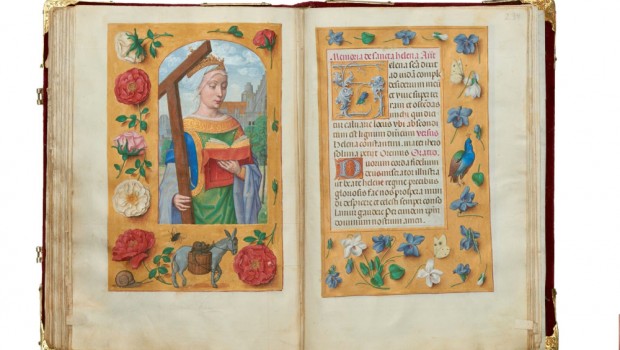 An illumination: the Rothschild Prayer Book

Opening on the 28 August at the Ian Potter Museum of Art, University of Melbourne is one of Australia’s finest private collections of Medieval and Renaissance art.

An illumination: the Rothschild Prayer Book & other works from the Kerry Stokes Collection c.1280-1685 provides an opportunity for Australian audiences to view this specific aspect of the Kerry Stokes Collection for the first time. While Mr Stokes has assiduously built his collection of illuminated manuscripts over forty years, many of the works included in this exhibition, such as the luminous examples of medieval stained glass, the representation of gilt and polychrome medieval sculpture and the Pieter Breughel the Younger painting Calvary (1615), reflect an acquisitions program stimulated by the purchase of the extraordinary Rothschild Prayer Book (c.1505-1510) in early January 2014.

The Rothschild Prayer Book is a masterpiece of Flemish Renaissance art. One of the finest illuminated manuscripts in private hands, this jewel-like Book of Hours originated in Ghent in the southern Netherlands, and contains lavish illustrations by recognised hands, including some of the most renowned illuminators of their day.

The Kerry Stokes Collection contains many pieces that date from the time of the Enlightenment, and a number of items that were created from the period that witnessed the inception of the book and the cultural evolution that followed. Along with the Rothschild Prayer Book, An Illumination contains 40 other manuscripts and decorated incunabula (books, pamphlets or other documents that are printed, and not handwritten) and a selection of over 20 paintings and sculptures; encompassing portraits, devotional panels, crafted furniture and stained-glass sequences. As such, the exhibition provides an invaluable context for the development, creation and use of its centerpiece, the Rothschild Prayer Book, while providing a multi-layered experience of the late Medieval and Renaissance period through a selection of significant religious and secular objects and art works.

Vice Chancellor Professor Glyn Davis said The University of Melbourne is honoured to be part of a celebration of what is one of the finest private collections of Medieval and Renaissance art. “For those with passion for art, history, politics, religion or literature the exhibition is a rare opportunity while the accompanying lecture series will bring to life many of extraordinary items on display.”, he said.

“The Rothschild Prayer Book is a jewel-like object of extraordinary beauty; surprising for the detail and luminous colour of its many illuminations, as fresh as if they were painted yesterday, and for its remarkable combination of religious iconography and lyrical scenes drawn from everyday life. However, for me, part of the appeal of the Book itself, beyond its breathtaking beauty, is its human scale – the fact that it is an object that was made to be used, and to be held. As a Book of Hours, one can equally surmise that its remarkable survival is due in part to exactly this aspect of its nature – that it was a personal and highly treasured object and importantly, that it was portable – able to travel easily with its owner in times of change, upheaval and crisis.” said Ian Potter Museum of Art Director, Kelly Gellatly.

“The Potter is delighted to be able to share this unique selection of Medieval and Renaissance art works with the public for the first time.” said Gellatly.

To accompany the exhibition The University of Melbourne is offering a series of free public lectures and floor talks that will bring to life many of the extraordinary items on display. Six distinguished lecturers from the University will be joined by four independent scholars, all graduates of the University, and four international guests from Britain, the United States and Germany.