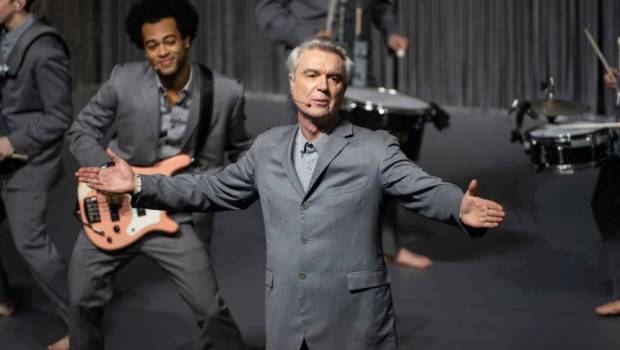 Is music as effective at unifying people as we think? American Utopia seeks to resolve this question by championing inclusion and diversity through song and dance. The challenge the film faces is that people are often unified through their misinterpretation of popular culture. Their political beliefs determine and constrain the trajectory through which they choose to read or hear a song.

For example, a sizable number of protest songs addressing American discontent are misread and celebrated as patriotic anthems. Bruce Springsteen’s ‘Born in the U.S.A.’, Neil Young’s ‘Rockin’ in the Free World’, and Creedence’s ‘Fortunate Son’ are victims of this misinterpretation. Young’s song stresses disharmony within American society but the track recently opened Donald Trump’s campaign rallies. The question about music today is whether it can evoke the right kind of unity.

Utopia, a joyfully constructed concert film, is transparent about its message of inclusion. Meanwhile, its clever presentation is idiosyncratic enough to warrant interpretation. It is based on a Broadway show and an album but surges under director Spike Lee’s cinematic flair. Similarly, its quirky audio‑visual presentation ensures its coda about love and inclusion resists mawkish tendencies.

There is no suggestion either that Lee’s latest joint has softened his political stance. His films are often characterised as angry and biting because of his exploration of deep racial injustice. Music though has always proved integral to his filmography. His debut film, She’s Gotta Have It (1986), reflected his musicality by including an old-fashioned Hollywood musical number and a dominant jazz soundtrack.

A full-blown concert film exploring separation and social unity is a gentler expression of his American dream. Utopia is also led by Talking Heads’ frontman David Byrne who adapts his own 2018 album. Born in Scotland, his family left because his father was Catholic and his mother Presbyterian. Instead of being didactic about love and unity, Utopia is a reminder of Byrne’s personal scars.

Rather than acting as a blandly transposed stage production, Lee’s technical choices amplify Utopia’s credence as a unique cinematic experience. One example is how the film’s monochrome colour tones are pivotal to the thematic goals. All the performers are dressed in the same silver suits and the dark stage is bordered by a silver curtain. The colour scheme and darkened aesthetic suggests that people in America are equally talented despite their inability to see outside themselves. 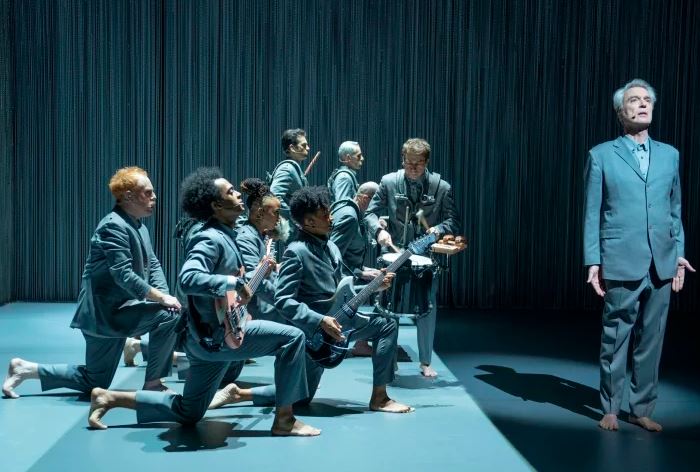 The construction of an early musical number dispels the assumption that Utopia lacks Lee’s auteur imprint. In the musical number ‘Don’t Worry About the Government’, the actors are positioned on white squares. Each person stands still, and their gaze veer away from one another. Lee photographs them from a wide angle so that their lightly coloured squares illuminate them against the darkness.

Through these stylistic choices, Lee visualises a clear political viewpoint. He is dramatising isolation in American society and how people remain in proximity to one another but stay emotionally vacant. The spacing reflects the geocentric nature of Americans who focus on their own desires at the expense of those around them, particularly people of colour. The lyrics of the song further underline this mindset. ‘My building has every convenience. It’s gonna make life easy for me’, sings Byrne.

The song evokes an ironic tone by presenting someone sheltered by their own world. Similarly, the lyrics express naivety about the role of the US government: ‘some civil servants are just like my loved ones. They work so hard and they try to be strong’. The line comically infers that people in the US are unconcerned by the government suppressing people because they themselves remain unaffected. 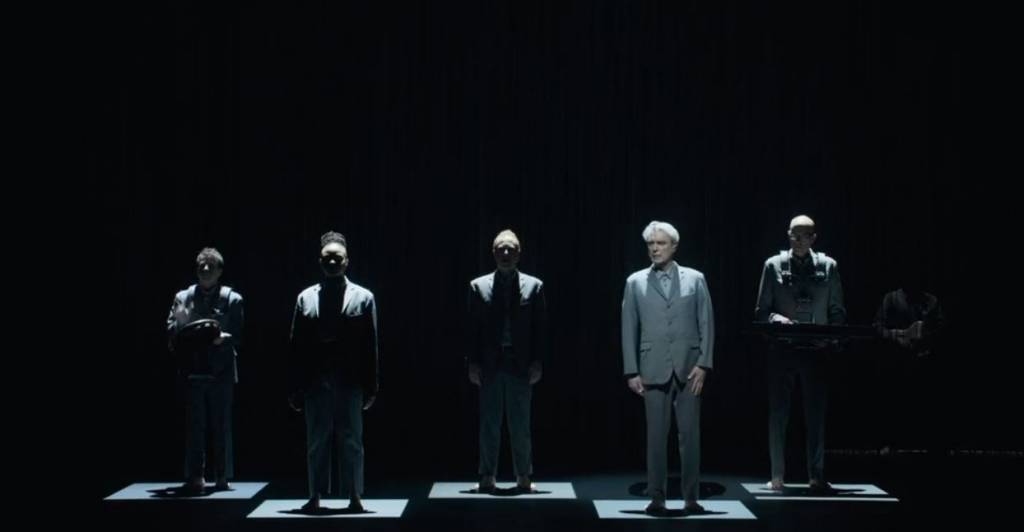 The black background suggests the naivety of people who fail to look outside themselves and understand the dangers of the world. When the song touches on family though the main dancers gently impose themselves using small hand and foot gestures pitched in clear synchronisation. It shows that people from different backgrounds can share the same values without realising their detachment.

The song ‘Everybody’s Coming to My House’ counters cultural isolation by celebrating multiculturalism. ‘Most of us are immigrants and we couldn’t do it without them’, Byrne quips. The audience responds in raptures. Lee builds a strikingly composed visual narrative around this sequence.

The stage lighting glows with an orange palette that replaces the monochrome scheme. The colour filter reflects the warmth of inclusiveness. Byrne is then framed in a medium shot at shoulder length. The tighter framing infers an internal change about welcoming people into American society. 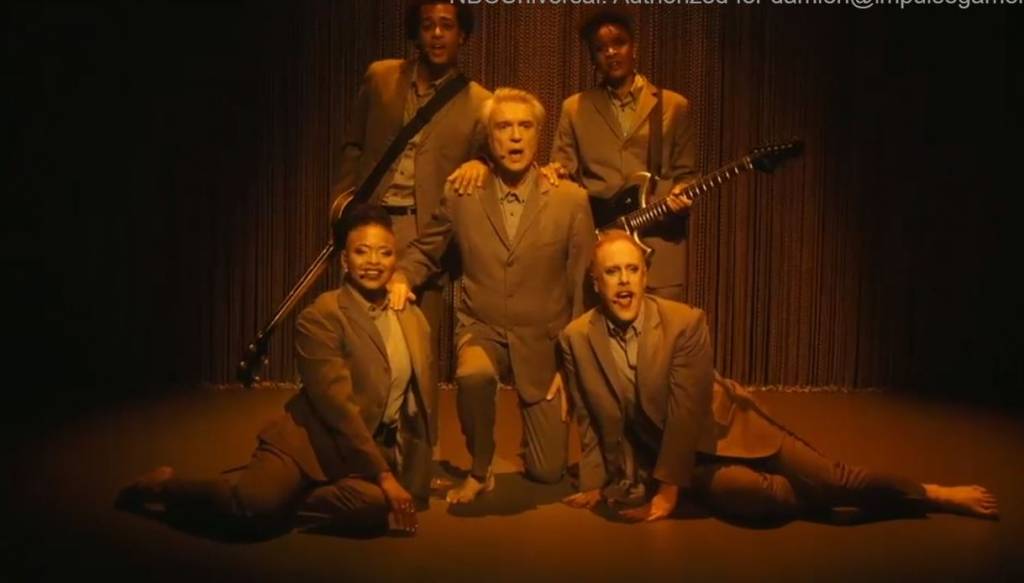 Lee also allows the camera apparatus to mobilise around the stage. He forgoes the still framing by zooming in on the musicians and their cordless instruments. The camera’s fluidity stresses the need for society to open itself to different races and individualism where everyone is valued.

The number closes with a wide-angle shot of five diverse performers. They are positioned close together with each person’s hand on one another’s shoulder. The shot suggests the solidarity between different races. It is further complemented by the lyrics, ‘and they’re never going back home’. Therefore, the frame amplifies Lee’s ability to use stylistic choices to visualise political aims.

One belated sequence shifts from exploring inclusiveness to angrily highlighting racial injustice. The song ‘Hell You Talmbout’ is intercut with images of deceased people of colour, such as Trayvon Martin. These are people who were murdered by the American police. The sequence is evocative of Lee’s unfiltered distress towards white America for how people of colour are suppressed and brutalised. 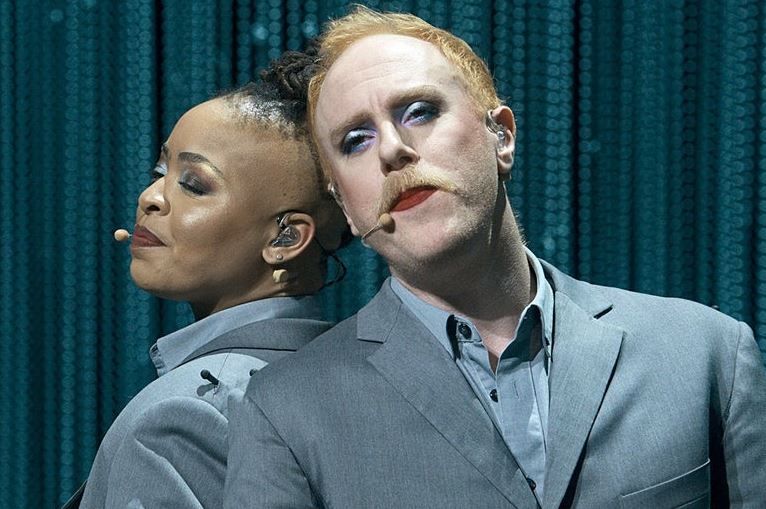 Utopia’s rich audio-visual design is engaging and resists employing intrusive pyrotechnics. Rather, Lee and Byrne have plotted a quirky, multifaceted audio‑visual narrative that champions inclusiveness and diversity. The transparent message reinvigorates music’s power to unify, which means it will not be misinterpreted. The multicultural performers, unique song selection, and stylistic choices counter any potential hokum. It becomes uplifting and surprisingly moving. I saw the film on a home screener but I am looking  forward to seeing it again at the cinema.