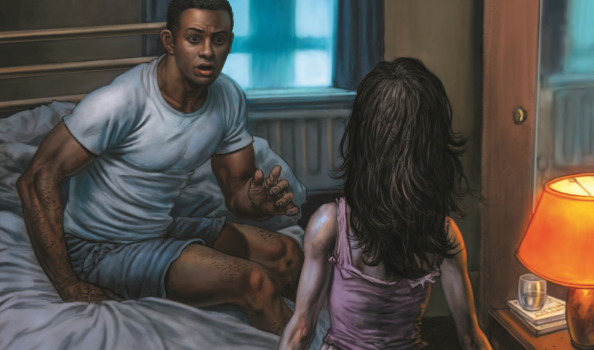 Summary: Things keep getting weirder for Shadow as he delves deeper into the mysterious world of Mr. Wednesday.

After an unexpected and somewhat horrifying visit from his dead wife, Shadow and Mr. Wednesday depart Eagle Point with the city of Chicago in their sights. Once in Chicago, Shadow is introduced to a strange family who seem to be a vital part to Mr. Wednesday’s mysterious plans. So the question remains – What does Mr. Wednesday have planned and why the sense of urgency? 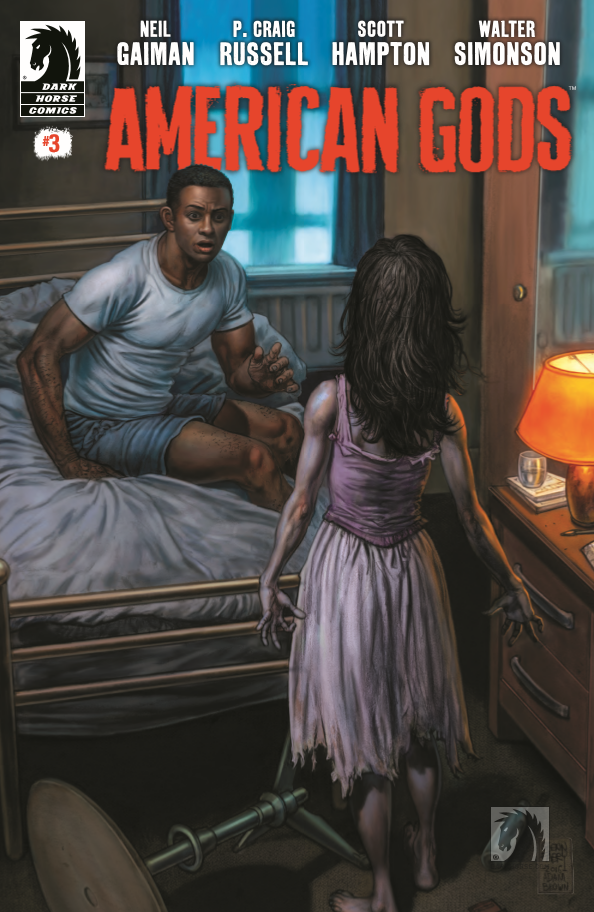 Post-funeral and after a strange encounter with “a fat kid in a limo” a.k.a. the Technical Boy, Shadow goes back to his motel room to relax, unwind and get some shut-eye. After an intense and vivid dream about forgotten gods, Shadow wakes to find his dead wife sitting at the end of his bed. After explaining her affair and the events surrounding her death, Laura tells Shadow she’s watching out for him and after a bile scented kiss, leaves Shadow to quietly reflect on their encounter. The following day Mr. Wednesday and Shadow leave Eagle Point with the city of Chicago in their sights. Once in Chicago Shadow and Mr. Wednesday visit the home of Czernobog and the Zorya sisters, who begrudgingly welcome them into their home. For reasons unknown to Shadow, this odd family is vitally important to Wednesday’s plans as he seeks people to recruit to his cause. We also see in the middle of the issue a short side-story called Coming to America, that has been illustrated by the legendary Walt Simonson with colours by Laura Martin. This beautifully illustrated story explores the vikings arrival in America, and how they brought with them their ancient gods and pagan beliefs. 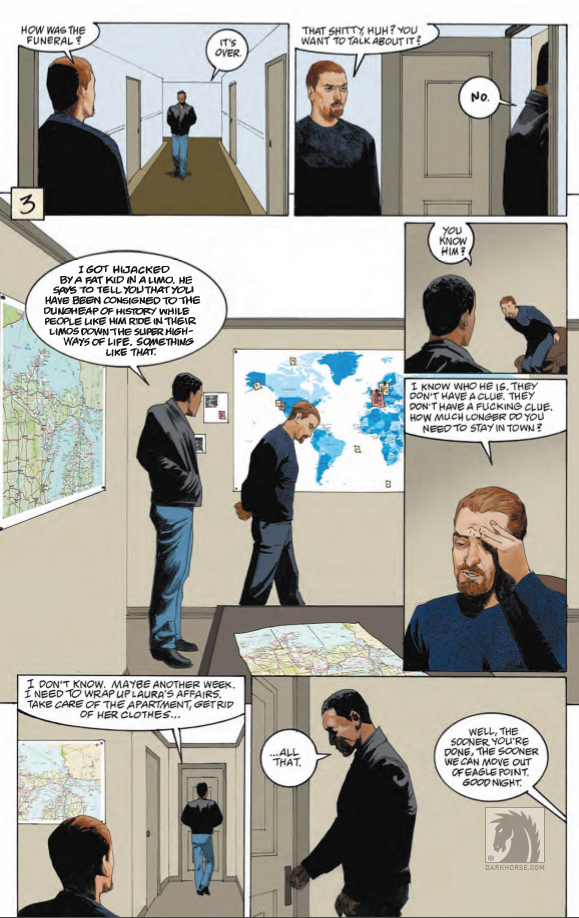 Oh, I do love the sense of the unknown that this story evokes. Everything is shrouded in mystery with cryptic clues and references dotted throughout the narrative. I love how Neil Gaiman can reveal a lot without actually having to make it plainly obvious. It allows us as readers to piece things together, coming to conclusions and theories on our own, which is fun for us and a dynamic way to engage with the reader. reading this comic reminds me how much of a wonderful imagination Gaiman has. The story is engaging on so many levels with never a dull moment dampening the flow of the narrative. We also see Shadow begin to change for the first time in this issue. Previously, he has been very guarded and a stoic figure who has never really expressed much emotion. However, for the first time he lets those barriers down, allowing himself to be vulnerable. If things weren’t already weird for Shadow, they just got a whole lot weirder. The appearance of Laura throws Shadow’s mind into chaos and confusion as he tries to come to terms with the corpse of his wife talking to him. I’ve always had mixed feeling about Laura, a lurking and somewhat confusing presence in Shadow’s life whilst working for Mr. Wednesday. She creeps me out but I’ve always liked that about her, and I understand her importance to Shadow’s journey, with it’s complex and mysterious layers. 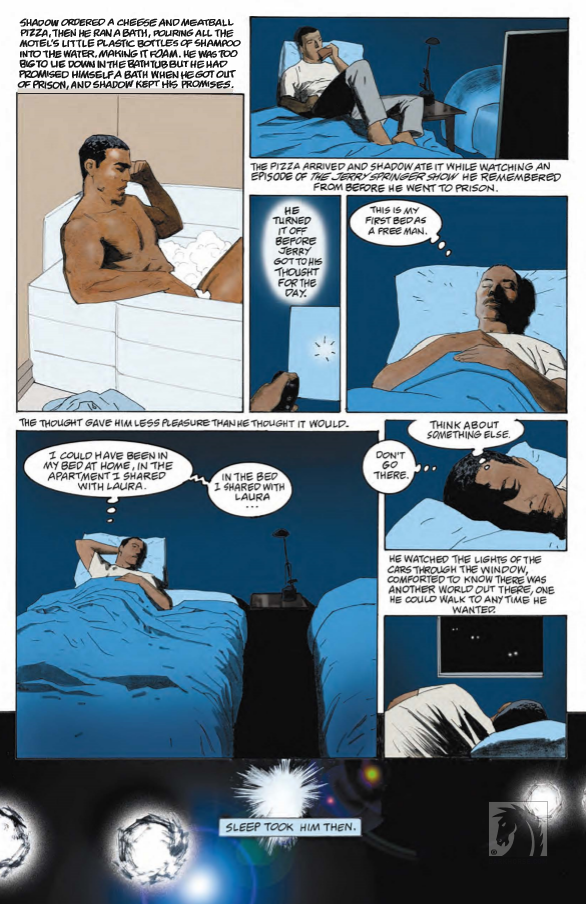 Artist, Scott Hampton, gives an interesting visual representation of this story. His art has a lovely painted quality about it, which really lends itself to capturing intense emotions through expressive interactions. For instance, when Shadow firsts wakes from his nightmare and sees Laura sitting there. His face is frozen in a horrific grimace as he tries to come to terms with what he’s seeing. Also, Laura couldn’t look any more dead or formaldehyde injected than Hampton’s depiction of her. Her stiff body, pale skin and dead eyes are definitely convincing that she is a walking corpse. The colouring captures the unnerving and ominous tone of the story with dark tones that gives an almost bleak quality to everything. There is also a grimy appearance in some of the scenes in Chicago, as textures appear soiled and worn looking, which is a good effect for achieving an aged and lived-in look. I should also mention the art of Walt Simonson for the short-story, Coming to America. It’s lovely to see Simonson illustrate this tale about the vikings arrival in America. His line work is beautifully detailed, giving a sense of texture and depth to these scenes. I enjoyed seeing Simonson’s art being used to break up the main story, as I found it made the story more visually compelling and in no way did the narrative feel interrupted, as it all flowed seamlessly. 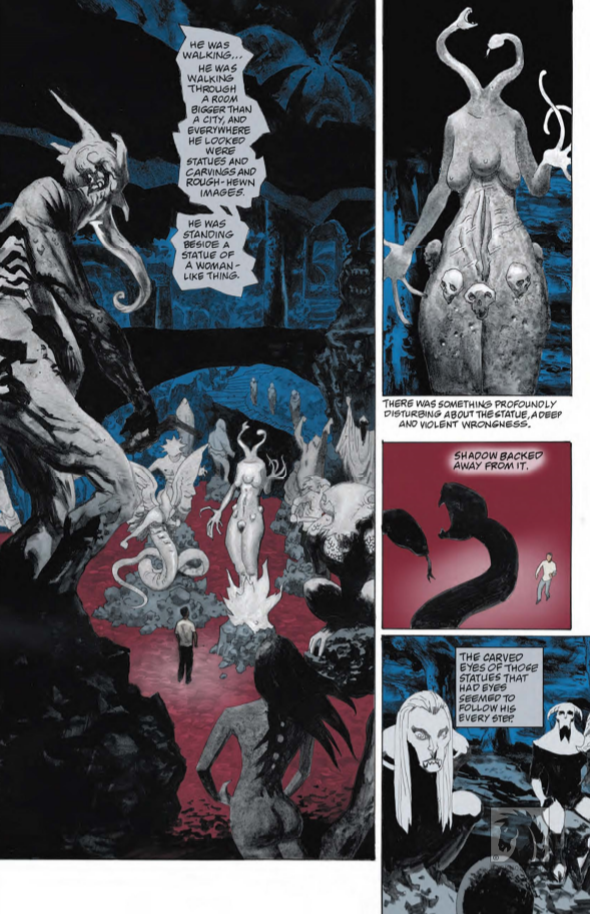 Overall, I’m enjoying this comic adaption of American Gods. P. Craig Russell has been very faithful to the original source material and Scott Hampton’s art brings a whole new dimension to this wonderful story. I’m curious to see how they’ll continue to deliver this classic tale, packaged neatly in a satisfying and enjoyable comic and whether it’ll continue to engage and entertain. I’ve read this novel before but I never tire of this excellent story and seeing it wonderfully adapted by P. Craig Russell makes for a fresh new experience that I’m thoroughly enjoying.