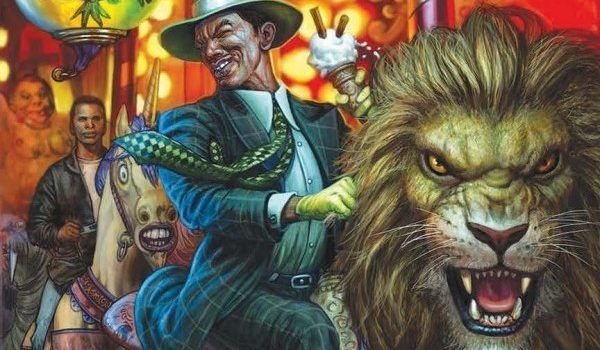 Summary: Shadow embarks on a surreal carousel ride with the gods.

The House on the Rock: a bizarre roadside attraction that is home to the largest carousel in the world, and the next destination for Shadow and Wednesday on their bizarre road trip. Things continue to get weirder for Shadow, as he embarks on a surreal ride with the gods that he won’t soon forget. 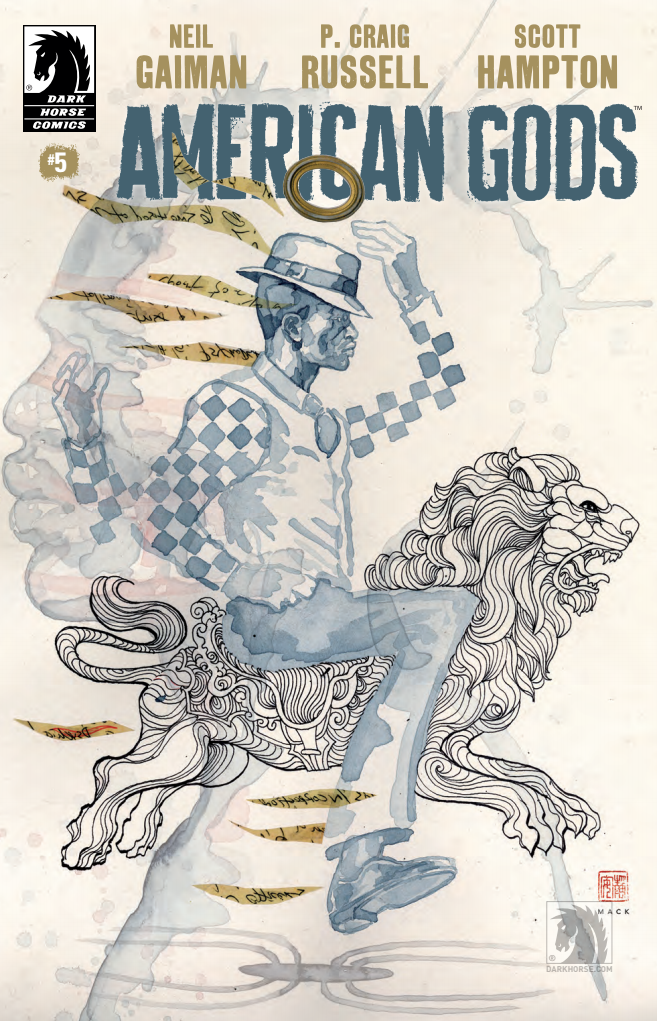 We begin this issue with Shadow and Mr. Wednesday saying their goodbyes to the Zorya sisters. After an interesting conversation with Wednesday, Shadow is instructed to think about snow; huge dizzying clumps of snow, as they attempt the next stage of Wednesday’s plans…robbing a bank. An elaborate, but also simple plan is thought up by Wednesday, fooling people to literally hand over their precious coin, making a direct deposit straight into Wednesday’s briefcase. Everything goes smoothly, suggesting this isn’t the first time he’s done this…the old hustler. Once in Madison, Wednesday reveals the meeting place, the House on the Rock: a place of immense significance and power. In other words, a very auspicious place to hold a meeting with the gods. Ignoring the rules, the group of men jump the barrier, boarding the carousel, making Shadow uneasy as he is worried about being caught. Whilst riding the carousel, Shadow’s worries begin to melt away, as he enjoys a strangely euphoric ride that brings him closer to the world of the gods. 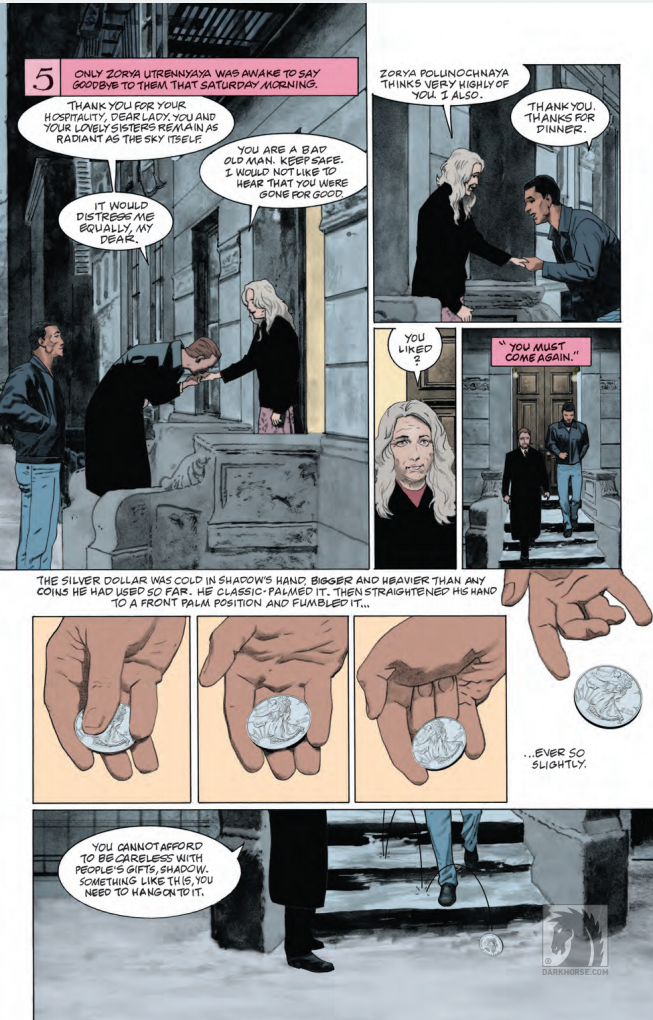 I like the symbolism that is explored in this issue, as Wednesday explains why certain places are more special to the gods than others. We learn why a roadside tourist attraction sometimes might hold more significance than a temple of worship. In America, people feel pulled to this place, to stand in awe of it and somewhat “worship” the spectacle that they are looking at. This makes this a this a special place, a place of power, that the gods know of an appreciate. This for me is one example of that special weirdness that Gaiman injects into his narratives, where we see the surreal mixing and becoming one with the mundane. I should also mention that with the television adaptation of American Gods currently being aired, I can’t help but compare the two. I absolutely love both adaptations, but whilst the show takes more liberties, changing character roles and introducing new plot devices, I believe that the comic adaptation is more faithful to the original novel. I find P. Craig Russell’s adaptation stays faithful to the narrative, only cutting down and editing rather than dramatically changing the flow of the story. 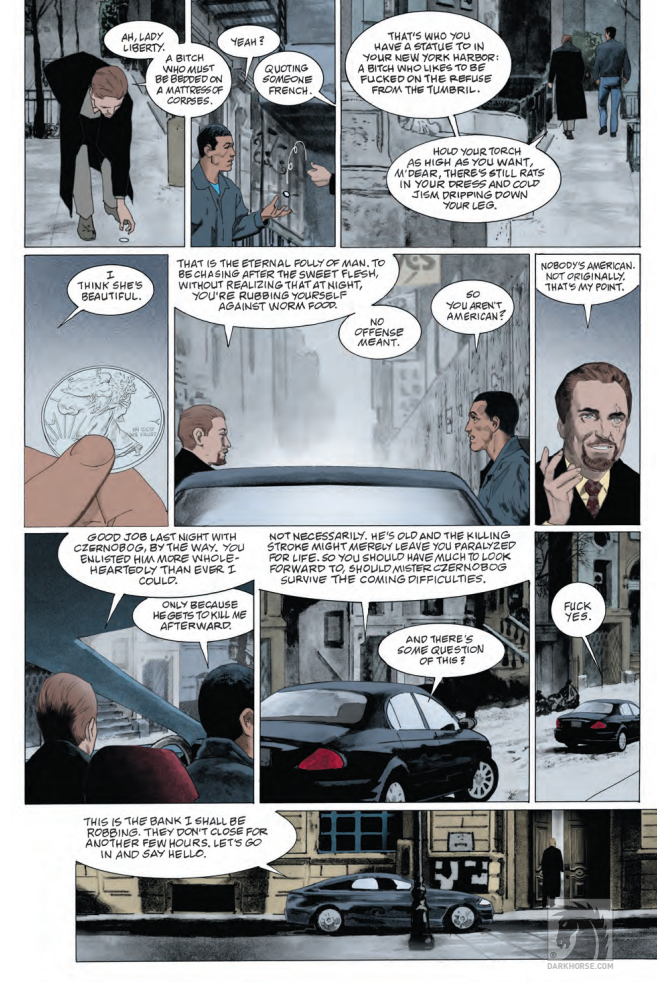 The art, by Scott Hampton, perfectly captures the sense of mysteriousness and the unknown that is driving the narrative forward. Hampton’s heavy shading and use of silhouettes reinforces this, framing everything in a dark and somewhat gloomy world. I also enjoyed the detailed and animated face of Mr Nancy, which reflects his mischievous and cheeky personality. Shadow’s face whilst he was riding the carousel really gave me the feeling of euphoria that he was experiencing, like a child riding his favourite ride in the showground. The panelling during the carousel scene was also very interesting, heightening the strange experience they were all having, and throwing us into a world of disorienting confusion. The colouring effectively frames this world in a cold and icy light, with cool tones and darker colours being used. Inside of the House on the Rock, things are coloured more brightly, with vivid pops of colour bringing the interior, and especially the carousel to life. 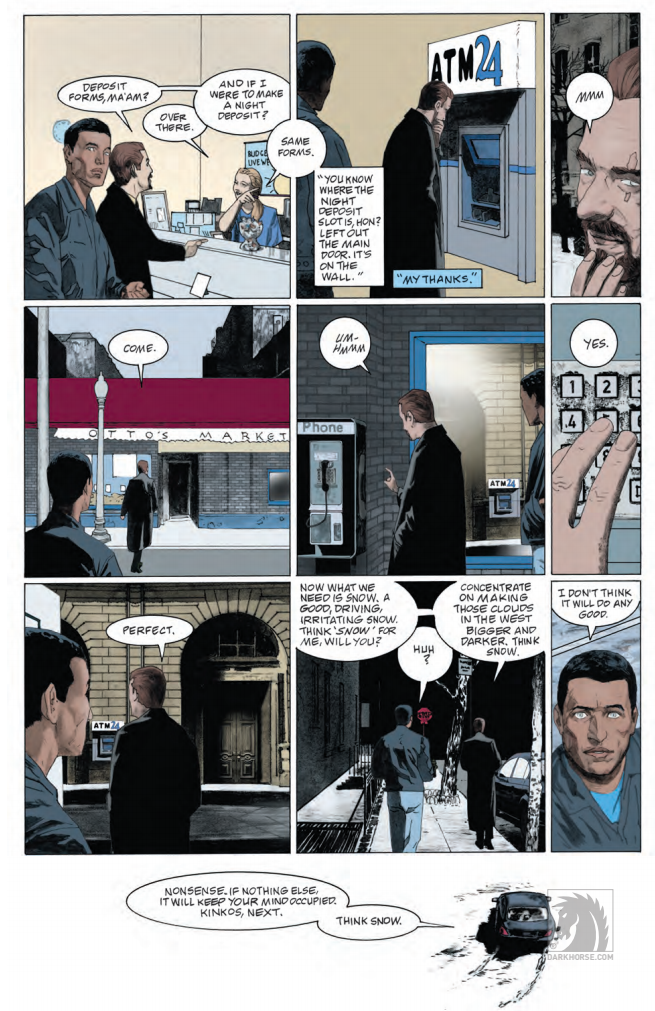 American Gods #5 is a strange and haunting jaunt into a mysterious world inhabited by gods. Things are slowly being revealed to Shadow, which makes for some compelling developments and curious changes in the way that Shadow perceives the world around him. There is a real sense of respect about the way in which P. Craig Russell delicately handles this adaptation, never sacrificing the bones of what makes this story special.