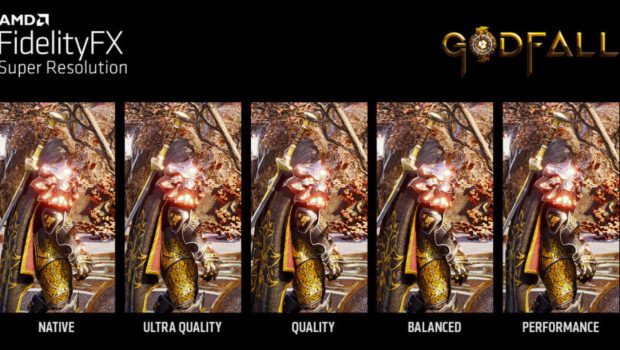 Offering broad support on more than 100 AMD processors and GPUs, FSR delivers 2.4X higher performance on average in “Performance” mode at 4K across select titles compared to native resolution2. The spatial upscaling technology utilizes an advanced edge reconstruction algorithm to analyze features in the source image and recreate them at a higher target resolution, followed by a sharpening pass to further improve quality by enhancing texture details. The result is an image with super high-quality edges and distinctive pixel detail when compared to basic upscaling methods.

“Our goal with FidelityFX Super Resolution was to develop an advanced, world-class upscaling solution based on industry standards that can quickly and easily be implemented by game developers, and is designed for how gamers really play games,” said Scott Herkelman, corporate vice president and general manager, Graphics Business Unit at AMD. “FSR is the industry’s ideal upscaler – it does not require any specialized, proprietary hardware and is supported across a broad spectrum of platforms and ecosystems for all gamers to experience and enjoy. We couldn’t be happier with the response and support by our developer partners and can’t wait for gamers to get their hands on FSR to try it for themselves.”

AMD FSR is expected to be broadly available to game developers in mid-July 2021 as a free download on AMD GPUOpen, the open-source community that provides code, documentation and resources to help developers get the most out of programming on GPUs.

AMD FSR was built in close collaboration with leading studios and game developers. More than 40 developers have pledged to support and integrate FSR into their top titles and game engines, with more expected to sign on by the end of the year and beyond.

“With AMD’s FidelityFX Super Resolution we are able to offer customers improved image quality at a lower performance cost than full resolution rendering,” said Dan Ginsburg, graphics developer at Valve. “This is particularly attractive for users with mid-range GPUs wanting to target higher resolutions. We’re very pleased that it is designed for use with all GPUs and with AMD’s open-source approach with FSR.”

“Implementing AMD Fidelity FX Super Resolution into The Riftbreaker was one of the smoothest technology integrations that we have ever done,” said Pawel Lekki, COO at Exor Studios. “Thanks to AMD’s ‘no black box’ philosophy we were able to very easily implement it on both PC and consoles and tweak it for the specifics of our game engine.”

​More information about AMD FSR, including a comprehensive list of supporting developers and titles, can be found here.