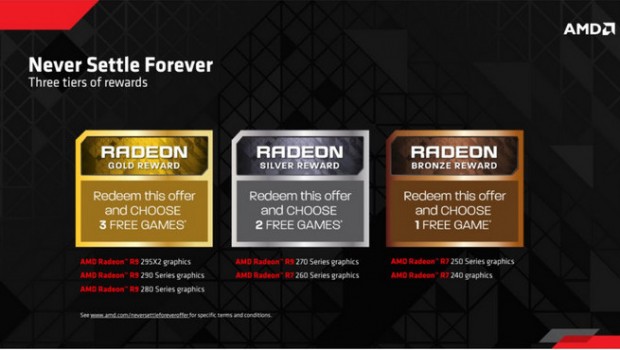 The actual number of available choices will vary by Rewards tier: Gold, Silver or Bronze. “We’re happy to introduce this next chapter for our highly successful ‘Never Settle Forever’ program, delivering on the promise we made a year ago with our Unified Gaming Strategy,” said Matt Skynner, corporate vice president and general manager, Graphics Business Unit, AMD. “AMD’s unrivaled graphics technology, combined with our ever-growing game developer partnerships, demonstrates that we are leading and shaping the gaming industry.” Square Enix’s upcoming title, “Murdered: Soul Suspect™”, will be available in the Radeon Gold and Silver Rewards of “Never Settle Forever” for the first time. Optimised for the Graphics Core Next (GCN) architecture, gamers can secure an early code for the game that may be redeemed when the title launches in June 2014.

“With ‘Murdered: Soul Suspect’, we’re looking forward to continuing the tradition of collaboration between Square Enix and AMD,” said Naoto Sugiyama, executive producer, “Murdered: Soul Suspect”. “We’re dedicated to bringing world-class experiences for PC gamers and look forward to the launch of our game in AMD’s ‘Never Settle Forever’ program.” For the first time ever, AMD is also pleased to announce the inclusion of PC titles from independent game developers to the “Never Settle Forever” program as one of the redemption options. Bundled in sets as an “indie pack,” gamers may choose one indie pack consisting of two indie titles as one of their game selection choices.

“We’re excited to have ‘The Banner Saga’ as one of the first ever titles from an independent game developer to be offered through AMD’s ‘Never Settle Forever’ program,” said Steve Escalante, GM, Versus Evil. “We’re looking forward to the new audiences that our game can reach with Radeon™ users across the globe.”  “Our acclaimed titles are gaining serious momentum among gamers of all ages,” said Graham Smith, co-founder, Drinkbox Studios.

“The introduction of indie packs to ‘Never Settle Forever’ is a great collaboration for AMD and Drinkbox Studios as entry-level AMD Radeon graphics cards can provide solid performance in both of our popular games.” The new Radeon Reward levels, benefits and eligible products for “Never Settle Forever” are as follows:

Selection Options    1 Choice = either an AAA game, AA game or an Indie Pack This “Never Settle Forever” offer will be available starting today at participating retailers and e-tailers. Gamers can redeem right away or save their codes in anticipation of upcoming titles until the promotion ends Aug. 31, 2014.  For more information, please visit: http://www.amd.com/neversettleforever. Supporting Resources •    Learn more about “Never Settle Forever” •    Become a fan of AMD Gaming on Facebook •    Engage with us on Twitter @AMDGaming •    Engage with us on Twitter @AMDRadeon •    Become a fan of AMD on Facebook