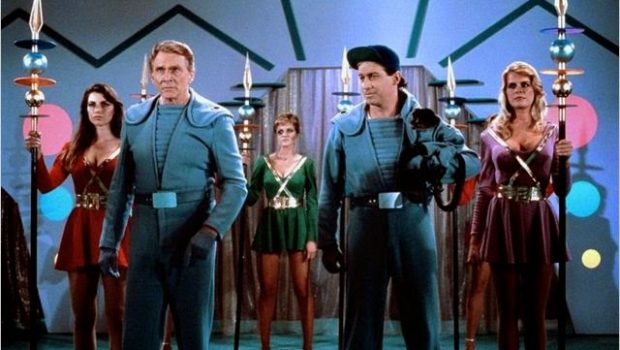 Summary: Quintissential 80s sketch comedy with a cavalcade of well known directors and actors from the era, most of whom went on to bigger and better and funnier things.

Comedy is a funny thing. Literally. Comedy writing is fiendishly difficult. What makes me laugh no doubt will leave you stone cold. And what made people laugh almost 40 years ago can often seem like trying to understand a foreign language.

Amazon Women on the Moon falls into the category. Your reviewer had friends who watched this movie at one of those retro-celebration cinemas that were all the rage in the 80s and 90s. Alongside picking popcorn out of their hair after watching The Blues Brothers, my friends would settle in to watch this movie, calling it an unfairly maligned classic.

So with all that in mind, what is Amazon Women on the Moon? The movie is a series of skits, some very loosely linked by the reapparance of a character, that more often than not speak to the themes of the era – computer dating, buying a condom in the AIDS era, the joys/perils of technology and the way film makers back then viewed the films of their youth.

As with any movie of this type, some skits work better than others. Fortunately, none last long enough to cause pain. Stand outs are Arsenio Hall as a very accident prone person who can’t navigate his apartment without risking his life, a funny funeral service that turns into a roast, featuring Steve Allen as the hoast, Ed Begley Jr as the Son of the Invisible Man, no where near as talented a scientist as his father and a spoof on the Believe it Or Not! series, which asks – what if Jack the Ripper was in fact the Loch Ness Monster. Yes, it can get tha silly.

Some of the other skits aren’t up to much. The teenager trying to buy a packet of condoms, only to be aught up in a marketing extravaganza, really meanders. Others raise more a groan than a chuckle, but as mentioned before, never really outstay their welcome.

The film within a film, which gives this movie its name, is Amazon Women on the Moon. A cheesy riff on cheesy 50s science fiction movies, the acting is appalling, as are the special effects and the writing. More an ironic nod to the genre than trying to generate laughter, it’s so on the nose it’s difficult to tell whether it is satire, or an affectionate homage.

The disc comes with deleted scenes and outtakes. It’s somewhat telling that when the outtakes are funnier than the screened material, you know you’re in trouble.

Overall, Amazon Women on the Moon is an interesting snapshot of an era that brought us Airplane! and Kentucky Fried Movie – fast moving skits masquerading as movies that don’t bear too much scrutiny, but are a pleasant way to spend 90 minutes.