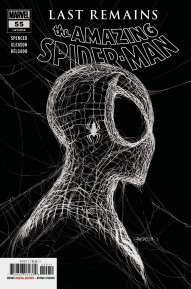 Summary: Apparently, Spencer forgot how to close an arc. As a single issue, this works. As part of a larger idea, not so much.

The Story: It’s a giant cluster of chaos as Peter and Harry duke it out, MJ shows up with a redemption seeking Norman, explosions happen, and Wilson Fisk uses the Darkforce.

Background: Nick Spencer ends the arc that was building since issue 1 or so. He also wastes an amazing (no pun intended) opportunity.

Summary: The whole spider family has been caught and tied up around a table. Peter’s the only one awake and begs Harry to let them go. Harry admonishes Peter for getting the others involved as Mary Jane arrives. Peter breaks free to defend MJ and beats the ever-loving snot out of Harry…and it does nothing. Harry begins to kill Peter again until MJ manages to stop him.  The three sit down to dinner as Norman Obsorn radios Fisk that MJ made it in.

Harry and Peter go back and forth blaming each other for their current situation, one of Harry’s points being how outraged he was and is that the two of them kept the identity of the Green Goblin from him. Peter says that he let him go because he had developed amnesia, but Harry retorts that the real reason Peter let him go was because if Norman had gotten help, Peter’s identity could have been revealed. When Peter questions what turned him into this monster, Harry beats him while exclaiming that it was peter who did.

Mary Jane comments that he doesn’t remember (more on that later). She tries to talk Harry down and almost does, but Harry is intent on seeing this through. MJ offers herself instead. As Harry prepares to kill her, Norman shows up in full costume and after a bit of back and forth, lobs a pumpkin bomb at them. Mary Jane is caught in the explosion and goes flying.

Harry thinks she’s dead and rushes Norman as the Kingpin activates his Darkforce “emitters” (it’s really not made clear where the Darkforce emanates from) and the issue ends with Peter holding a barely alive MJ who tells him that everything is going to be OK. The last page of the issue is utter blackness.

Writing – Let’s cover the largest reveal of the issue: Mary Jane seems to remember Brand New Day. At least that’s how everybody interpreted that line when this was released. It’s long been speculated that Mary Jane remembered the whole Mephisto shebang. While I could see how people could mis-interpret that, I think she was just commenting on the fact Peter doesn’t remember what Harry was accusing him of.

My biggest problem is that the reveal of Kindred has been… so damn underwhelming (at least for me). Kindred could have been anyone else. If Spencer is so intent on seemingly undoing (or at least advancing) BND, it would have been more impactful if Kindred turned out to be the vengeful spiritual remains of their daughter or as some people were speculating ages ago, Kindred could have been the “other Peter Parker”, the one who didn’t make the deal and lived out his life with Mary Jane as his wife.

To be clear, I’ve never had a problem with Brand New Day. It really did bring the book back to basics for a while. Yet if Marvel really has given Spencer the ability to mess with and change the status quo this much, Harry Osborn is the best he could come up with? The same Harry Osborn we’ve seen since he randomly returned from the dead? Who after American son never seemed to show a single iota of menace or evil? The Harry Osborn who NEVER let on that he knew anything about reality changing or anything of the sort? It just doesn’t sit well with me.

Artwork – The artwork since the very beginning of Nick Spencer’s run has been superb and Patrick Gleason’s work here is no different. Everything is suitably dark and murky, and whenever we see MJ things brighten just a bit. It really highlights how she is the lone shining light through all of this craziness.

PS – The reason why this review is so late is that I really do find it easier to have the physical issue in front of me when I write. As writers for the site, we do get advanced digital copies, but I need that physical object in front of me. Apparently, the original printing of this issue had a really cool cover that made people lose their minds, and it took me until about a week ago to track down a second printing copy of it. The original cover was nice, but I don’t see what the hoopla was all about.