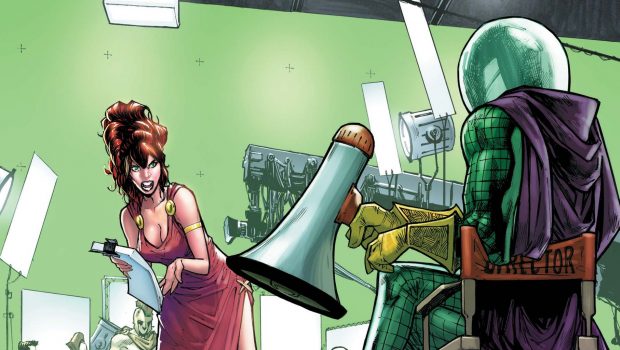 Summary: Art imitates life when Mysterio makes a movie about himself. Hopefully it turns out better than Spiderman Far From Home.

The biopic of Mysterio is having cash-flow problems and Mary Jane is on the case. Unknown to the financiers the director “Cage” is actually Mysterio who does not want people to know he is directing a movie about himself.

While this story is not really big on action, it makes up for it in behind the scenes meta references about the process of making movies and even the Marvel series. Do a series about making the Infinity Gauntlet saga you cowards!

There are a lot of different characters in the Spiderman saga as the story has been rebooted so many times and split off into separate universes so much they even riffed on it in the Into the Spiderverse movie.

I did enjoy this story and it would encourage you to buy the rest of the series just from this one. Unlike other stories I have read you don’t really need to have read the previous one in the series unless you want to.

I would recommend this one if you are a fan of Mary Jane and Mysterio and want to see how the ending they set up in it works out.