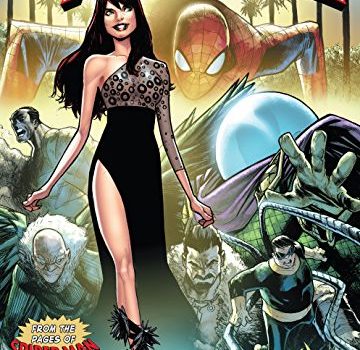 Summary: While the comedy is spot on, The Amazing Mary Jane doesn't justify its existence. Why should I care about this movie?

The Story: It’s an all out battle for the fate of every universe… JK! Mary Jane makes a movie and finds out that some very MYSTERIOUS things are happening.

Background: Mary Jane gets a solo book for some reason.

Summary: Mary Jane is rehearsing a scene in her brand new movie when she realizes the dialogue is crap and that she is a damsel in distress who is also somehow the hero of the movie. After demanding to speak to the director, she discovers that he is none other than Mysterio!

Mary Jane immediately want to quit the film, but Mysterio begs her to listen. He describes the meetings with Hollywood execs. They just laughed at him. His story could never be told. So he assumed the identity of Cage McKnight (who is a real in-story person apparently.) He begs Mary Jane for his help because apparently, Beck is dying…

The staff and crew for the movie are all villains, but they are being paid above the table and everything is legal. After racking her brain with all this info, Mary Jane decides to stick around…BUT Beck must rewrite some of her scenes. When asked what’s wrong, Mary Jane points out that she’s been in a catsuit that squeaks for two days.

Later on, Peter and Mary Jane have a phone conversation and decide to break out dancing on the phione (yes, I wrote that right.) Peter dances at the grocery and Mary Jane in her apartment. They miss each other and hope they’ll e back together soon.

In a hideout, the Vulture, Cobra, Not Lizard (I’m sorry, I don’t know who that is), Rhino, Scorpion, and Tarantula discover the movie and decide to venture to LA…

Final call: OK, so I will give this book credit. It is actually very funny.

First of all, the use of Mary Jane as our proxy is actually a good idea. She’s as human as we are and that allows us to feel her incredulity at all this crazy stuff that is going on around her. She can’t believe she is actually agreeing to help Mysterio even as she’s literally saying the words. Basically, the writing is spot on.

The various sight gags are also a lot of fun. Kangaroo as a light tech, deadly X-men robots that Mysterio just “left” there when he disappeared, actors portraying Daredevil and Mysterio reading scripts, and Doc Ock, Kraven The Hunter, Vulture, and Electro (all actors of course) riding a merry go round.

Here’s the first problem I have with this book: THE DANCE SCENE. I HATE COMIC BOOK DANCE SCENES (at least modern ones)! These scenes always feature the characters at awkward angles and without an idea of what song they are listening to, it just looks terrible.

Here’s the second problem I have with this book: WHY DOES IT EXIST? Nobody was clamoring for a Mary Jane book. The new Spider-man movie is still a couple of years away at most and while the comedy is great, the main idea of trying to get this movie made just doesn’t seem that interesting. It doesn’t justify spending 4 dollars over and over again. It may be good for others, but I simply read too much every week to give this my money.