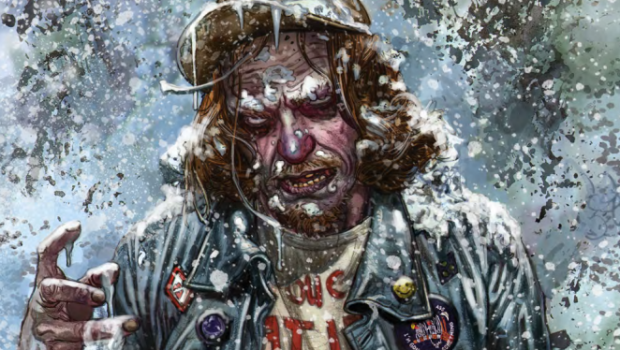 Shadow is still working at the funeral parlour for Ibis and Jacquel, collecting bodies and assisting at funerals. An unexpected visit from Mad Sweeney – who is searching for his lucky golden coin – heralds a change in the everyday rhythm of things for Shadow. After finding out that Shadow no longer has the coin, Sweeney leaves bitterly disappointed and speaking of the doomed fate that awaits him. 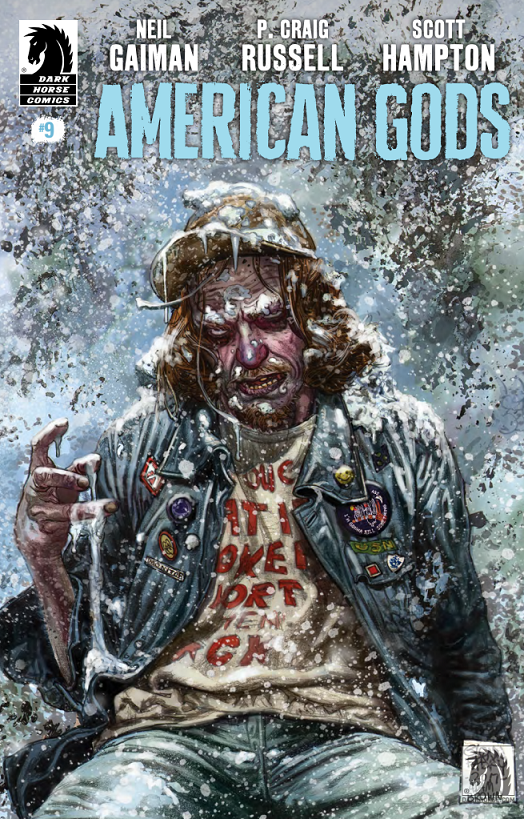 This issue of American Gods begins with Shadow collecting the body of an elderly woman named Lila Goodchild. He places the body in a bag, zips it up and wheels her into the back of the hearse. On the drive home, Shadow questions Jacquel about whether he believes that people have souls. This leads Jacquel to reflect on the good old days back in Egypt, before they condemned themselves by coming to this land thousands of years earlier. When they arrive back home, they settle down to have supper together, after which Shadow retires to his room. He falls into a deep sleep, where he has a sensual dream about a mysterious woman, that quickly turns into a passionate experience, feeling all too real. He awakens confused, naked and sporting claw marks on his back. Shadow then decides to dress and head outside for a walk, where we encounter a panic-stricken and desperate Mad Sweeney under a bridge, who has been searching for him. He has been looking for the lucky gold coin that he accidentally gifted to Shadow. Shadow delivers some devastating news to Sweeney, telling him that he no longer has the coin, as he gave it away. Sadness and grief overcome him, and he begins to speak of the doom that awaits him. Clearly troubled and upset, the asks for some money from Shadow, so that he may get as far away from this place as possible. Shadow obliges, but doesn’t realise that by doing so, he seals Sweeney’s fate. 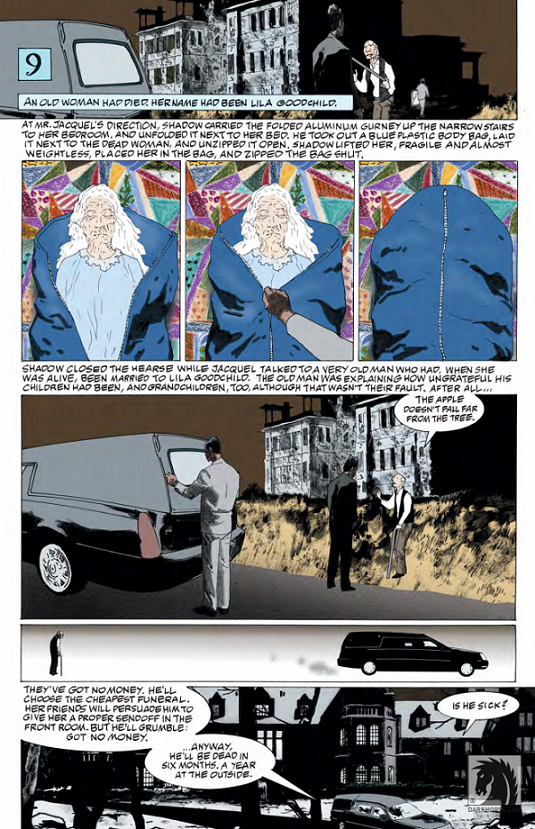 This is a rather sad and somewhat bleak issue of American Gods. Death seems to follow Shadow, like a…ummm…shadow. All of this death doesn’t seem to bother Shadow a great deal, taking his new job at the funeral parlour in his stride. One thing that seems to affect him, however, is his vivid dreams. The dream that we see in this issue is an interesting one, with it being incredibly sensual and highly sexual. There is also a deep sense of unease in the air that has many of the gods anxious and agitated about what the future will hold for them. A storm is coming, and it’s only a matter of time before it hits. We also get to see a rather sad and poignant story, detailing Mad Sweeney’s journey through life from Ireland and over to America. I’ve always liked Mad Sweeney, and I find his banter with Shadow amusing and enjoyable to read. He’s a bit of a tragic character, and I can’t help but pity him. 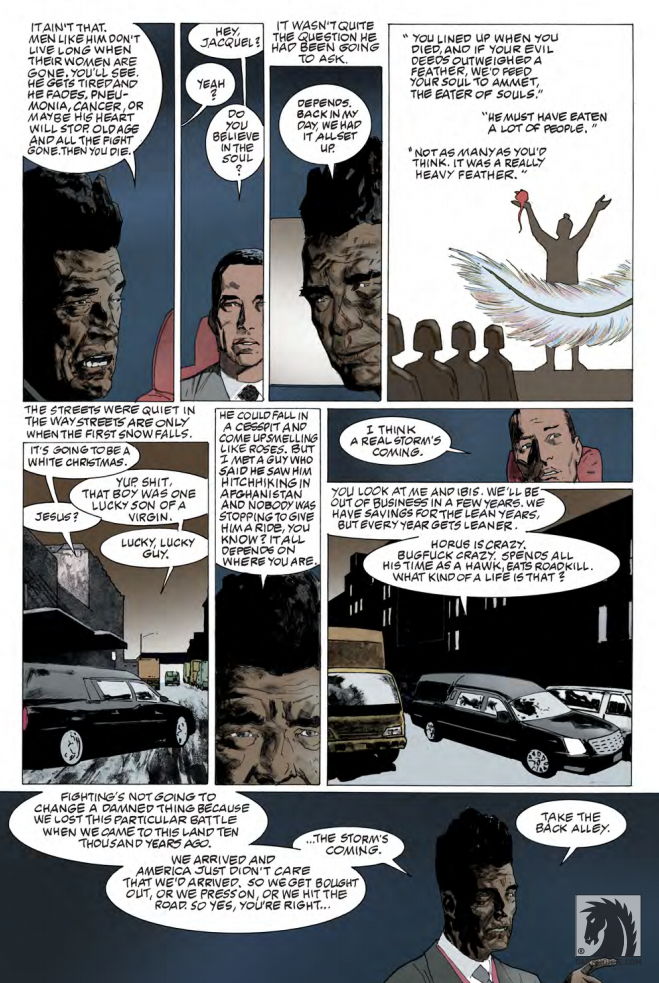 I find Scott Hampton’s art to be quite unique and interesting, as it shifts and changes styles throughout this issue. His art possesses a lovely painted quality, with textured strokes bringing a sense of depth and softness. There is also an interesting scene during Mad Sweeney’s story that looks like an old etching. I like how Hampton heightens Shadow’s detachment and isolation through his detailed and troubled expressions. This combined with the use of heavy shading, gives everything an edgy and gritty quality. The colouring mirrors the bleakness of this issue, with a dark and cool colour palette. It looks cold and wintry, with darker colours dominating most of the scenes. Interestingly, the most colour we see is when Shadow collects the dead body at the beginning, and during her funeral. I also found it effective when the colours become muted during Shadow’s dream sequence. It stands out, and draws attention to what is unfolding, highlighting the fact that something strange and peculiar is happening to him. 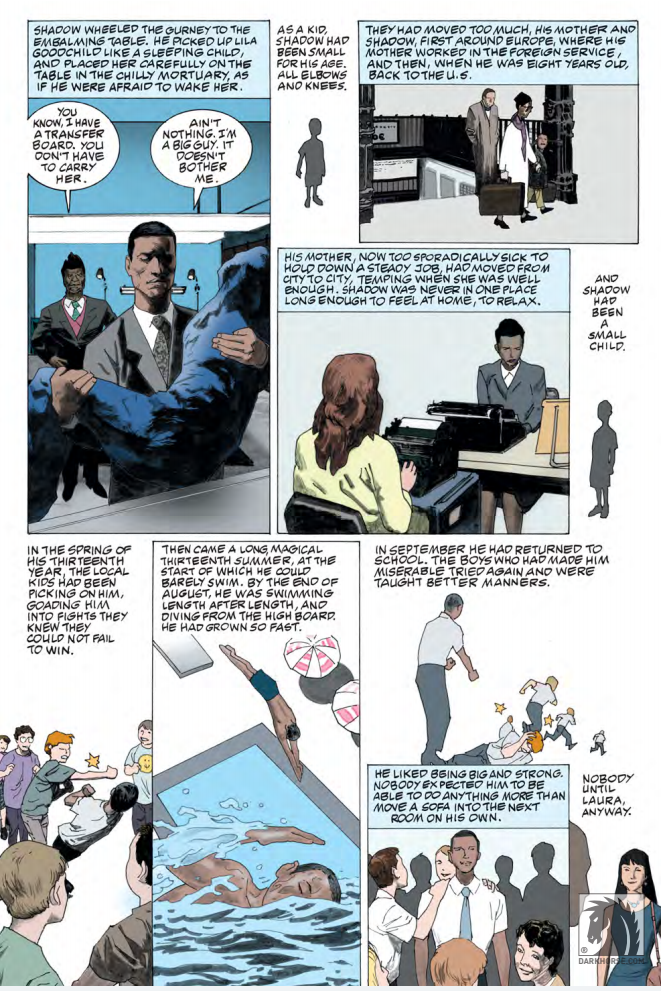 Overall, I found this issue of American Gods to be an engaging and revealing chapter in this tale. There is a feeling of sadness and despair driving the narrative forward, as Mad Sweeney grapples with the reality of his situation, and the desperation that he is feeling. Shadow is experiencing some curious changes in his life, and the unexpected arrival of Wednesday, heralds a new and interesting shift in his journey and the story. I applaud P. Craig Russell and Scott Hampton for handling Neil Gaiman’s narrative in such a delicate way. I know how what happens next and how this story ends, but I’m still looking forward to when the next issue comes out.