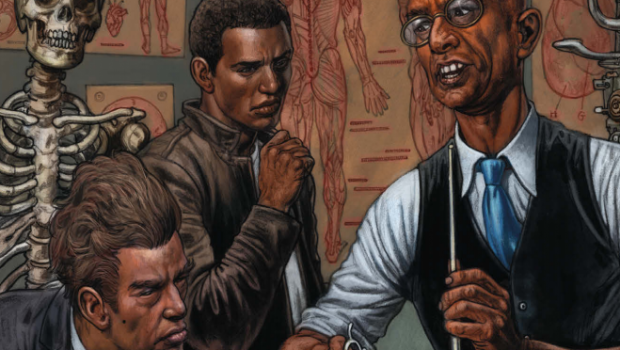 Shadow is finally in the town of Kayro, where he finds himself under the employ of Mr. Ibis and Mr. Jacquel, working as an assistant in a funeral parlour. The past few weeks have started to take their toll on Shadow with the stress and guilt pushing him to breaking point, taking him down a dark and depressing path. 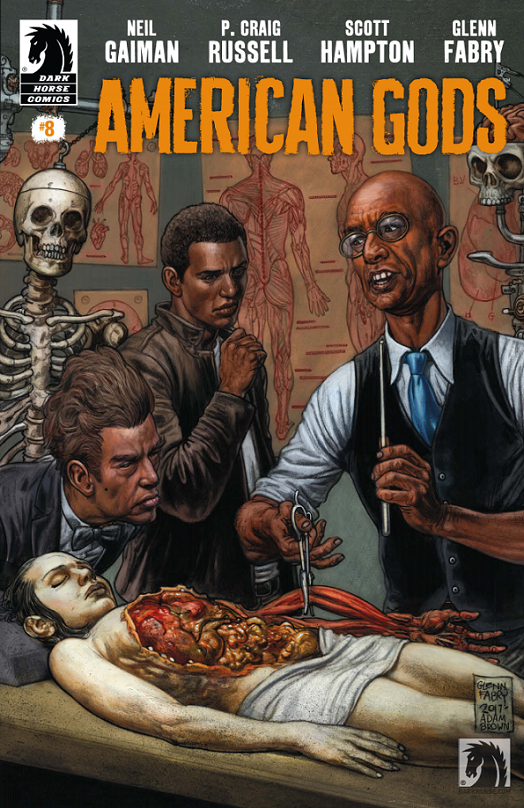 American Gods #8 begins with Shadow and Mr. Ibis having an interesting chat about life, death and funeral parlours over a spot of dinner. After their meal, they leave the restaurant where Ibis talks about how he and his companions came to America thousands of years ago, explaining how people have been coming to America, long before Columbus did. They slowly make their way back to the funeral parlour, where Shadow is offered a room to stay and a job working at the parlour…just so long as he’s not squeamish. They enter the house and head down to the basement, where they are confronted with Mr. Jacquel performing an autopsy on a young woman who was brutally murdered by her boyfriend. Even though the autopsy is confronting to watch, Shadow remains there, where he witnesses a strange ritualistic act that is symbolic of a mark of respect for the dead. After a home-brewed beer, Shadow agrees to work for them with only one condition, that the dead stay dead. Finally, with a roof over his head and a safe place to stay, Shadow reflects on his life, which causes him to breakdown, revealing a tragic glimpse into a tormented man. There is also an additional Comic to America side-story at the end of this issue, by Glenn Fabry and Adam Brown. This tale explores the story of a man called Salim who is from Oman, and the life-changing encounter he has with a Jinn. 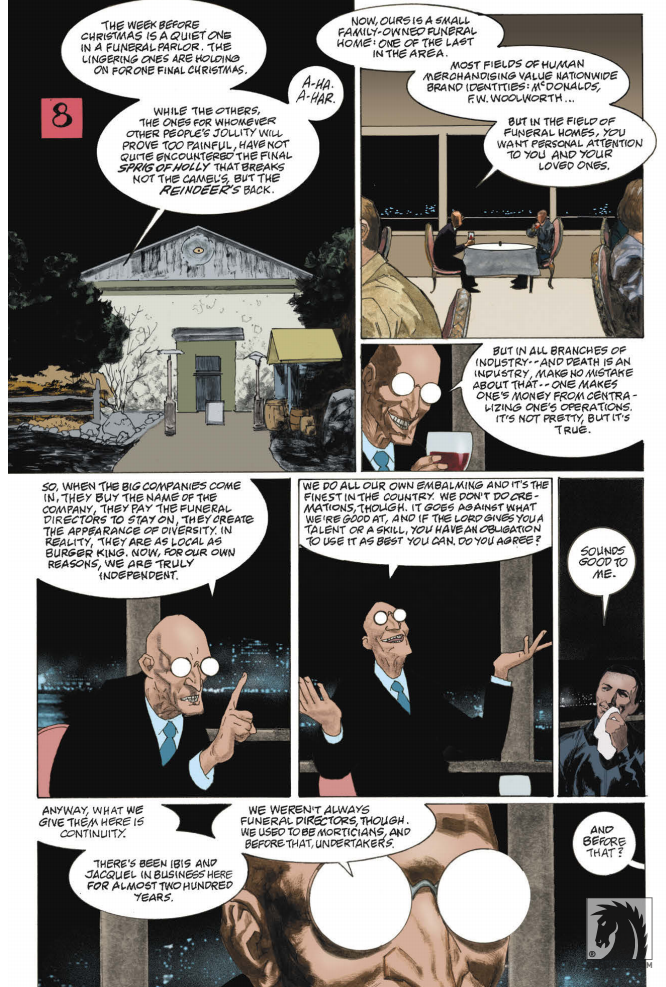 Shadow is finally in Kayro with Mr. Ibis and Mr. Jacquel, where he in welcomed into their strange and confronting line of work. Since coming out of prison, Shadow has been on a non-stop journey across the country with Mr. Wednesday, encountering all manner of weird, wonderful and dangerous gods. On more than one occasion he has been lucky to escape with his life, as the new gods desperately search for him, wishing to probe him for answers about Wednesday’s plans. This issue brings with it, a dramatic change in Shadow’s life and a sudden shift in his emotional state. Underneath, Shadow is a fragile and broken man who has seen too much and is struggling to deal with it all. All of the events over the past few weeks have begun to take their toll on him, and we see an intense moment as a consequence of this.

One of my favourite things about this issue, is the introduction of Ibis and Jacquel, a.k.a. Thoth and Anubis. There seems to be a weird and almost unsettling sense of calm about these two, and I like the interesting new dynamic that they bring. I particularly enjoyed the conversation that Shadow and Ibis have on their way back from the restaurant, where Ibis delves into the history of people coming to America over the years, long before Columbus did. Overall, I find that P. Craig Russell continues to handle Neil Gaiman’s story in a subtle and delicate way, delivering us a narrative that stays true to the original source material. 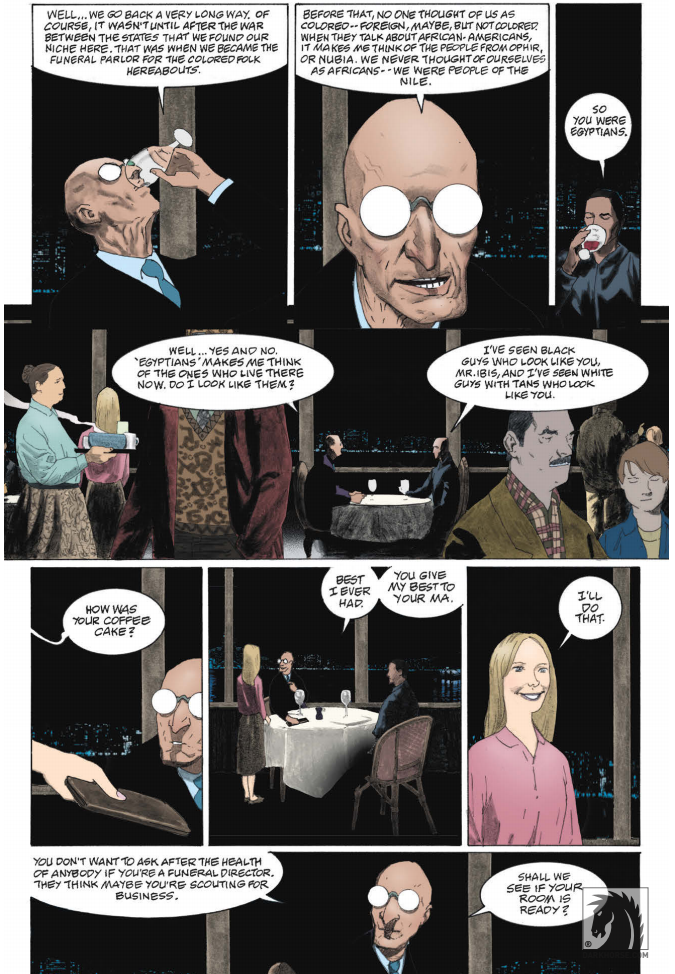 Scott Hampton’s art is dark and atmospheric, framing this chapter in a gloomy and somewhat sinister tone. I really love how Ibis and Jacquel are drawn, almost resembling the animals that they were portrayed as in ancient Egypt. Ibis is thin and frail looking, with a large beak-like nose and elongated neck. His glasses stand out, looking like massive saucers that glow as they catch the light around him. Jacquel is old and noble looking, with a knowing look and piercing eyes. When he takes off his surgical cap, a huge bushy mane is revealed, standing high upon his head, looking like the long ears of Anubis. In this issue we see Shadow struggling to deal with the weight of the stress and pressure he has been subjected to since working with Mr. Wednesday. This all seems to culminate for Shadow when he is alone in the bathroom, which Hampton captures perfectly, reflecting Shadow’s inner turmoil through his troubled and tormented face. I should also mention Glenn Fabry’s art for Coming to America. His art is wonderfully detailed, possessing an intense and engaging energy that works really well with this story. 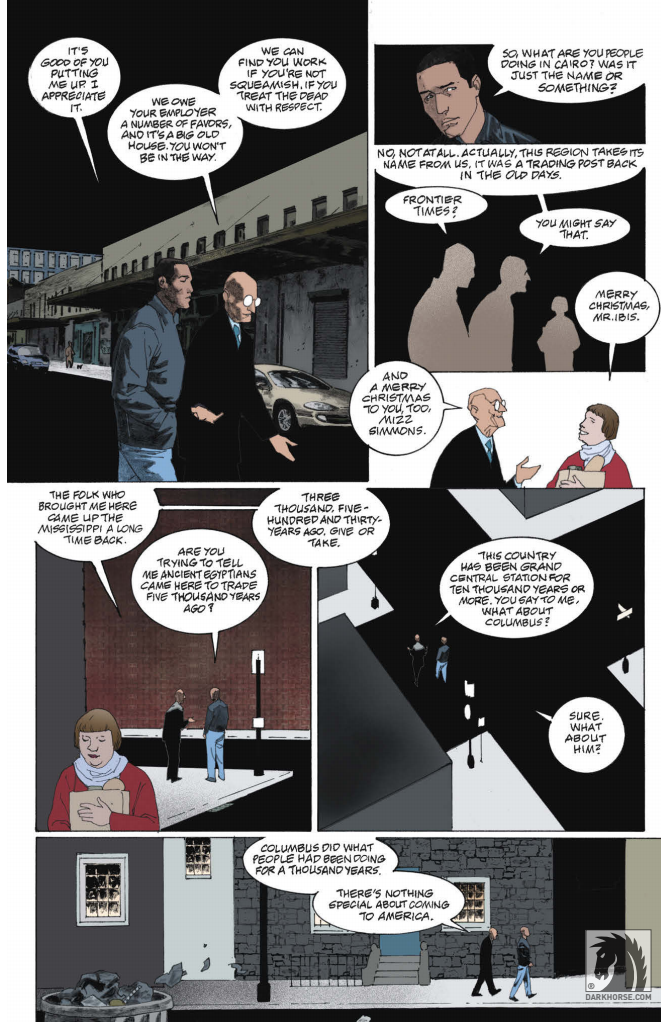 American Gods #8 was an enjoyable and confronting chapter in this story, where we see the introduction of two new curious characters, Mr. Ibis and Mr. Jacquel. A change is occurring within Shadow, heralding a dark and worrying shift in his emotional state. Overall, I found this to be an engaging and compelling issue and I’m looking forward to when the next one comes out.