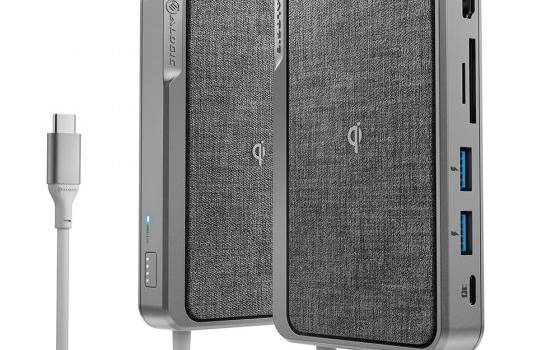 The ALOGIC USB-C Dock Wave is the first of its kind, 3-in-1 solution and the perfect travel companion. It expands on the conventional USB-C dock design by adding wireless charging and a built-in 5,000mAh power bank.

This device is essentially a USB-C dock with two USB 3.0 ports, a card reader and external HDMI video port, with a battery and wireless charger attached. ALOGIC have combined their dock and power bank products into one package.

As a power bank, here are the posted specifications:

Unfortunately, the actual voltage and amperage’s were not clearly posted anywhere on the website, the product or the included leaflet. However the specification output section lists 2 x USB-A (USB 3.0) – Shared 2.4A Charging Output, which suggests that a maximum combined power output of 2.4A.

As a USB-C dock, here are the specifications:

The box itself is quite well presented, an open window gives you a peek inside and the features are listed and easy to read. 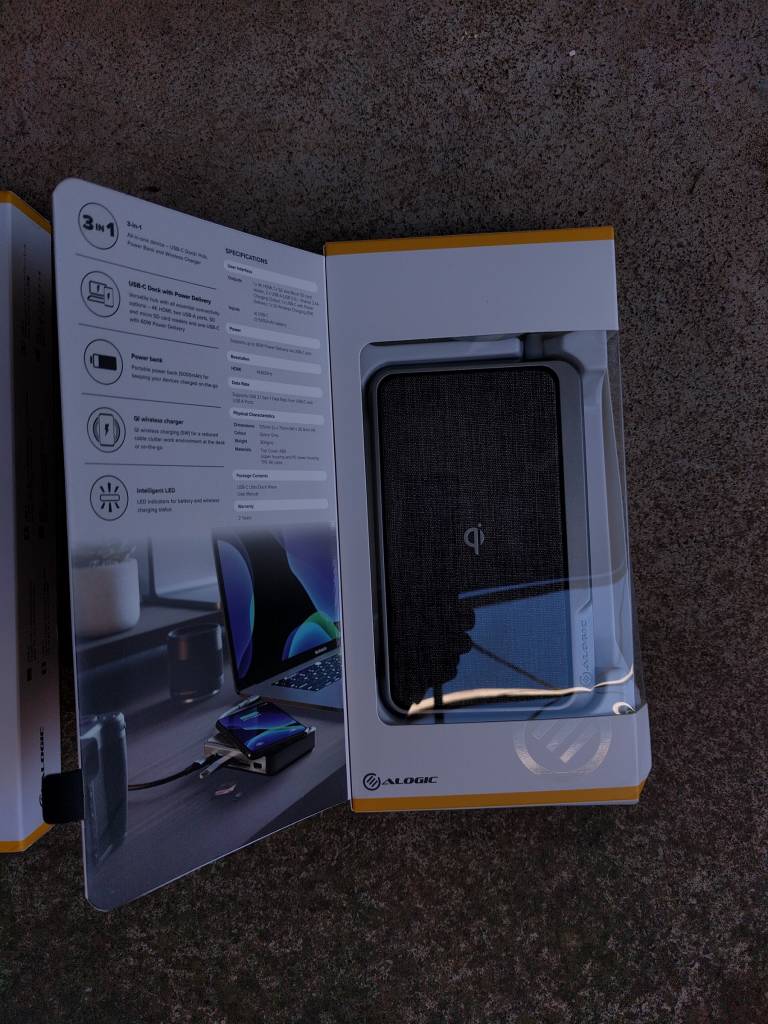 The device was well packed and snug inside its plastic holder, although the box did get crushed in the post, so it is quite possible that the box itself won’t protect the device from damage during rough transport. 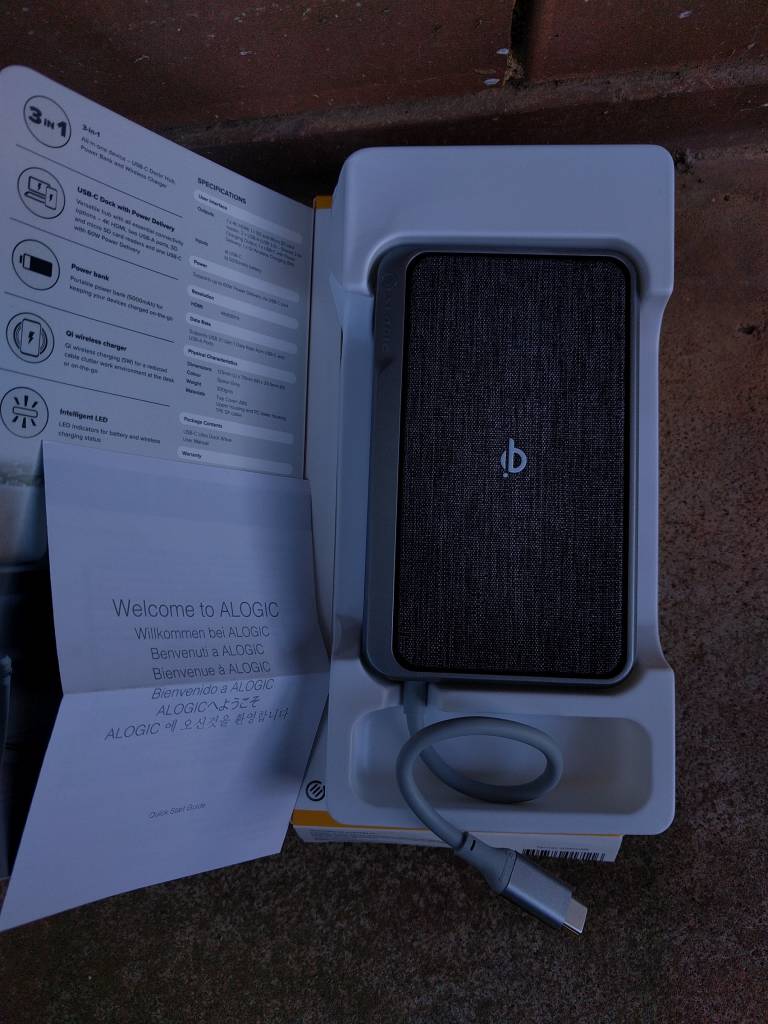 Notice the fixed USB-C cable hanging off the unit.

Sadly, the manual is small, likely difficult for most to read, and very confusing. The language is not at all clear, the requirements to charge the device is not very clear and the average person may have difficulty knowing how to get started with this device.

The weight was the first thing that surprised me. It is not much heavier than some docks that do not contain a power bank (battery), it also fits well in your hand, meaning the span of the device is around the average span of a palm and that is pretty cool.

A professional ‘corporate’ feel comes to mind when looking at the non-slip wireless charging surface with a rubber (perhaps TPU?) feel ALOGIC logo located in the center of the non-slip surface. The idea here makes it feel like its inviting your phone to rest on it.

There is a decent 1mm visible seam between the top and bottom layers, and the unit I received had some pitting and glue residue underneath the USB-A ports and along the seam on the opposite edge with the wireless button and charge indicator.

There are no sharp corners on this device, fully rounded edges and a reasonably smart layout of the ports. The HDMI port is well away from the USB ports, which means there should be less chance of a wide HDMI plug casing getting into the way of the USB ports.

There is however only 5.5mm clearance between USB-A ports, so you won’t likely successfully be plugging in two average USB flash drives in at once. The influencing design factor here has been perhaps more towards fitting the desired portable form factor than the usability as both a dock and power bank. 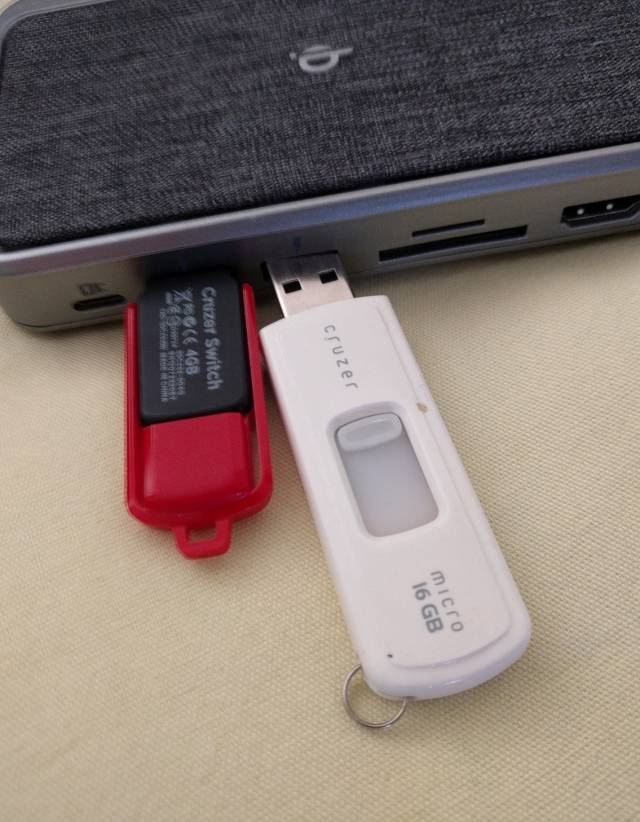 Oops! Guess you will never plug two USB drives in at once!

What struck me the most as weird about this product was the dicky USB-C cable hanging off the end. Obviously this is for connecting to the device, which will control the dock. It was confusing though because it was at first unclear if this was also the charger cable, or compatible to charge the device. A reasonable assumption given there is no included USB-C cable, however further analysis of the manual clears up its usage. It is simply to plug into the device you want to use the dock features with.

At the time of testing this device, I was also putting the ALOGIC 27,000 mAh power bank through its paces. You should also check out that review.

The first tests conducted, were to validate as many of the features as possible. Connecting the dock Wave to my Android phone, I was able to confirm that the phone was able to power the dock features, including the USB ports and I was able to detect the flash drives without a problem.

After the initial confusion of the charging process, I charged the device fully and tested the USB-C and USB-A power outputs. They work as expected and was easily capable of charging the mobile phone (~2,700mAh capacity) twice.

My phone does not support HDMI output or wireless charging which led me on a quest to find devices that I could test with. This turned out more difficult than expected, and after being with a group of 20 people comprising of IT experts, hackers, and enthusiasts, I was able to find a laptop that supported video out via USB-C and confirmed that the HDMI output works flawlessly. In fact it was easily detected and recognised as a video output without any need for driver downloads and fuss. This was great. Sadly though, a 4K monitor was just not available, but it would be reasonable and fair to say that the video output function as tested, works as advertised. 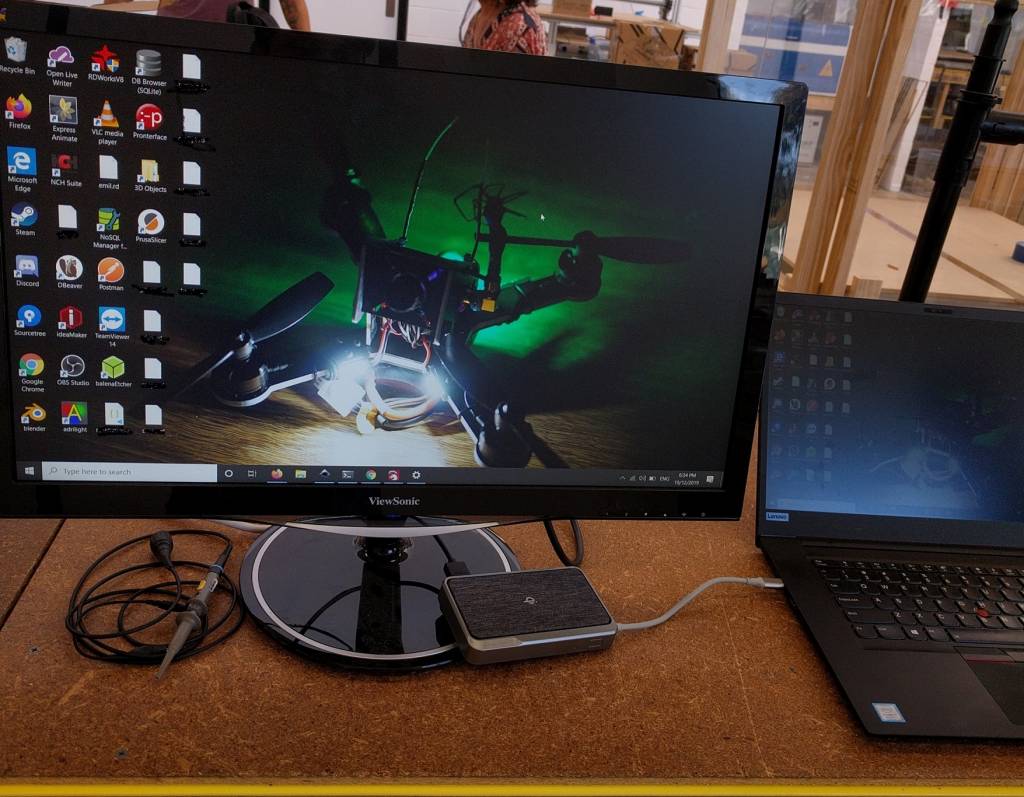 I also confirmed flash drives and SD cards whilst connected to a laptop and they mount as expected and did not experience any jittery dismounts.

As a dock, this device is sound.

How is it as a power bank?

I had access to a UD18 device tester which was invaluable and allowed for measurements of voltage and amperage. This device connects in series with the device you would otherwise directly connect and reads out the consumed power. Obviously with the plugs being so close together, even if two were available, we wouldn’t be able to connect both at once. I was however able to connect a USB device and measure the USB-C draw at the same time, more so to prove that it was capable of outputting power to more than one device at a time. 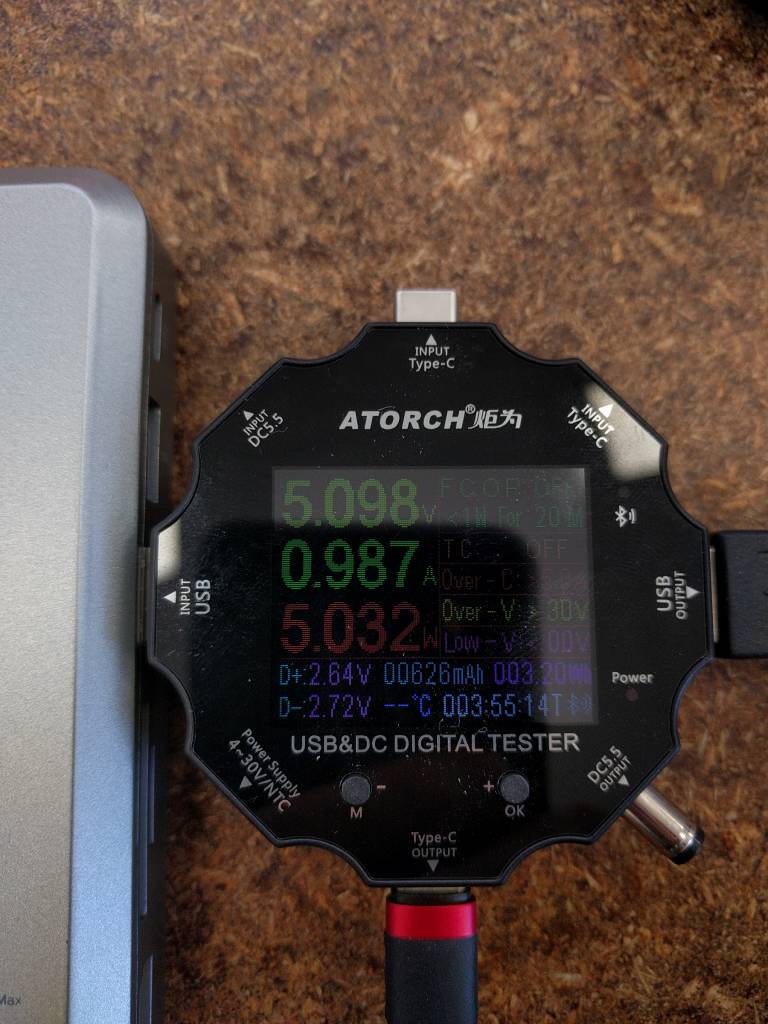 5W of power output from USB A device

The readings were mostly consistent, 5V output at ~0.9A from the USB-A ports. This also came to a 5W calculation on the UD18 (red figure).

The product advertisements state that the Dock Wave supports 60W of power delivery (PD) via the USB-C port. Unfortunately, I didn’t have a USB-C device that was able to output that much power at once. And it’s important to understand the advertising lingo here. The USB-C PD port capable of this 60W is the “USB-C input.” This is a little unclear though, if it’s meant to be the dual USB-C input/output or the dicky USB-C cable that you connect the dock to a device. Keep in mind however, the stated total output of the USB-A and USB-C power is only 12W respectively. 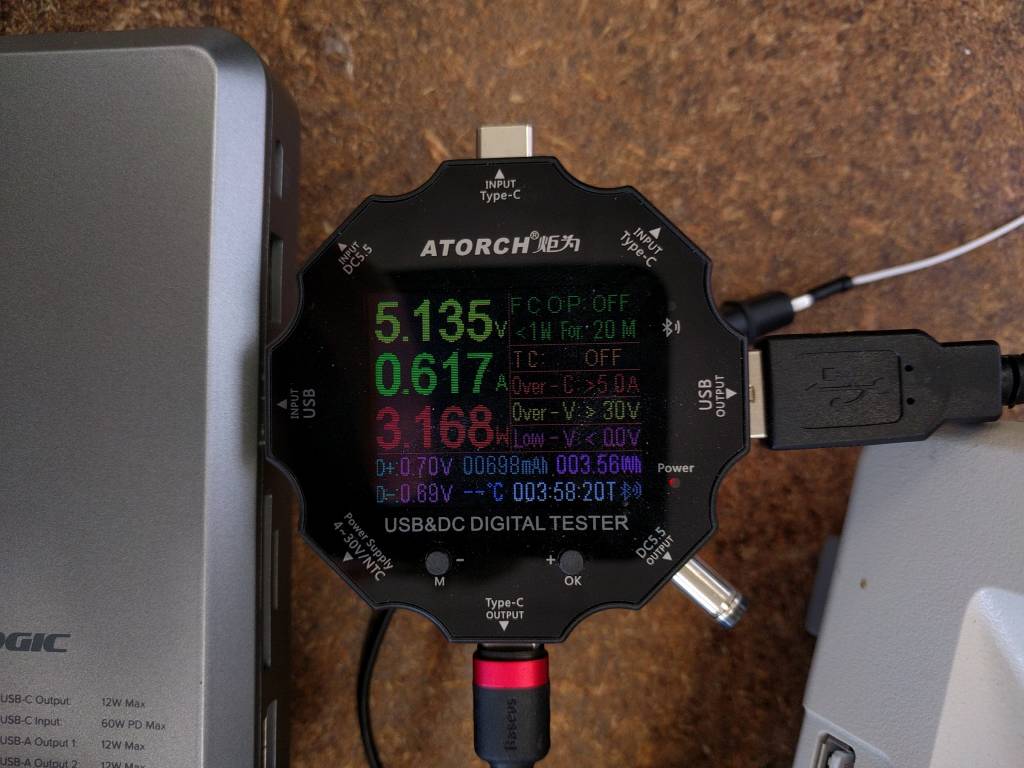 To put this into perspective, using an online Watt to Volts/Amps calculator, 60W equates to 12A at 5V, and smart phones and tablets will adequately fast-charge at 5V 3A. That is to say, that the majority of devices you will be likely to connect to this power bank, will charge as expected.

The device produces a 50Hz sine wave which is present on the power outputs; it is fixed and does not change. There was some small ripple which was no greater than +/-5Hz, but it is relatively steady.

There is what I would deem to be a significant oversight with this product. The dicky USB-C cable is capable of being connected directly to the USB-C input/output port. This in turn activates the power indicator and it would seem that power is being transferred to the dock circuitry from the battery. Without a circuit diagram or taking the device apart, it is difficult to determine what effect this would have, other than draining the battery, but conventional wisdom would suggest that it wouldn’t be good! No pictures of this, so there is no risk of a monkey-see-monkey-do situation.

As a dock, this device is fairly good. All features function as advertised and the main gripe would be that the layout of the ports should be improved in a future revision to allow for better clearance between the ports.

As a power bank, the wireless charger does not seem to be up to task; whether it is due to a fault with this particular dock wave, a design flaw or the power output simply isn’t high enough is not clear. If the output is not high enough, it is likely that older phones and accessories that do not require a high output may work, but if that is the case then that is a feature that most people won’t be able to take advantage of.

The device was able to charge a 2,700 mAh phone twice (for the most part), and as a typical use case, that would be sufficient for most people. As an ‘at a pinch’ phone charger it is pretty good.

The Dock Wave is very much a dock first, a power bank second and a wireless charger last. I state this because of a number of reasons; the dicky fixed USB-C cable that is attached. It detracts from making this a portable power bank that you would want to put in your jacket pocket. It also is a huge oversight that it can be ‘self-connected’. The power bank and the way it is implemented has been designed more so to accommodate the dock by way of its size and dimensions; and it is advertised with displayed Wattage, vs Volts and Amperes as with the Ultimate 27,000 mAh power bank. Finally, the wireless charger component is a lesser add-on, with a power output at 5W, vs the current range of ALOGIC’s separate devices at 10W.

With this being said, the device is very useful as a companion for your laptop or phone. I could see this dock being useful to use with a phone to transfer photos to a flash drive for latter retrieval, whilst also being able to charge the device on occasion as well. It is a good combination device, but serious consideration should be given to this device being preferable to a separate dock and power bank solution.

Summary: A good dock with some quirks. A good power bank, with some room for improvement. A good fit for most people.