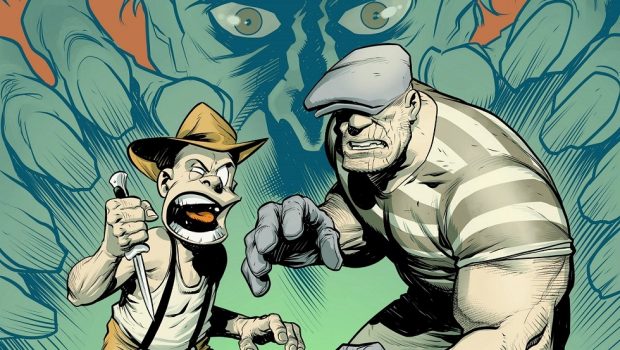 All-New GOON Comic Books To Be Published by Eric Powell and Albatross Funnybooks!

In 2019, award-winning cartoonist Eric Powell and his publishing company Albatross Funnybooks will debut an all new GOON comic book series, featuring never-before-published stories. For almost two decades, the Goon’s whiskey fueled adventures have thrilled fans, critics, and creators with their bold creativity, classic style,and irreverent humor. When Albatross Funnybooks debuts THE GOON #1 next spring, it will mark the first new Goon stories to be published since Dark Horse published THE GOON: ONCE UPON A HARD TIME comics in 2015, and it will kick off a year-long, 20th anniversary celebration featuring a national signing tour, Albatross Funnybooks’ collected editions of classic GOON graphic novels, limited edition GOON tiki mugs and more.

“The fact that we feel confident bringing the full library of my flagship title over to Albatross going into our third year of expansion fills me with excitement and a new enthusiastic energy for what’s to come,” said Powell. “With Albatross, we focus on making fun, eclectic comics that stand out for their individuality and creative quality, as seen in our lineup of titles like HILLBILLY, SPOOK HOUSE, ‘NAMWOLF, GALAKTKON, GRUMBLE and MEGAGHOST. It’s with this idea of keeping the fun in our Funny Books that we are steering this new GOON series. I’m returning to the roots of the series with a heavy emphasis on the weird, twisted humor the book has been known for. The world around us is dark enough right now. I want to make readers laugh and forget their troubles for a little bit. It definitely feels like it’s time for THE GOON.” 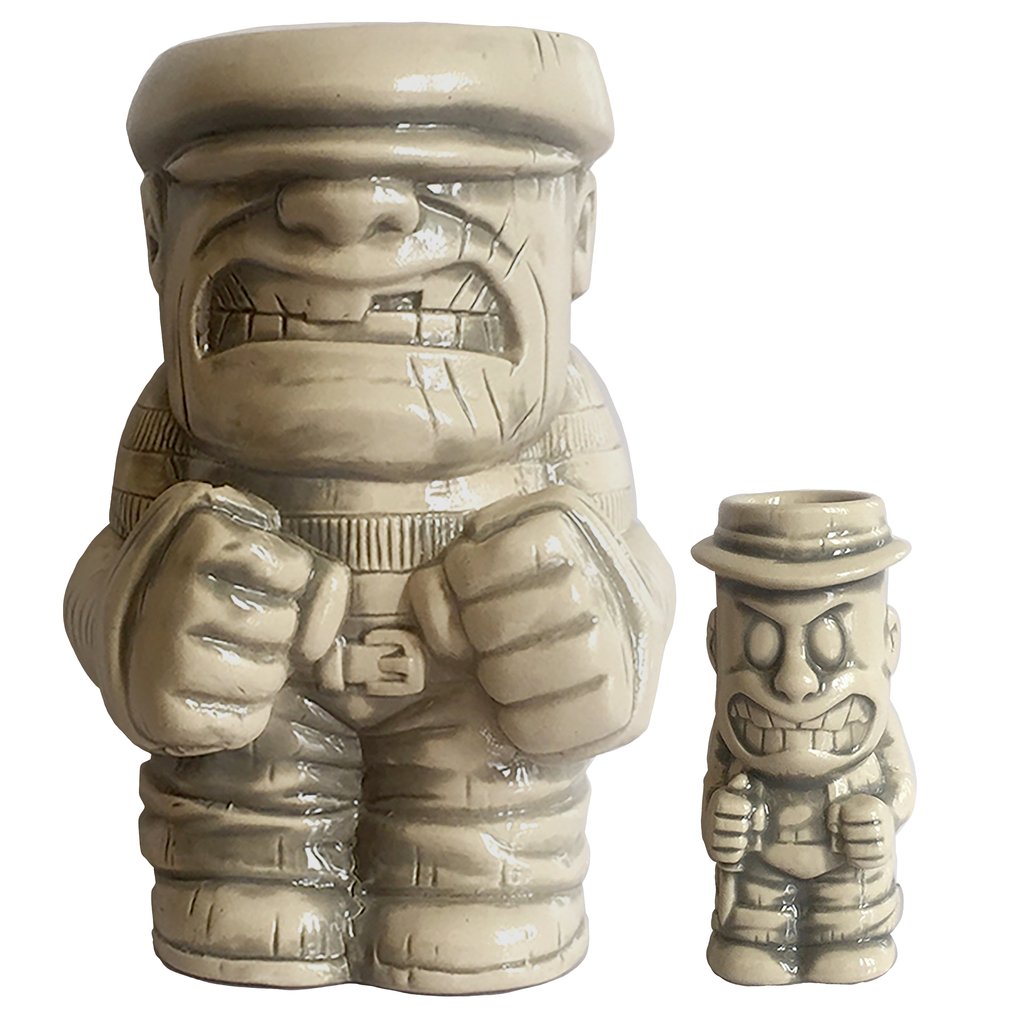 For this new run of stories, Powell will be joined on Albatross Funnybooks’ THE GOON by several acclaimed creators.

“Since I am now not just the creator of THE GOON but also the publisher, I need to make sure our readers get their GOON fix on a regular basis. To that end, we’ll be bringing new creators on to the regular series for first time ever,” teased Powell. “You’ll not only be getting GOON books written and drawn by me, but some written and drawn by some of the best talent in the industry! We will be making announcements in the months to come, but, boy, I can’t wait to show off some of the art we have in the works!!! I think this artist might draw Goon and Franky better than me! And just wait until you hear who’s writing a script for me to draw! It’s one of the best daggum creators in the business, ya’ll!” 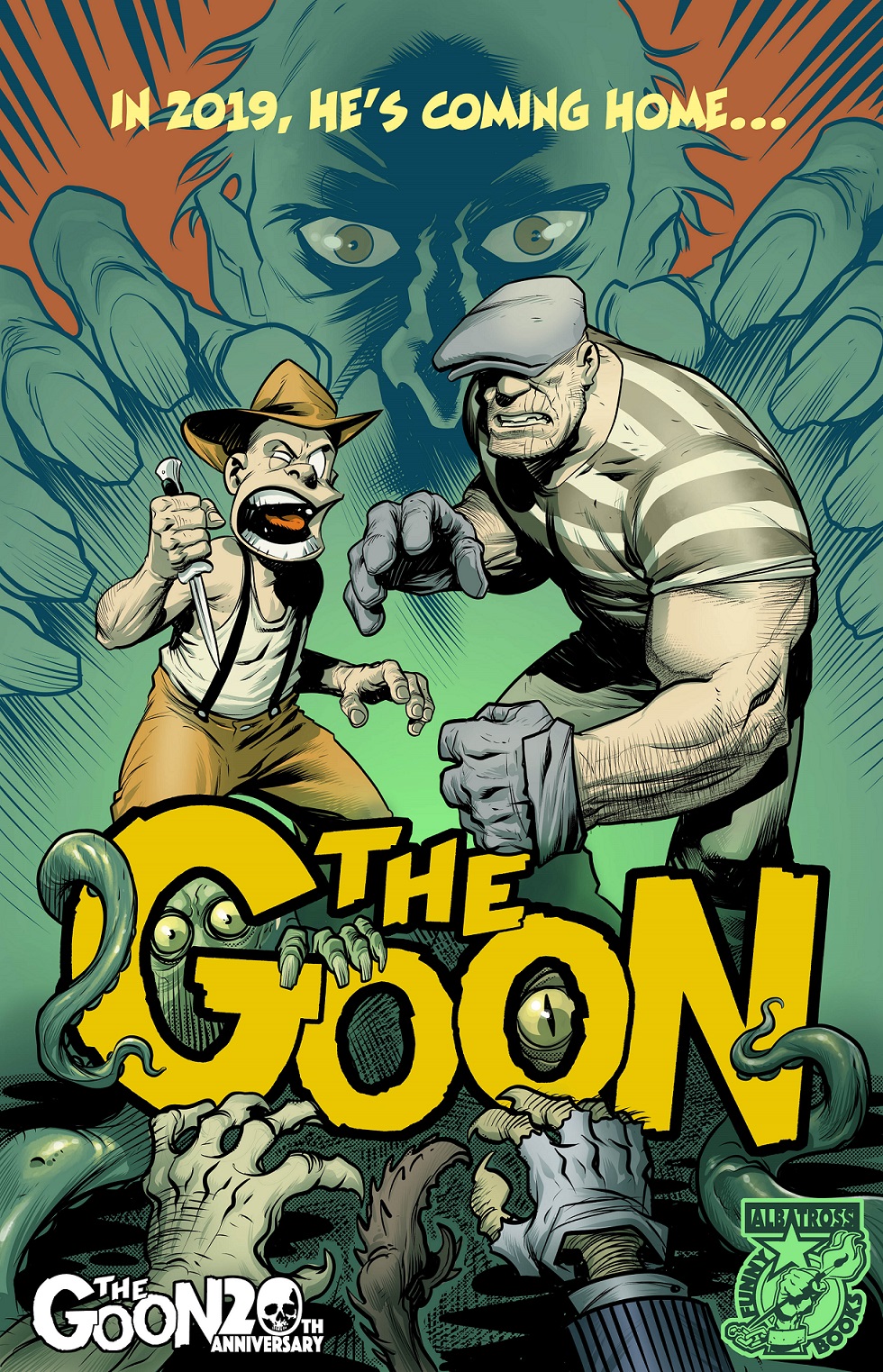 PRAISE FOR THE GOON

“A true American original—a delirious medley of strange characters, stranger creatures, wild-ass (and often truly creepy) storytelling, art so excellent and perfectly matched to the tone of his stories as to be flabbergasting, and writing so hilarious that it sometimes comes close to making me pee my pants.”—Frank Darabont, director

“The product of a contentedly demented mind.”—Comic Book Resources

“The Goon has earned [Powell] a seat at the table with Kirby, Eisner, Chester Gould, Hal Foster and Al Feldstein.”—Joe Hill (Locke & Key)

“Eric Powell’s great series The Goon deftly combines lowbrow humor with unexpected emotional depth in its ongoing story of a big, not-so-dumb guy who does battle with zombies in a town seemingly dreamt up by Tom Waits.”—The A.V. Club

“Eric Powell has created a sharp, witty little monster comic with a very interesting mystery at its heart. And Eric can draw as well as anyone in the business. When zombies are overrunning the city, there’s only one man tough enough to keep the undead in line: Eric Powell’s THE GOON.”—Jeff Smith (creator of Bone)

“Every panel [is] gorgeously detailed, like a Max Fleischer cartoon if Cthulhu spat some sort of hellish bile all over it.”—IGN

“There’s a certain joy knowing that a cartoonist of great skill is filling his or her own comic with the elements they love . . . The appeal is how Powell conveys that enthusiasm by drawing every creature and monster so darned well.”—Publishers Weekly

“If this is your first time [reading The Goon], you are in for a treat—if not, you already know how lucky you are.”—David Fincher, director

“A comic for readers who like a generous helping of comedy with their hordes of zombies.”—New York Daily News

“Comicdom’s new hero is a fighting machine with a curious affinity for kicking serious ghoul butt. We hear the Hulk’s green with envy.”—Entertainment Weekly