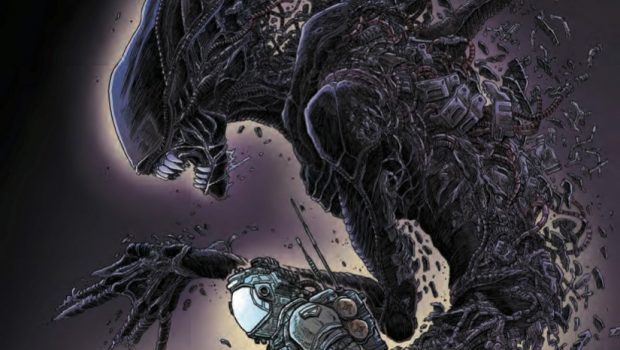 Summary: This is an engaging first issue that lays the foundations for a chilling and menacing story.

This is one alien that has gone down in history as being one of the most heinous, terrifying and downright fear-inducing monsters to have ever been conceived. Playing cat and mouse with a xenomorph is the stuff of nightmares and I can’t wait to see this baby in action! 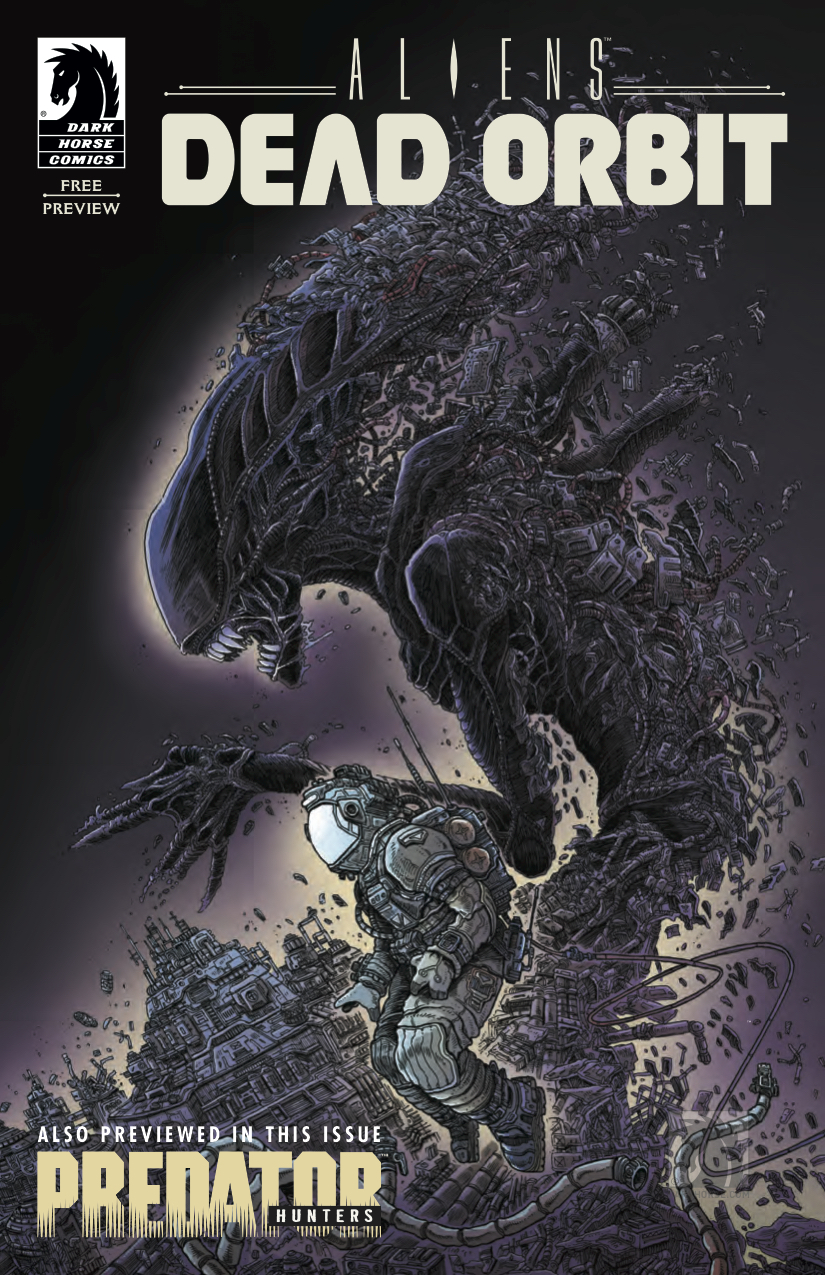 We begin this story on an isolated space station, Atol Sphacteria, orbiting the planet, Pylos in the deep wilderness of space. Something catastrophic has happened, as parts of the station are destroyed with debris floating through space. An engineering officer by the name of Wascylewski, a.k.a. Wassy is abruptly awoken by a threshold breach. Looking exhausted, stressed and having smoked his last cigarette, he suits up and goes to investigate the breach. Whilst out in space, he catches sight of another ship which triggers a flashback and thus begins the chilling tale. It is through these flashbacks that we begin to piece together the puzzle and learn what exactly happened. The crew of the space station find an unmarked ship which they are trying to contact but nobody is answering. The crew decide to investigate and check out the situation, only to discover that the ship is in a state of disrepair with all the signs that something horrific has occurred. From my experience of this genre, coming across an isolated, half destroyed ship, aimlessly floating through space has never really ended well for anyone. This can only mean bad news, and bad news it what they get! 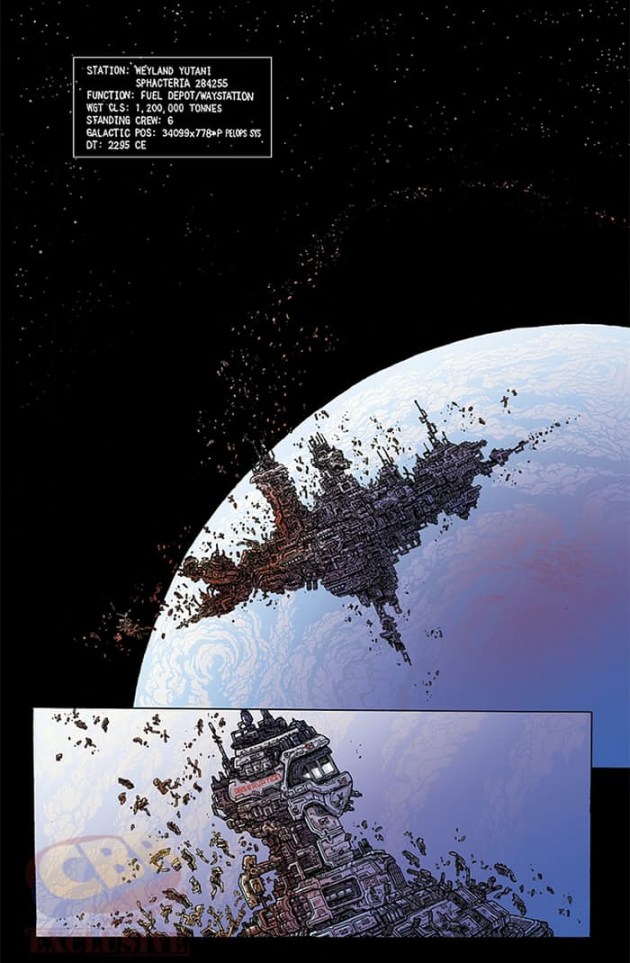 James Stokoe both writes and pens this intense and gritty space thriller. This is an engaging first issue that lays the foundations for a chilling and menacing story. Whilst the basic plot is not entirely original, Stokoe manages to create an engaging story through detailed visuals and minimal dialogue. Something bad has clearly happened, however we don’t know all the details. We can piece it together but the sense of ambiguity is interesting and heightens the overall feeling of unease and apprehension. Pacing is always one of the most vital elements of a good horror, especially when trying to establish the atmosphere from an early point in the story. Stokoe achieves this through revealing the events to us through a disjointed narrative that we have to piece together.

For anyone familiar with the Aliens Universe, they will know that a xenomorph would have to be one of the most terrifying creatures to have to be trapped on a small ship with. This is a vicious killing machine, who is somewhat elusive and calculating in the way that it hunts it’s prey. This alone gets me excited for what Stokoe has planned for this series and seeing how he can make this story original and unique from the others. I look forward to revisiting this monster, where I get to explore my fear, love and obsession with it. 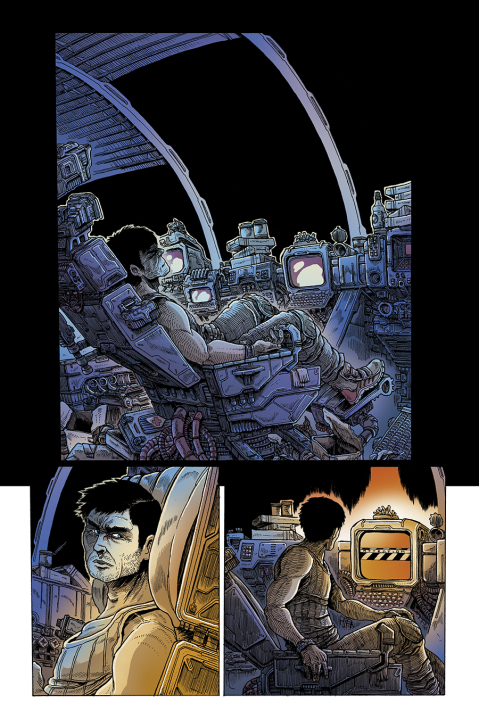 The art is incredibly detailed and effective in revealing the claustrophobic quality of this space station. This is a visual story, relying more on the art to drive the narrative, rather than lengthy dialogues and detailed text explaining lore. This is already an established world that is firmly grounded in the designs and visual aesthetics of H.R. Giger, therefore requiring Stokoe to adopt the biomechanical details that are iconic with this series. He does do this, but in his own unique style which has a layered and nightmarish quality that is distinctively his own. The colours help to heighten the overall edgy atmosphere prevalent throughout the entire issue, with everything bathed in cool tones and vibrant pops of colour used to draw your eye to specific details. 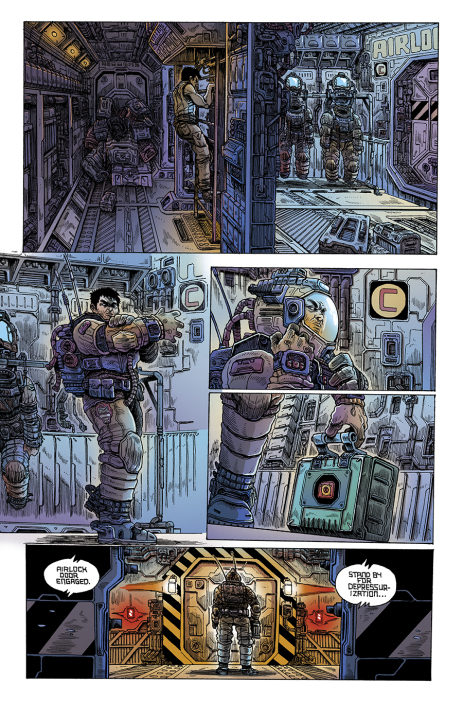 Overall, I’ve enjoyed the first issue of Dead Orbit and I look forward to watching this intense game of cat and mouse unfold. I love nothing more than being immersed in a scary, adrenaline-fueled space horror, especially one that involves a xenomorph. I just hope that this story maintains its chilling momentum and offers us something that we haven’t encountered from this nasty creature yet.