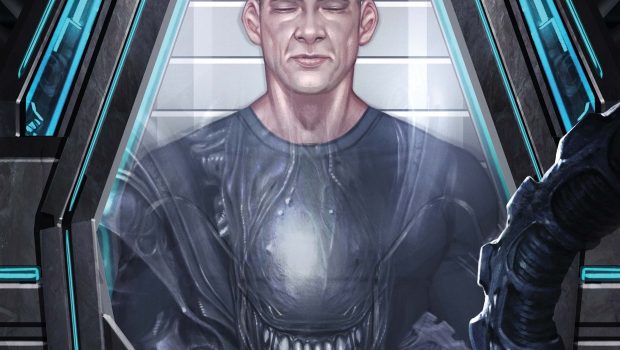 Summary: Gabriel Cruz is thrust back into the fold in a fantastic part two of Marvel's Alien take

We Call them Xenomorphs

If #1 of Marvel’s Alien run whet your appetite, then this issue will leave you positively salivating. After a grievous betrayal, recently retired Gabriel Cruz is forced to return to the alien-infested Epsilon Station to secure a Xenomorph sample, as well as rescue his missing son Danny.

We’re not quite in the thick of it just yet, but Marvel are ramping up the tension in their Alien run. There’s a sense of dread that pulsates from each page, an intense foreboding as Cruz leads his companions into the fold. I especially enjoyed the interaction between Gabriel and his two new crew mates, and it certainly doesn’t pull any punches in reminding us how much of a threat the Xenomorphs can be.

Epsilon Station has all the hallmarks of a great setting for the franchise – plenty of sketchy Weyland-Yutani experimentation, all contained (at least for now) in the typical dark and bloodied corridors you’ve come to expect from the universe. It’s perfect for the claustrophobic cat and mouse Warfare we’re bound to experience in the coming issues. I’m still not convinced the character design fully works, but tonally it’s spot on, with some fabulous inking throughout.

I’m genuinely excited to see where we’re going with this series. Alien deserves a great comic run, and so far, this is ticking all the boxes.