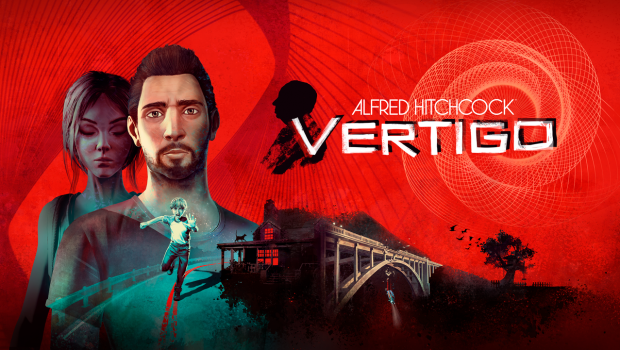 It wouldn’t be a Hitchcock story, without intense themes of murder, suicide, scandal, mystery and wonder. Vertigo brings it all, in classic Hitchock style, and it odes not disappoint.

Before you read on, this review may touch on some aspects of the story that you may not want to know about until after playing, so if you don’t want spoilers, then stop reading now.

Vertigo follows the life story of Ed Miller, a writer who has suffered the traumatic loss of his parents when he was a child. Ed experiences a reawakening of his trauma which lead him to repress his memories and regress emotionally to a child state, manifesting itself as a psychosomatic condition of vertigo.

Ed, now bed ridden, suffering from vertigo and having to recount his recent suspicious involvement in a recent car accident and suicide attempt with the eminent psychiatrist and psychologist Dr Julia Lomas, is at first, combative and unrelenting in his refusal to cooperate with Lomas. Through intense therapy, involving hypnosis, Dr Lomas is able to help Ed through his regressed memories to get to the root cause of his trauma. 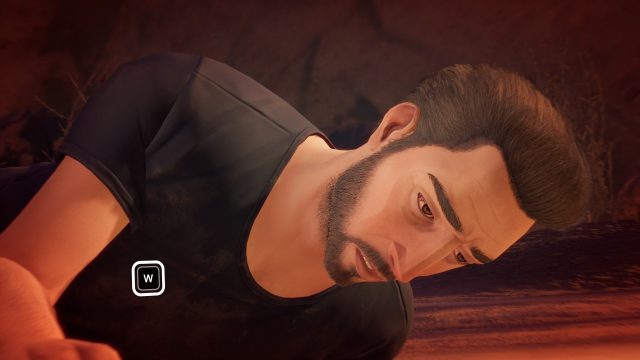 Intersected with Ed’s trauma and the events leading up to it, are a real life criminal investigation of murder and missing persons, including a baby. The intersecting connections and the case all unfold in Ed’s past and in the world around Ed and Dr Lomas.

The player will play from the perspective of several characters at different points in the game, unlocking different aspects of the stories and as part of the therapy sessions, which constitutes the finalisation of each part of the story, Dr Lomas must write her session notes, which involve player decisions that directly influence the outcome and dialog. 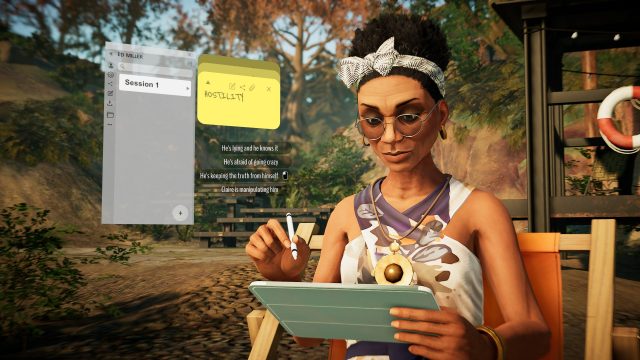 The player character will be moved by WASD keeps with mouse pointer objects being clickable. There are also action controls that involve the use of the keyboard or the mouse. During playthrough of the advanced beta release, there were some clunky control movements and inconsistency between mouse and keyboard actions (see photos), but these do not affect the game in any serious adverse way. 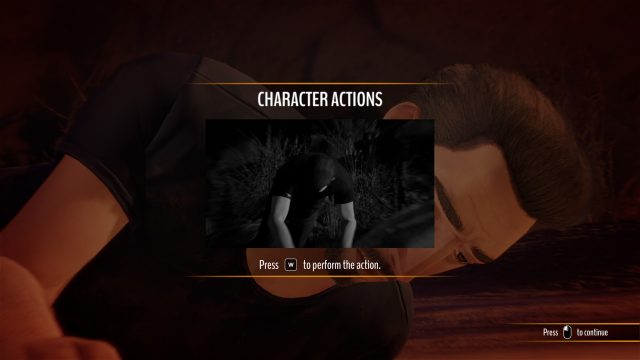 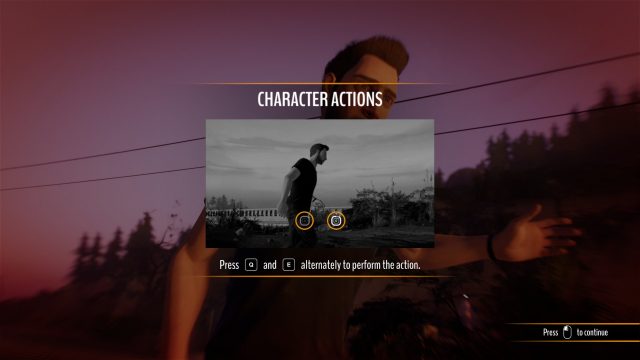 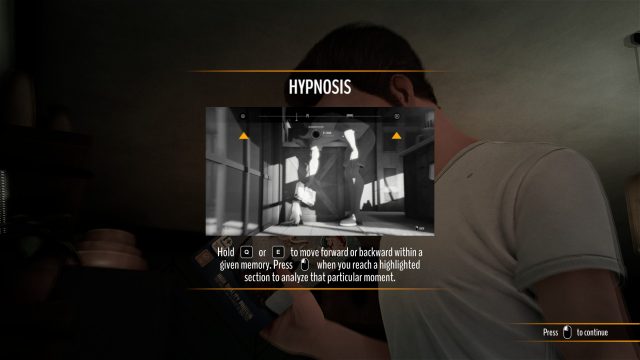 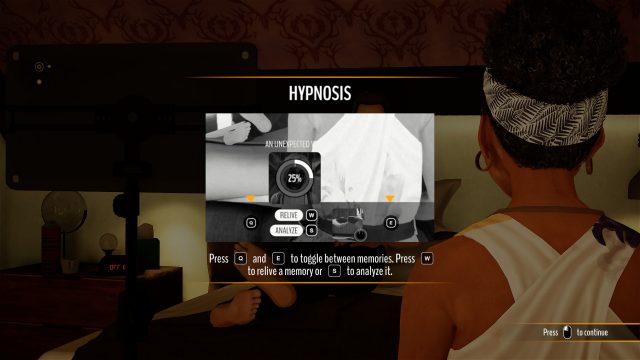 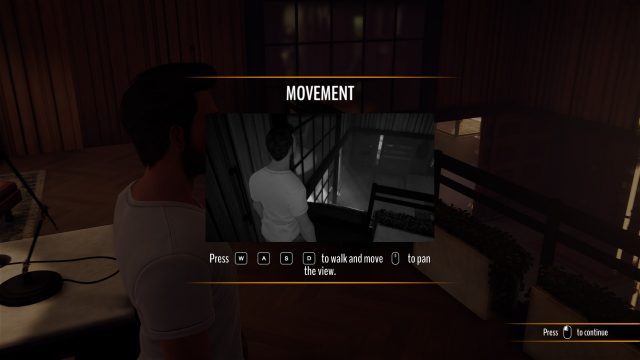 Although these control actions break up what would otherwise be an interactive movie, they do feel very gimmicky and would be more at home on a tablet game than a PC.

During Ed’s hypnosis sessions, memories become available as a play through and an analysis that is very similar to Cyberpunks braindance sessions; instead Dr Lomas will be prompted to ask questions based on aspects and objects within Ed’s memories, which reveals part of the main story and Ed’s backstory. 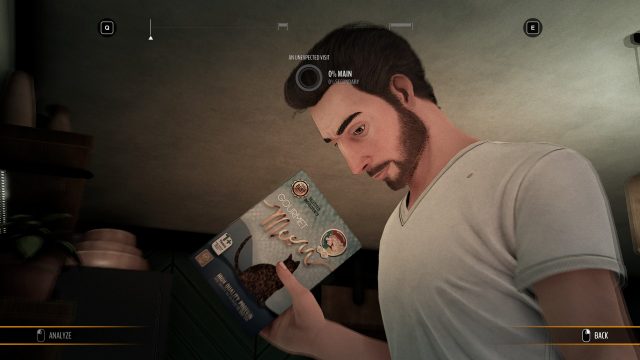 Q and E to scroll forwards and back in a memory. The percentage indicator shows how much investigation is necessary.

Throughout the game, there are the typical tutorial components and prompts to assist the player. The gameplay focuses solely on telling the story, and as such the player can play this game (for the most part) at their own pace and would also be suitable for individuals with limited mobility.

The graphics in Vertigo are interesting, as there is noticeable difference between the character and dynamic animation and the static scenery.

The static scenery of the house and other locations are highly detailed and very immersive. The developers have created a full and rich world that gives life to the characters and informs the unspoken nuances of Ed and his life. That said, is it a French thing to have books in the bathroom? 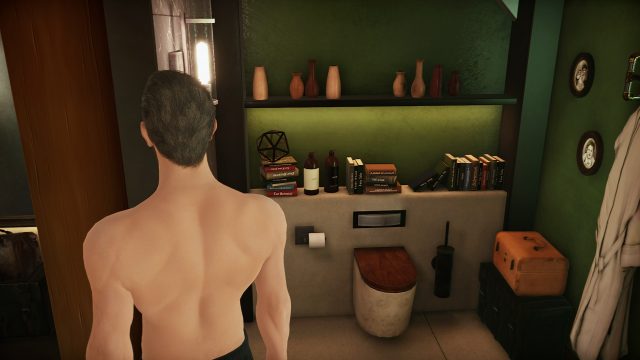 Is it a French thing to have books near your toilet? Both bathrooms seem to serve as libraries. 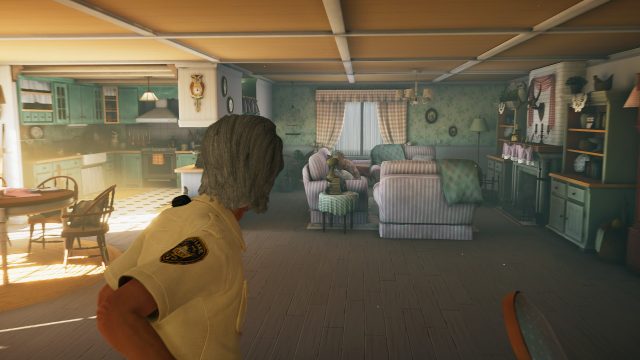 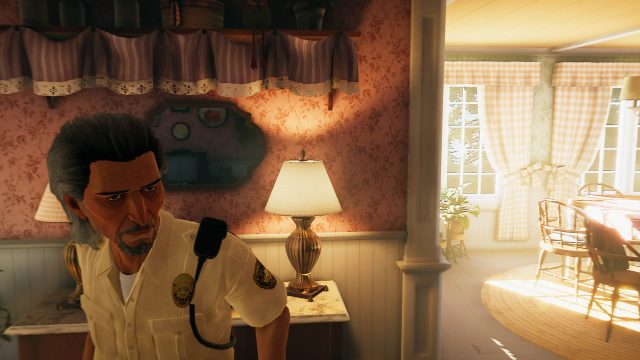 Amazing details in different scenes. The texture and trim of the lamp and shade, or folds of the lace on the curtains. Absolutely stunning.

When it comes to character animation, the quality does sadly dip quite a bit. The style of animation does appear to be a bit dated, although there is nothing wrong with the style as such, however in this playthrough there were a lot of jarring facial expressions where the character randomly opens their mouth beyond the normal distance, reminiscent of the ‘scream’ face. 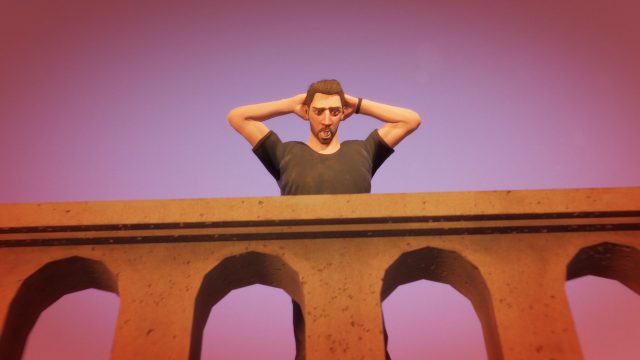 The elongated jaw opening of Ed was the most notable. But this extended-jaw look was present during a yawn, and on Dr Lomas face when showing surprise. Very difficult to capture as a screenshot however.

Oddly enough, this random mouth opening sometimes added to the dramatic tone and fear elements, but for the most part, just seemed off-putting and comical. It was also accompanied with random rapid eye movements that also did not seem to be right. If you were pressed to explain the overall look and feel, there is one animation that comes to mind that is hauntingly similar.

Hopefully the developers will fix some of these animations for the release. With most of these issues appearing towards the first half of the game, it is a good sign that this can be addressed.

The English voice acting is absolutely superb. Especially the young Ed, which is perhaps the most memorable and emotionally captivating voice of the entire game.

Dr Lomas voice resonates a strong sense of professional confidence and years of experience as a therapist, which was quite unexpected, especially after the first two acts.

The developers have seriously nailed the sound in all aspects, especially ambient sounds, such as wind, and the meow of the cat. Ambient sounds are not too busy nor is the background music, which is a perfect compliment of emotion that helps tell the story. This is one of those games where you actually want to leave the music on, which is always a good sign.

Vertigo as a story, has all the twists and turns that you may expect. But it must be said that the elements of this game is not the feint of heart, or the weak of temperament. You will actually play out scenes of self-harm and psychotic behaviour, which some people can and perhaps will find disturbing.

The graphics are not so disturbing such as <Still Life> or horrific scenes of blood and gore, but the emotional resonance of these matters should not be underestimated, as for some this may seem to be in poor taste. It is however not beyond the pale, nor is it outside the realm of what has been done before in a general sense; and it would be reasonable to say that on balance, this has been approached with respect and in good taste that tells a story, vs garish shock value.

The story is really great and depending on the choices made in the game, could actually be a good ending vs a very tragic one.

The detracting element unfortunately is the subpar character animation which devalues the story and game presentation and cheapens it somewhat. Vertigo otherwise had the potential to be far better than it currently is, but nevertheless, this game and it’s story is seriously worth a play. 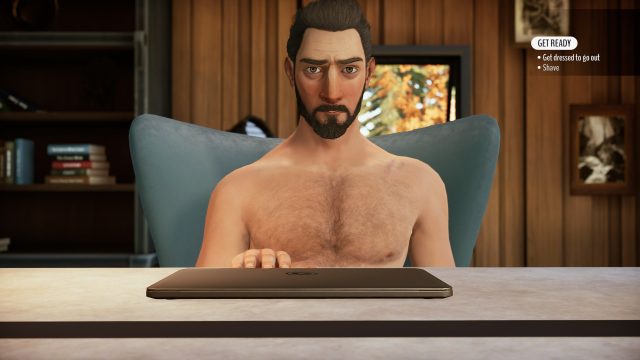 Ed spends most of this time with a shirt off. Also, good advice. Shave and get dressed!

Summary: Vertigo offers a thrilling and captivating playable story that touches on some very serious themes. Not for the feint hearted or weak in temperament.