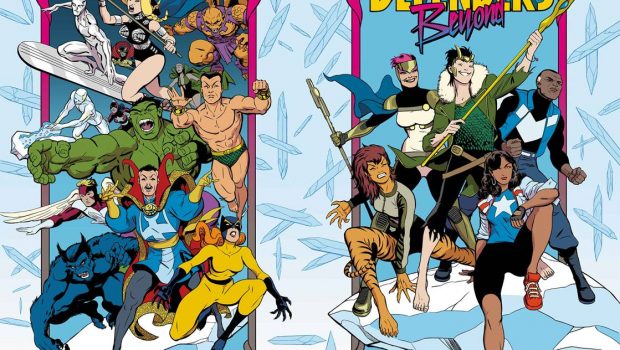 AL EWING AND JAVIER RODRÍGUEZ REUNITE FOR MORE COSMIC MADNESS IN DEFENDERS: BEYOND! 8:03 AM

Writer Al Ewing and artist Javier Rodríguez will follow up their acclaimed work on last year’s DEFENDERS: THERE ARE NO RULES with a new volume starting in June. Titled DEFENDERS: BEYOND, the mind-bending saga will feature a brand-new lineup who unite to tackle an adversary with the power to end reality as we know it. Seen in yesterday’s teasers, fans will instantly recognize this legendary being who comes from BEYOND. But as the previous DEFENDERS series proved, nothing is ever as it seems when Ewing and Rodríguez dive deep into the Marvel cosmos… Readers can expect these comic book masterminds to once again flip core Marvel concepts inside out and along the way, introduce bold additions to the Marvel cosmic pantheon, reveal shocking destinies for the Defenders and other Marvel heroes, and discover what secrets lie at the very foundation of the Marvel Universe.

It all kicks off when Doctor Strange sends a dire warning from beyond the grave! Blue Marvel, America Chavez, Taaia (the mother of Galactus), Tigra, and Loki (a variant of the God of Mischief who should be familiar to readers of Ewing’s LOKI: AGENT OF ASGARD series) will have assemble to defend reality itself! Their mission will take them to the very limits of space and time (and beyond it) as they confront questions few heroes have dared to ask and receive answers no one in the Marvel Universe is prepared for…

“It’s great to be co-storytelling with Javier again on another DEFENDERS book – he’s more than an artist, he’s the other half of the equation,” Ewing said. “There’s no DEFENDERS without him. And of course, we had to go even bigger – so in this book, we’re going on a magical journey into the Mystery itself, mapping the Marvel Godhead and bringing back knowledge that ties into what has gone before, some seismic things to come… and if we’re lucky, maybe a little off-the-page magic to feed your hungry head. We’ve got an eclectic new crew of Defenders chosen for the task by the final spell of Stephen Strange – I’m saying what’s probably a final goodbye to a lot of stuff from the past ten years with this one, and for at least one character, this will be the last adventure. Hope you survive the psychedelic experience, pilgrim!”

“Al Ewing is like a wizard that opens doors to the greatest ‘larger than life’ stories you could imagine,” Rodríguez said. “He could take you through the most cosmic and spectacular passages of the Marvel Universe. And at the same time, he cares about each of the characters on the team, their lives, their particular problems so that you worry about them. And I have a lot of fun translating that to images. Those are the reasons that I’m so happy to get back to THE DEFENDERS.”