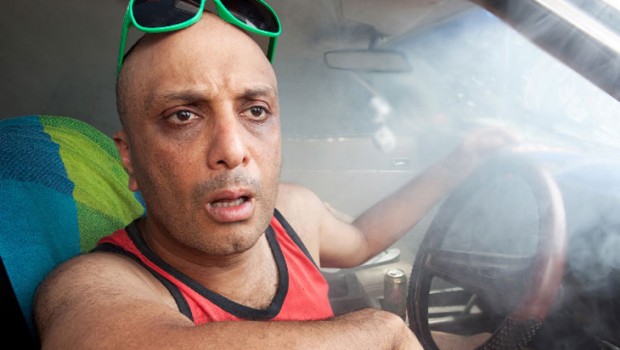 Summary: So watch out Melbourne because Akmal Saleh is back and he's bigger and better!

The hilarious comedian Akmal Saleh returns to the Melbourne International Comedy Festival for another jam packed stand-up show who talks about growing up as an Egyptian/Australian in Punchbowl, how strange society can sometimes be, bad TV choices, baldness and also Tony Abbott who became prime minister because he promised to turn back the boats with Akmal eloquently stating that if only the Aboriginal people knew this 200 years ago.

So Akmal’s humour is a mixture of the political incorrectness, saying it how it is with some choice swear words and his very amusing one-off impersonation voice that sounds better when he is trying to mimic a Bogan from Frankston. Akmal also targets audience members, especially those  arriving late or those trying to sneak out during his show that had the audience in stitches, especially when one man almost fell over climbing up the stairs to get to his seat.

Akmal’s performance is full of energy and this energy is successfully relayed back to the audience as he swears, let’s the joke fly and even throws some water at the audience to help cool them down. Akmal even mentions his parents who wanted him to be a doctor like his brothers with his mother stating that if he stayed at Telstra, he would be manager now.

He then moves onto some of the poor TV choices he made such as appearing on Q&A with his brain trying to get Akmal to say something funny to being on the SBS show, Selling Houses Australia when he and his wife purchased a house in a rain forest in NSW overrun by bush rats and leeches that highlighted his poor housing purchase, noting that whenever they get money, they want to spend it all like children.

Akmal also slides in some jokes about racism like one person in the street telling him to go back to where he came from to which he replies, Punchbowl? Akmal even discloses that growing up, his entire house was filled with pictures of Jesus Christ and when he asked  his mother why this is so, she replied to keep the devil out which led to him to do a very colourful impersonation of the devil. Another highlight of this performance is that Akmal is quite the good adlibber and really bounces off the audience which makes his humour really flow.

Akmal Saleh successfully ticks off another comedy filled show at the Melbourne International Comedy Festival for 2015 that had the audience in hysterics and at times crying as he talks about almost everything and anything (even a rusty blender) with political correctness thrown out the window. So watch out Melbourne because Akmal Saleh is back and he’s bigger and better!