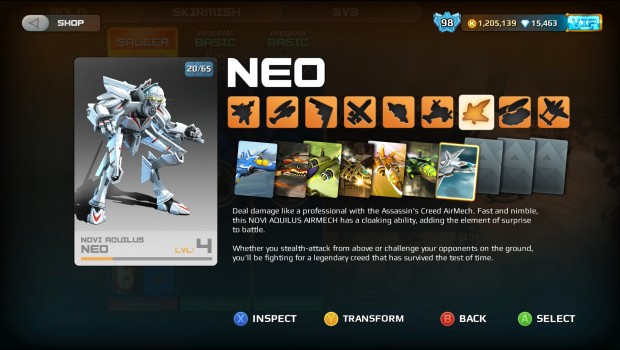 Sydney, Australia — October 2, 2014 — Today, Ubisoft® and Carbon Games announced that AirMech® Arena, the fast-paced real-time strategy game free to play* for all Xbox Live accounts on the Xbox 360 games and entertainment system from Microsoft, now has more than one million players. In honor of this achievement, Assassin’s Creed®–inspired AirMech skins and pets have been introduced to provide players even more customisation options.

“Since AirMech Arena launched two months ago, the community has grown rapidly and now consists of more than one million players. To celebrate this milestone, we are releasing Assassins and Templar AirMech variants to provide a crossover with the fabled franchise for fans,” said James Green, game director at Carbon Games. “We incorporated many of the traits associated with Assassin’s Creed into this new update, including a new AirMech skin for Assassins, and one for Templars, to bring their infamous struggle for power to the battlefields of AirMech Arena.”

Starting today players can transform AirMech Arena gameplay with the Assassin’s Creed Novi Aquilis Neo AirMech, known for its cloaking abilities and stealth in combat. The Templars command the Abstergo Fortis Prototype saucer Mech, prized for its death ray and abduction capabilities. Fans can also deploy Assassin’s Creed pets with any AirMech, bringing the Spirit Eagle, the Apple of Eden and the DNA Cube vial to accompany them in battle. The update also contains additional skins, units and updated maps to be released in the coming weeks.