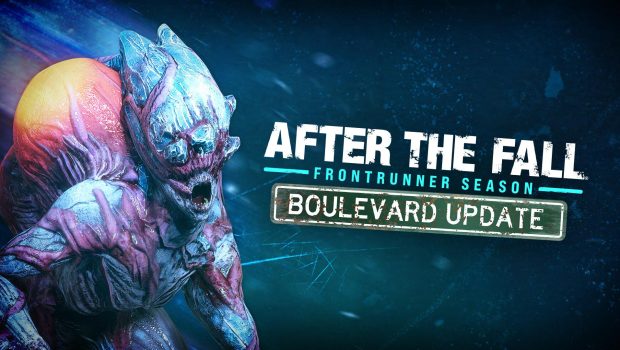 AFTER THE FALL CONTINUES TO EXPAND AS IT RELEASES NEW CONTENT UPDATE, PHYSICAL EDITION AND MORE

Vertigo Games, the VR specialist publishing and development arm of the global Koch Media Group, continues to expand the world of their 4-player co-op action FPS After the Fall. After launching the positively received Horde Mode Update on March 10, Vertigo Games today released the Boulevard Update, as well as the physical edition After the Fall – Frontrunner Edition on PlayStation®VR*. With its launch on PSVR™, new Harvest Runners will be able to start their journey in the frozen apocalyptic wasteland as well. The Boulevard Update is one of the multiple updates coming to After the Fall’s Frontrunner Season, which is available for free to all owners of the game on Meta Quest 2, PSVR (both digital and physical) and PC VR.

To accompany the news, Vertigo Games released a new video highlighting the new Harvest Run mission, the player skin system, new LMG, and the new enemy that are all part of the Boulevard Update

Closely following up on the Horde Mode Update, which brought two Horde Mode maps and the new Revolver, is the Boulevard Update. Both updates have been critically acclaimed by VR specialists and the community. Today’s Boulevard Update brings lots of new content, of which the Boulevard Harvest Run is central. This new map takes players to the frozen streets of Hollywood, where they get to take on Snowbreed in all existing difficulties. A new special type of Snowbreed got introduced to the game as well: the Skimmer. This creature requires a different approach, as it’s the players who have to hunt him down in order to collect a large bounty of harvest. To do so, there is a new LMG for the players to harvest with.

Following the Horde Mode -and Boulevard update are next month’s Free for all PvP mode, the Stockpile PvP map and new weapons, which are all part of the After the Fall – Frontrunner Season. Vertigo Games also has more equipment, such as consumables, devices and special weapon skins planned for April.

With intense 4-player co-op and crossplay (PC VR, PlayStation VR and Quest 2)  at its core, After the Fall offers action-packed co-op gameplay, built from the ground up for VR.  Starting out in a shared space with up to 32 other players across all platforms, players venture out into the remains of post-apocalyptic LA in squads of four, wielding weapons with real-life movements. To stay ahead of their enemies, players scavenge the undead-infested VR world, with new discoveries lurking around every corner. When they’re ready, the competitive Tundradome PvP arena and endless hordes in Horde mode awaits them.

Developed by Vertigo Studios Rotterdam (Arizona Sunshine) and published by Vertigo Games, After the Fall – Launch Edition is now available on Quest 2, PlayStation VR, and Steam. A release on the original Quest will follow at a later date. The physical edition called After the Fall – Frontrunner Edition is now available on PlayStation VR in Europe, Australia, Japan, and launches on April 12 in the USA.